India is in the grip of a slowdown and at a time when virtually every sector is cutting down on hirings, insurance seems to be standing its ground. What’s more, the Mumbai terror attack, and the ones before it, will only increase the demand for insurance.  Manu Kaushik reports. 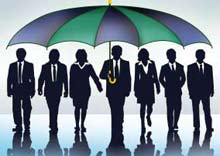 India is in the grip of a slowdown and at a time when virtually every sector is cutting down on hirings, insurance seems to be standing its ground. What’s more, the Mumbai terror attack, and the ones before it, will only increase the demand for insurance.

Says Rajesh Relan, Managing Director, MetLife Insurance India: “We have always seen in the times of high insecurity, purchase decisions of prospective customers become faster.” Little surprise then, several private players—both life insurance and general insurance— are on track with their recently rolled-out plans for hiring in the next two-three years.

Sample these numbers. Max New York Life Insurance, which currently has around 15,000 frontline managers, has put in place plans to increase its headcount to over 25,000 by 2011. It will also strengthen its agent network from 61,000 now to over 300,000 during the period.

Rajan Kalia
Up for grabs at MetLife India are openings for about 3,000 frontline managers and 30,000 agents over the next two months, thanks to the private insurer’s expansion plans in India. Bharti AXA Life has more than 5,000 employees at present and plans to hire an additional 4,500 by March 2009.

But, why is the insurance sector so sanguine in these times of downturn? Explains Rajan Kalia, Executive VP & Head (HR), Max New York Life Insurance: “Life insurance business is one of the most promising industries in India today. According to market estimates, the market size is expected to touch $52 billion in 2010, from $35 billion in 2007-08, a jump of nearly 50 per cent.”

It doesn’t just end here. Even in the current turbulent times, the growth rate of private players has been impressive. Priya Ranjan, Director (HR), Bharti AXA Life Insurance, reels off some numbers. From April-September, the industry has witnessed a growth rate of over 3 per cent. During the same period, private players have grown at 55 per cent, marginally less than the 62 per cent growth rate till August 2008.

Private players, which account for 40 per cent of the market share, have notched up decent growth numbers compared to market leader Life Insurance Corporation, which has shrunk 35 per cent during the same period. “I think even if there is a downturn, the demand for insurance products will continue to remain positive,” says Kalia.

The terror attacks in Mumbai are likely to propel this demand. Says Milind Joshi, Senior Vice President (Operations & Claims), Bharti AXA General Insurance: “In the wake of the terror attacks, people will demand upgradation in existing terror insurance products. As a result, companies will also try to upgrade or develop new products as per the needs of customers.”

At insurance companies, most openings are in Sales and Operations. Says Pradipta Sahu, VP (Sales HR), Bharti AXA General Insurance: “Sales professionals, which account for almost 80 per cent of the total workforce, are the people who drive growth for insurance companies. As the insurance sector is growing at a fast clip, penetration into new geographies needs augmentation of the sales force.”

Bharti AXA General Insurance, which has nine branches across the country, is planning to expand its network to around 29 branches by the end of the current financial year. It is also planning to increase its headcount from 500 now to over 1,900 during the period.


According to industry experts, easing of regulatory norms may not only attract new global players to enter the Indian market, but also drive existing players to step up their base. From a single company a decade ago, there are 22 active players in the market today. While the urban markets continue to be a major contributor to the growth, the next step forward for the insurance players will be to tap smaller markets.

Insurers say that given the slowdown, the acquisition of essential resources such as manpower and real estate has become relatively cheaper.

But it’s no gravy train. As the insurance companies plan to expand their operations across the country, they may require huge amount of foreign capital. Says Ronesh Puri, Managing Director, Executive Access: “In order to grow, all insurance players will require constant capital infusion. Any delays from government in raising the FDI cap into the sector could hamper the growth process.” Other factors that could stymie the growth are consumers’ loss of trust in private insurers in the recent days due to some of the big industry players (like AIG) going bust.

From talent crunch to cash crunch