Room in the middle

The global slowdown matters little to Rana, a young electronics engineer with a leading infrastructure company in Delhi. He still gets job offers every other day. But he prefers to stick to his current job because of the leadership role and learning opportunities it offers.

It is not just Rana. Despite declining business sentiment, the overall Employment Outlook Index (EOI) continues the upward trend earlier surveys had shown, inching up by one percentage point - from 73 to 74 - for the July to September 2012 quarter over the previous one, according to the latest BT-TeamLease Employment Outlook Survey. EOI is the difference between the percentage of respondents who expect hiring to increase in the coming three months and those who expect it to decrease.

In particular, companies are likely to replenish middle-level talent, which has witnessed a seven percentage point increase - from 35 to 42 - the biggest jump among all hierarchies. In contrast, the EOI for both entry-level and junior-level recruitment has fallen, by five and three percentage points respectively. 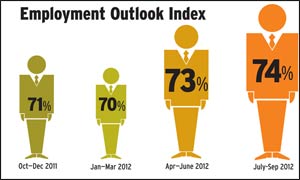 Click here to Enlarge
Even companies that are stuck or facing a slowdown are not cutting back on hiring key talent in the middle to senior positions. "It is very difficult to find good talent at these levels, hence companies either try to retain their best or hire anyone who is good at that level," says T. Shivaraman, Managing Director and CEO of Shriram EPC, which provides turnkey solutions for water treatment and transmission, cooling towers, thermal power plants, etc.

Despite the overall economic gloom, three sectors expect increased hiring. Manufacturing and engineering posted a two percentage point increase in EOI - from 51 to 53. Infrastructure, and health care and pharma have grown by a percentage point each - from 65 to 66, and 68 to 69 respectively.

"There is a lot of activity in the manufacturing sector," says Sarada Jagan, Executive Director of human resources (HR) at Sanmar Group, which has businesses in chemicals, shipping, engineering and metals. "We find a good pool of engineering talent here and certainly there is hiring activity, as well as attrition." Shivaraman is equally buoyant.

ALSO SEE: Best Companies to Work For in India

"We are definitely hiring for our projects related to water and those which involve the government, though there is a slowdown related to the power segment." The health care space is also booming, and is expected to touch $280 billion by 2020. It has emerged as one of the largest service sectors, with an expected gross domestic product (GDP) spend of eight per cent in 2012, up from 5.5 per cent in 2009. There has also been a steady inflow of foreign direct investment (FDI) worth $1.34 billion to hospitals and diagnostic centres. Data from the Department of Industrial Policy and Promotion (DIPP) shows the pharmaceutical, and medical/surgical appliances industry registered FDI inflows of $9.19 billion and $521.45 million respectively between April 2000 and March 2012.

There is a rush to expand among most major hospital chains, given the crippling shortage of hospital beds. According to a report by consulting firm Technopak, India has 13.7 lakh hospital beds, but only 50 per cent are functional. "There is certainly a huge demand for talent in the health care space as activity is ramping up," says P. Dwarakanath, HR head at Max India Ltd, which runs, among other businesses, Max healthcare centres in Delhi, Gurgaon, Noida and Punjab. 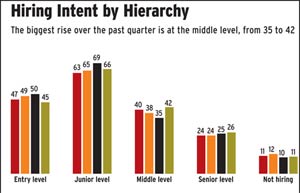 Click here to Enlarge
At 73 and 80 respectively, the retail and fast-moving consumer goods (FMCG), and telecom sectors expect to maintain status quo in hiring. "This is not surprising as these are maturing segments. There is a settled atmosphere in these spaces, given that there are no major upsets yet. People are being hired to compensate for attrition," adds Dwarakanath. Geographically, hiring in metros remains strong, with Chennai recording the maximum growth.

Tamil Nadu Chief Minister J. Jayalalithaa has announced several infrastructure projects in the state, which may account for the optimism. These include the four lane bridge connecting Tiruchirappalli to her constituency Srirangam worth Rs 81 crore and the Chennai Peripheral Road project, estimated at Rs 1,420 crore, that will connect Ennore Port and Mahabalipuram. The Nagarjuna Oil Refinery will also see an additional investment of around Rs 12,000 crore, while the Tamil Nadu Industrial Development Corporation (TIDCO) has signed an MoU with GAIL (India) Ltd to float a new company which will invest around Rs 10,000 crore in pipeline infrastructure and power projects.

The auto and its ancillary industries in the state, with players such as Yamaha, Ford, Daimler and Eicher announcing a series of ventures, are also likely to hire liberally. "Our attempt was to get recruiters to share their concerns and give us the fine print in terms of hiring trends," says Sangeeta Lala, Cofounder and Senior Vice President, TeamLease. Which are the areas of concern? "Some of the traditional industries seem to have been insulated and they are growing and also hiring." she adds. "We clearly noticed a cutback in the support functions and services space."

However, leading education company Educomp Solutions bucks the trend mainly because spending on education is considered nonnegotiable by most families seeking a better future. Following some attrition in the support functions, it has been hiring vigorously. "This year's first quarter has seen a net addition of around 50 employees.

We expect to keep up hiring momentum for some of our key businesses that are witnessing a steady growth path," says Sanjay Jain, Group CEO. Educomp Smartclass, for instance, has added 40,023 new classrooms in 2011/12 compared to 27,154 in 2010/11. The other growth driver for the company has been its expanded presence in K12 schools.

While the process of hiring and attrition runs its normal course across business divisions, companies are making a conscious attention to hire productive talent and retain it. Market conditions require divisions to realign resources to improve efficiencies in accordance with profitability targets.

Yet, though not reflected by the EOI, the slowdown has begun to have some effect. Says E. Sudhir Reddy, Chairman and Managing Director at infrastructure giant IVRCL: "We find core infrastructure and construction work stalling with no hiring or starting of new projects."

Shekhar Arora, Executive Director, HR Strategy, Ashok Leyland, the leading commercial vehicle manufacturer, is worried too. "I wish the sentiment of the last quarter had continued. Unfortunately, there are signs of slowdown," he says. Most auto majors expanded capacity last year but now, because of high interest rates and poor business sentiment, are turning cautious. "We have become careful. But we will be honouring all our commitments - especially those made during campus recruitments," Arora adds.

Meanwhile, in what appears a knee jerk reaction, information technology (IT), information technology enabled services (ITeS) and banking/financial services sectors expect a decrease in hiring. "We are certainly in sluggish mode, though we did hire up to nine per cent last year," says Mohan A.V.K., Executive Vice President and Global HR Head at EXL Service, which provides outsourcing and transformation services. He, however, remains optimistic, adding: "Sentiment will pick up in the last quarter of this year."

2012 going to be tough for jobseekers