A host of companies across the world is eyeing Indian employees. More and more of them, especially multinationals resuming expansion plans that had been put on hold during the economic slowdown of 2008/09, are looking to hire Indians and post them across continents.

"Indians are perceived as ready to adapt to different cultures, diligent, and increasingly open to relocating," says Kamal Karanth, Managing Director of the Indian arm of global recruiting agency Kelly Services. "IT jobs are the most transferable, but other sectors like engineering, medicine and pharmaceuticals across the world also want to employ Indians." 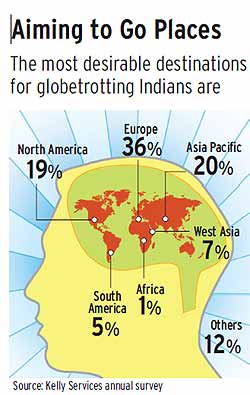 In the last three decades of the 20th century, Indian blue-collar workers were aggressively wooed by the sparsely populated Gulf countries to perform primarily menial jobs. But now there is also growing demand for Indian white collar workers - and not just in the Persian Gulf. Many countries with ageing population or short of trained people in certain sectors are only too willing to bring in qualified Indians.

Australia, for instance, needs 35,000 mining engineers, and has lately employed a number of Indians with this specific skill. Facing a shortage of doctors, Singapore recently decided to recognise medical degrees from two Indians institutes, including the All India Institute of Medical Sciences. "In countries that are short of manpower for specific skills, companies are looking to recruit from overseas, and Indians often fit the requirements best," says Karanth.

And Indians too are showing a greater willingness to relocate than before. Around 90 per cent of Indians who responded to a Kelly Services survey on job opportunities and migration said they would be willing to move overseas if a better job or higher salary was offered. "We found many of our Indian employees keen to get multi-country exposure," says Sukhjit S. Pasricha, Director, HR, Airtel Africa. "We already have around 80 Indians working in different African countries in mid to senior leadership roles." (Bharti Airtel entered Africa in June 2010 when it bought over the Africa operations of Kuwait-based Zain Telecom.) Hurdles, however, remain.

Immigration departments in many countries are still very stingy with employment visas. But an intracompany transfer - in which a person joins the Indian branch of a multinational and subsequently gets posted overseas - reduces visa hurdles considerably.

Other obstacles include visa stipulations in certain countries that prevent the spouse of the person relocating from taking up employment there. But companies often compensate. "A relocation reimbursement is standard, but some companies may increase compensation to make up for the restrictive visa norms," says Karanth. "There are increasing opportunities now for Indians to perform on the world stage.

Go for job profile, not designation

Get paid for doing good