As good as it gets

IT and ITeS stage a smart rebound. Hiring volumes are set to go up.

What is the biggest worry of information technology, or IT, companies going into 2011? With the job market looking up, it is employee attrition. The sector is hiring in big numbers. Little surprise then that in the BT-Team-Lease Employment Outlook Survey for the January-March 2011 quarter, the employment outlook for the sector rises to 82 percentage points - the most in the last 10 quarters.

Click here to Enlarge
Says Nandita Gurjar, Senior Vice President and Group Head of Human Resources at Infosys Technologies, one of the largest hirers in IT services in India: "The optimism is back in the industry. After two years, we are seeing a lot of positive movement in terms of hiring." Gurjar, however, cautions that hiring in the sector is due to people moving around and not necessarily a function of new jobs getting created.

Kamal Karanth, Managing Director in India of leading staffing and recruitment company Kelly Services, however, is clear that in terms of hiring numbers, IT takes the lead. "We are talking 60,000-80,000 jobs in IT in the January-March 2011 quarter," says Karanth. Smaller firms such as Geometric, which deals with engineering solutions, services and technologies, are ramping up, too. "The next ramp up continues to be in a couple of hundreds. The profiles in demand are in vanilla as well as niche skills in the software and engineering services," says Rani Desai, VP and Head of HR & Organisational Development at Geometric.

V. Krishnan (R), VP, HR, Dabur India
Other sectors hold steady, too, especially IT-enabled Services, or ITeS, which seems to be following IT in volumes. Retail & fast moving consumer goods, or FMCG, have kept up the momentum, so have telecom and infrastructure. The sector that seems to be losing momentum at least for this quarter is manufacturing & engineering. It has seen a drop of eight percentage points to 60 index points, the lowest for any sector this quarter. 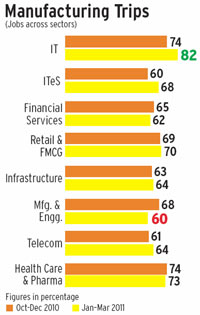 The three sectors in the limelight this quarter - IT, ITeS, and Retail & FMCG - have all touched their respective 12-month highs in business outlook this quarter. The business sentiment for Retail & FMCG has shot up by 10 percentage points to 77 index points, but the hiring intentions remain cautious with an increase of one percentage point to 70 index points. Talent acquisition heads in Retail & FMCG, however, see this business sentiment translating into more jobs in the first two quarters of 2011. 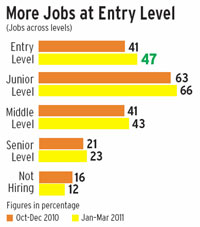 Says V. Krishnan, VP of HR at Dabur India: "The market is opening up and all FMCG companies are doing well. With the favourable economic growth, impressive expansion of other sectors like telecom, FMCG will once again become the foundation for picking talent for other sectors."

Dabur is hiring across functions and levels. Over the next one year, the company plans to add about 80-100 people on its payroll and as stockists. Dabur has entered the skin care segment rather vigorously and over the past three to four months, it has hired 175 women as beauty advisors through third-party channels.

It plans to take this number to 350 by the end of March. "Both company and third-party hiring have gone up. We hired a lot of senior-level executives in the south in the last quarter, owing to our southern expansion," adds Krishnan. Samsung India has already readied plans to hire more than 500 in the first quarter. Says Sanjay Bali, VP of HR at Samsung India: "We will be hiring in Sales & Marketing as well as R&D."

Experienced talent is back in demand. Middle-level managers, who had borne the brunt of the last slowdown, are being hired across companies as well as sectors. "With business sustaining positive sentiment over the last few quarters, a lot of cross-sector movement is being seen in the middle level," says Karanth.

A case in point is Samsung India. The company is hiring business heads not only from consumer durable companies, but also from other sectors. Raj Kumar Rishi, the new AV Business Head, has come from HP India, where he was Director of Inkjet & Web Solutions and Consumer Business. The company has also roped in Mahesh Krishnan as VP and Head of Home Appliance business. He was VP and SO Leader at Philips Electronics India prior to joining Samsung India.

HR experts such as Dhananjay Bansod, Chief People Officer at Deloitte India, see a churn at the senior level, too. "The job market is opening up, and the positions left empty at the time of recession are being filled up. A churn may take place at the senior level, at the top of the pyramid, but it will take at least 6-9 months for an increase in volumes," he says.

Hiring at Deloitte has gone up over the last three quarters, as there has been an increase in the demand for services and the business has expanded in terms of volumes. "We will hire about 400 people in the current quarter, and the maximum hirings are at the level of 0-7 years, for the positions of consultants, senior consultants and analysts," Bansod adds.

In the first quarter of 2011, there is something for everyone in the job market.

Salary hikes to get better