At the recent NASSCOM Diversity and Inclusivity Summit 2010 in Bangalore, a worried audience from the tech and back offi ce business sat with a set of statistics. Women in the industry accounted for more than 30 per cent of the workforce but less than four per cent in leadership (CEO and very senior) roles. Where do the women disappear along the way? Will fl exible working hours help retain women in middle and senior leadership roles, the industry asked. Well, there is some good news and some bad news. 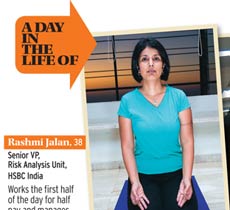 The lesson: Unless implemented effectively, flexi-work options do not succeed. Says Bain Partner Julie Coffman: "The biggest reason given for not taking advantage of these models is fear of losing the respect of one's supervisor and/or peers." The Bain survey was global, but BT takes a look at the nuts and bolts of fl exi-work in India.

Two years ago when HSBC India rolled out fl exi-work options for its employees, among the fi rst to opt for the initiative was Rashmi Jalan, now Senior VP of the Risk Analysis Unit. She had her second child in November 2007 and was desperate for a work arrangement that would have kept her career going and at the same time allowed her to pay attention to her two sons.

Options galoreJalan chose the half work, half pay arrangement, or part-time work, where employees are expected to work four and a half hours a day and where the work timings depend on the type of job. The other two options offered by HSBC included staggered hours and telecommuting.

In the staggered work arrangement, an employee has to put in nine hours of work with mandatory presence during core business hours but has the fl exibility to determine the start and end of his workday. In the telecommuting option, an employee is allowed to carry out his or her responsibilities from outside offi ce using electronic access, but is expected to attend all scheduled meetings.

"Initially I had apprehensions about people thinking that I was looking at the job as a fi ller. But that has not happened," Jalan says. Part of the credit goes to HSBC, which got down to changing the mindsets of its employees soon after launching the programme. "We realised early on in our implementation journey that frequent communication of the policy, leadership support and showcasing of successes will help achieve our objectives," says HR head Vikram Tandon.

It was a challenge, nonetheless. When the bank unveiled the policy in the summer of 2008, it simultaneously launched workshops for its managers and employees. These workshops were facilitated by consultants from International Business Machines or IBM, who had extensive experience in this area and shared it with the HSBC employees. These workshops were organised in all regions and each event was fl agged off by a senior manager demonstrating commitment from the leadership team. Arindam Lahiri
Later, HSBC launched a success story series, which every month showcased the experiences of staff who had opted for fl exi-work arrangements. Alongside, the profi les of managers who had been successful in driving fl exi-work in their teams began to be published. The rationale for this was to highlight the importance of supervisor support in making teams look for creative ways of doing their jobs to enhance productivity levels.

A way of lifeFlexi-work is a way of life for the employees at IBM India. When Bangalore-based Chitra Iyengar, 37, decided to adopt a child in 2006, she fi rst availed of maternity leave, but became serious about fl exi-work after an encounter with her manager who said: "I do not care whether you sit in the park or at home. I am concerned with your deliverables". IBM is well-known for its culture of employees working from remote locations and teams distributed in different time zones. For Iyengar, it was liberating to realise that work did not mean a place she went to, but something that she did. She tried different combinations of fl exi-work: IBM has six "fl avours" available, including customised timing and telecommuting. Chitra Iyengar
Sometimes Iyengar goes to offi ce only in the fi rst half of a week and sometimes she works three days a week depending on her work and personal needs. She often avails of the day-care facilities provided by IBM for her four-year-old son, right across from her office.

For Iyengar, a career-oriented person who loves to work, it took a lot of effort initially to adjust to working from home. "I did have a lot of questions and a whole lot of talking with my mentors and seniors," she says. "Flexi-work is a defi nite enabler in my life… my husband is a neurosurgeon and he has to be a call away anyway."

When Iyengar was grappling with the issues thrown up by fl exiwork, the organisation, too, was dealing with issues associated with it. Says Kalpana Veeraraghavan, IBM's India Diversity Manager: "Flexibility is a double-edged sword. It needs to be managed effi ciently." Veeraraghavan should know. Her company has been among the fi rst movers globally to put in place "work-life integration". In India, it started in 2000.

The mindset hurdleHer big challenge is overcoming the overall mindset about fl exi-work in India as it entails measuring output by deliverables and not by face-time. As a culture, India is not used to it. Managers in the company are taught to handle potential issues such as "I am concerned that if I cannot see my employees, I will not know whether they are working or not"; "Shouldn't we approve fl exi-work arrangements for top performers only?" or "Will fl exible work from home come in the way of teamwork, which our organisation so emphasises on....?" And, fi nally, an issue that fi nds resonance among employees considering fl exible work: will taking advantage of fl exi-work arrangements make it harder for someone to be promoted?

"Not at all," says Arindam Lahiri, Vice President of Training at DLF Pramerica India, an insurance fi rm. For close to two years, Lahiri has been working fl exi-hours due to health reasons - he suffers from high blood pressure and once fainted in offi ce. A resident of south Delhi, he hates going to Gurgaon to work during the rush hour. So, he reaches offi ce by 8.30 a.m. and leaves by 5.30 p.m. When he opted for fl exi-work, he did have concerns though. "My CEO comes in at 8 and leaves at around 5.30 p.m. If they can manage their bigger roles so effi ciently, so could I." But Kapil Mehta, Lahiri's CEO, does not see any problem with that. Flexi-work hours include some core work hours when the employee is expected to be in offi ce while for working from home, there are a stipulated number of days (two) that an employee can avail of this option. "Employees continue to be a part of all important mainstream projects and are able to interact with colleagues on a regular basis," Mehta says.

Where are the leaders?

Managing up, down and across