There are companies in many sectors that are bucking the overall hiring trend. These are financially-strong companies that want to be more competitive in the market. Upping the hiring momentum, these companies discover a slowdown is a good time to cherry-pick talent. Saumya Bhattacharya, E. Kumar Sharma & N. Madhavan report.

In the past five months, the number of people employed at Hyderabad-based Maytas Infra, the listed infrastructure development company promoted by the family of Satyam Computer Services’ founder promoters, has come down from 3,000 to 1,800. The huge outflow of talent from the troubled 23-year-old company has not stemmed yet. 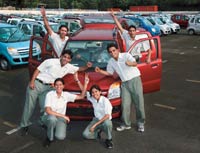 What slowdown? Fresh hires at Maruti Suzuki India get a smooth start in rough times
Expat talent is fleeing shaky real estate markets of Dubai and returning home. What’s new and what’s the connect? The connect is Hyderabad-based IVRCL Infrastructures and Projects, which has just hired 100-odd people, which include ex-employees of Maytas Infra and Indian returnees from Dubai.

“In the last six months, we have not advertised for job openings but since January this year, we have so far got 700-750 unsolicited job applications,” says E. Sudhir Reddy, Chairman & Managing Director, IVRCL Infrastructures and Projects. During this period, he has added 100-odd middle and senior managers (DGM to VP, going up to President).

By no means is Reddy alone. In Hyderabad and elsewhere, a clutch of corporates is in hiring mode, driven by the belief that the current market is ideal for cherrypicking talent. Who is hiring? Companies in sectors like telecom and infrastructure that are even now expanding and organisations looking to fill skill gaps in their talent pool.

Building careers
Infrastructure companies are clearly the biggest job creators. For instance, IVRCL, according to Reddy, currently has orders worth Rs 15,000 crore. Hyderabad-based Nagarjuna Construction Company (NCC) has bagged new projects worth Rs 5,500 crore in 12 months up to March 2009.

“We have been growing at 15-20 per cent per annum and we are recruiting accordingly. The availability of manpower is not such a problem today,” says A. Ranga Raju, MD, NCC. The company is looking at hiring mostly civil engineers with execution capabilities, construction management capabilities and experience in running a project across verticals, be it buildings, roads or irrigation projects.

IVRCL is hiring people with skills in design, project management, risk management. In earlier years, the talent requirement was more “project-related people and in administration and finance function”.

“The talent availability has certainly improved,” says Issac A. George, company CFO, but clarifies that’s not the reason they are hiring. “Our model is different and whether it is a downturn or a good time, we hire only when we get a project.”

Have growth, will hire
There are companies in other sectors, too, that are bucking the overall hiring trend. These are financially-strong companies that want to be more competitive in the market.

The company has stepped up its hiring impetus in enterprise solutions, non-voice value-added services like content and e-payment. “We continue to hire from campuses; that is our ‘build’ strategy,” says Krish Shankar, Director (HR), Bharti Airtel.

The other component of this strategy—buy—is no less significant. Around 25-30 per cent of senior leadership at the company comes from outside. “We need talent for areas fuelled by growth and special skillsets to take the game further,” adds Shankar.

So is the case with car major Maruti Suzuki India, where the focus on talent acquisition continues with the company’s long-term health in the spotlight. And that’s exactly what the doctor ordered. “A hiring strategy for the downturn should focus on plugging skill gaps, if any, that would help a company through the downturn or position it favourably to take advantage of the upturn when it happens, as indeed it will,” says R. Sankar, Executive Director (People & Change), Pricewaterhouse-Coopers (PwC) India.

Says S.Y. Siddiqui, Managing Executive Officer (HR, Finance and IT), Maruti Suzuki India: “There are many indicators that lead us to continue focussing on the long term. If we look at business in spite of the downturn, the company has retained its marketshare.”

Allen Sequeira, Senior VP (Corporate HR & Management Development), M&M
Maruti Suzuki has a portfolio of 12 models, four gasoline and one diesel engine series. This large portfolio needs product refreshment and changes so that the company is able to remain ahead of the competition that includes global players.

The company is investing in a world-class R&D centre that would include a test track and advanced testing facility for cars. “We have increased our engineering strength from around 200 engineers, two years ago, to more than 700 and will take it to 1,000 very soon. These engineers are being trained in India as well as Suzuki Motor Company, Japan, to take on leading roles once the new facilities commence,” Siddiqui adds.

If you fancy working at Maruti, the middle and senior level positions are broadly in Design and Development in areas of Engine, Transmission, Body Electricals, Styling and product planning, Brakes, Suspension, Safety & Crash, Interiors, etc. Around 350-400 openings are for Graduate Engineers, Management Trainees, Executive Trainees and Diploma Trainees.

Infosys Technologies is hiring in sales and marketing and also those with niche skills that add value to its business. “In a downturn, financially-strong companies who want to be more competitive in the market hire selectively, especially sales and marketing people, so as to sharpen their interaction with the customers. The hiring is not industry-specific, but in every industry, there will be strong companies that will resort to this strategy,” says T.V. Mohandas Pai, Member of the Board and Director (HR, Education & Research and Administration), Infosys.

At M&M, selective hiring is taking place in all the group companies. “We are a growing economy and when it comes to global economic growth, the centre of gravity has shifted to India and China. Under the circumstances, selective hiring will only help us prepare for the future,” says Sequeira.

Meanwhile, BPO firm EXL Service is hiring at all levels, right from the executive to mid-level management. “We have recently signed up new significant accounts and are in the process of scaling up processes for some of our existing customers in the last three quarters. Therefore, we are in the process of hiring to fulfil the fresh demand for talent,” says Amitabh Hajela, VP & Global Head (HR).

Tactical moves
A recent survey on ‘Managing the Effects of the Downturn’ conducted by PwC India shows the top three areas for organisations for the time being are recruitment, employee policies and compensation.

While the larger companies surveyed said they are modifying their hiring plans to align them with revised growth estimates, the smaller employers are keener to focus on talent and performance management. Good talent at affordable cost emerged a big factor in downturn recruitment.

Reasons PwC’s Sankar: “Salary increases have abated in general. Also, the collapse of MNC banks has released highly skilled talent, which is now affordable.” It’s a tactical move for most as corporates realise that when turnaround happens, they may not get the pool of talent they are looking for. “Corporates recruit in a downturn as they anticipate recovery in a matter of time. In a downturn, lot of talent gets displaced. In fact, you can get some excellent talent at a reasonable cost when the market is down,” says Sequeira.

Some like Bharti’s Shankar have seen little connect between affordable talent and talent acquisition. “In talent, you cannot be so opportunistic. As a company, we do not believe in it. In a downturn, too, it is unfair to hire at low prices,” he says.

However, behind this arithmetic is a smart strategy that certain organisations are keenly following. Aviation biggies may find the going tough, but lowcost carrier SpiceJet is jazzing up its plans for growth. It’s hiring across functions and across levels. The company has hired 116 people from January-March 2009. Of these, 5-10 per cent are replacement for employees, who have been asked to leave.

“There is growth and we have added four aircraft in the last three months,” says Sanjay Aggarwal, CEO, SpiceJet, adding: “Because talent is available at fair price, we have brought in some good managers at the mid-level.” Eyeing growth, Aggarwal, last fortnight, roped in Head (Customer Services) Sarabjeet Kaur and Senior VP (Marketing) Anish Srikrishna.

Organisations that have a hiring strategy for a downturn certainly get a stamp of approval from HR experts. “Companies that are thoughtful in both laying off and hiring stand to gain, as opposed to those who cut headcount thoughtlessly across the board or those that hire indiscriminately,” says PwC’s Sankar. Is India Inc. listening?