Can salary cuts save jobs? Perhaps, but they co-exist in times of downturn. 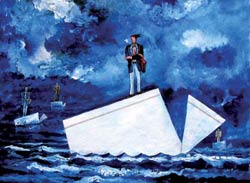 In February 2009, Hewlett Packard Chief Executive Mark Hurd announced pay cuts for most HP employees. Objective? To offset a 20 per cent decline in revenue and save 20,000 jobs in the company’s product divisions.

Although he did not exclude the possibility of some job cuts, Hurd stressed that major workforce reduction was not the best thing for HP at this time. Hurd said he would reduce his own base salary by 20 per cent, executives’ pay by 10 per cent to 15 per cent, and most employees’ salaries by 5 per cent.

It’s early days yet to say whether HP manages to turn the corner by opting for wage elasticity, but it has surely managed to stem the mounting toll of pink slips for now. Closer home, Apollo Tyres also decided to wield the scalpel instead of axe. The company was reeling under rough weather in the second and third quarters of 2008-09. Business was under tremendous pressure with unmet targets and weak demand.

Tapan Mitra
It was time for a trim. The first on the chopping block was not its employees, but variable pay packets that form a big chunk of salary at Apollo Tyres. At junior manager level, the variable component is 7 per cent of total cost to company, which goes up to 30 per cent at the functional head level.

What’s more, the company hands out variable pay every quarter. Since the targets were not met in the last two quarters, the variable pay was done away with completely. So, have these cuts helped save jobs? “Yes. We have to look at overall costs. It definitely has huge implications on jobs,” says Tapan Mitra, Chief (HR), Apollo Tyres. “My objective is to contain HR costs. There are 10,000 people working in Apollo Tyres, including 2,000 white-collar workers. When variables come down, we are saving a lot on costs,” he adds.

To oil its wheels further, the company is now looking at cutting the flab based on performance. The first option is to redeploy the non performers with some training. If not, the company looks at letting these employees go. Around 5 per cent of its white-collar employees fall under this category on the basis of appraisals for 2008-09. So, is there a trade-off between salary cuts and job loss? HR experts say when cost cuts are needed, there are no right answers in talent management. It depends on how an organisation is positioned in the turnaround cycle. (See Which Cycle Is Your Organisation in?).

Suresh Tripathi
According to Pothen Jacob, Head, Human Capital Group Practice, at HR firm Watson Wyatt: “Salary cuts are a better approach for turnaround in a shorter time. The company can bounce back and make reverse correction. However, if the turnaround time is longer, salary freeze and job cuts are the order of the day.” According to Jacob, at the upper extreme, organisations with longer turnaround time are planning to reduce as much as 15 per cent of the workforce to bring down the cost of labour. R Suresh, Managing Director, Stanton Chase, points out that downward salary revision and retrenchment are two separate subjects. These are independent areas and can co-exist.

Here’s why. Salary cut is more for operational efficiency while downsizing is happening as slowdown has put paid to growth plans. In such a scenario, organisations are arriving at their own answers to the salary cut vs job cut riddle. A case in point is SRF Ltd. that considered both pay cuts and job cuts, but did not go ahead with either. In December 2008, SRF was forced to close its technical textile plant in the Manali Industrial Area in Chennai. Its plants in South Africa and Thailand were also running out of steam.

Faced with the urgency to tighten its belt, SRF went the extra mile scouting for options. Job cuts, it decided, will be a knee-jerk reaction. “There are better ways of managing costs. Salary cuts and job cuts are the prescriptions that organisations offer. Instead, we went to the employees and asked them for ways to reduce costs,” says Suresh Tripathi, President, Group HR, SRF Ltd.

The cost-cutting strategy sans job or salary cut worked for SRF. Its Chennai plant restarted last week of February. In the short-term, the company has managed to shore up employee commitment. If the commitment is high, initiatives get absorbed easily. In the long-term, the company is looking at the reduced attrition levels. “It was a good time for us to look at our values, test them and prove them,” says Tripathi.