The excitement and glamour of advertising is luring professionals from the unlikeliest of fields. Dumping their “safe” jobs and (often) better remunerations, doctors, IT consultants, hospitality industry professionals and rural marketers are all heading to the organised chaos of advertising.

The excitement and glamour of advertising is luring professionals from the unlikeliest of fields. Dumping their “safe” jobs and (often) better remunerations, doctors, IT consultants, hospitality industry professionals and rural marketers are all heading to the organised chaos of advertising.

When Nirmallya Roy Chowdhury, Co-creator, NLX, the marketing arm of JWT, decided to quit his marketing job in Wester International, for advertising, his family was puzzled.

His father thought Roy Chowdhury needed counselling as he seemed to be taking the wrong decision. Then, there’s Nitesh Tiwari, whose father was upset with him for quitting a safe career in one of India’s leading software firms, and joining an advertising agency as a trainee.

It is only after he saw the ads created by Tiwari on TV that he reconciled to the fact that his son was doing a “reputed” job.

But such decisions take lots of guts and a genuine love for advertising. Yamini Nair, Creative Supervisor, Ogilvy & Mather (O&M), says that after she successfully completed three years of a rigorous hotel management course in 1995 and landed a good job with Leela Kempinski, Mumbai, her parents began to believe that hotel management wasn’t a bad career choice after all. But, she says: “I found the ‘plastic smiles’ a bit too plastic and the job fairly non-cerebral”.

So, she broke her two-year contract with her employer and jumped into advertising. “After leaving Mumbai, I went back home to Trivandrum to figure out what to do next.

One day, a close family member drew my attention to a newspaper advertisement by a well-known local agency called Chrysalis Communications calling writers for a copy test,” she says.

Since she had a literature background and loved writing, she gave it a shot. “I sat for the copywriter’s test and was lucky to land my first job in advertising as a trainee copywriter.” 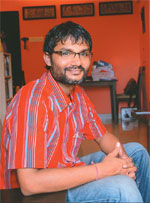 Then, it was time to do something for himself. He says the change came after numerous and often painful rounds of contemplation. “I was pretty committed to the change and arrived at the decision after lots of discussion and contemplation. I also discussed my apprehensions with my folks, so it wasn’t that I sprung this decision on them suddenly,” Agarwal explains.

Roy Chowdhury explains that he opted to switch over to advertising because “I felt it would give me a wider range of knowledge as I would work on various product and service categories unlike the monotony of dealing with one brand.”

The intangible returns are obviously big enough to beat the lure of other attractions.

Tiwari, who is a metallurgical engineer from IIT Bombay, visited several foundries across the country after he completed engineering and then took a job with a leading IT firm in Mumbai. “I realised that I was not passionate about software like my colleagues and did not want to continue in my mundane job any longer. I wanted a more stimulating environment; hence, my switch to advertising,” says Tiwari, adding that he is thankful to FCB-Ulka, which believed in him and gave him his first break as a trainee copywriter. “The pay was a pittance,” but that did not really deter him.

Dr Mehul Shukla practised as a general physician for eight years, and got tired of treating fever and diarrhoea. So he did an MBA and joined Rhone-Poulenc as a management trainee first and after a year, moved to Schwabe India as its Ethical Brand Manager.

That’s where, while handling over-thecounter brands, he came into contact with advertising agencies. It was like tasting blood. He knew he wanted to be on that side of the business. Now heading Lintas’ Healthcare Division, he uses his education and experience to chalk out healthcare communication programmes.

“I wanted to do something challenging and, therefore, switched to advertising. It is mentally stimulating and challenging— I can strategise as well as come up with communications ideas that will actually work for brands.”

Advertising is an industry where only the passionate survive, it seems. There are no half measures. And the perks of excitement outweigh other more tangible benefits like reasonable working hours and better remuneration in other industries. As Agarwal says, he chose to get into advertising because of the freedom to express.

He says: “For any creative person, this freedom to express is essential. It’s wonderful to be able to walk into an office that’s perpetually bubbling with thoughts and ideas, all geared up to make the next big breakthrough campaign.”

Secondly, he says, the diversity of people one meets is a huge turn on. “Where else would you get an opportunity to meet a funky copywriter, a dismal account manager, a perpetually harassed servicing executive, a pioneer in advertising, some truly talented clients, and a brand list that can vary from oil to a web site, a health insurance scheme or a BPO?” he asks. Sudhir Nair, VP, G2, the marketing arm of Grey Worldwide, says he grabbed the best opportunity that came his way. “On the creative front, G2 provided a wider horizon. Now, we have been doing things which are beyond just campaigns. G2 provides other services such as web development, creates web-based processes for clients, provide CRM Services and the like,” he says.

Most say it was not easy to get a break in advertising as agencies prefer insiders, i.e., people from rival agencies when hiring. It’s a small world where everyone knows everyone else; so, most job offers are on word of mouth basis. “The entire set-up is different from a normal work set-up. When I went for the interview at FCB-Ulka, I was asked several times to think over my decision of quitting a leading software firm and coming on board as a trainee. They actually tried to dissuade me from joining advertising, but seeing my persistence, finally gave in and offered me a trainee copywriter’s job,” says Tiwari.

Roy Chowdhury admits he took some time to adjust to his new life. “Initially, I found the cultural change, the frank and chaotic environment and the absence of a clearly defined hierarchy unsettling,” he says. And after engineering, advertising terms were Greek to Tiwari. “I had a tough time understanding advertising terms and I had no idea of brand building. I did not even know how to write a TVC (television commercial). But learning on the job was the best possible way and I soon got into the groove,” he explains.

Apart from having to get used to a new way of life, all of them agree that the first thing they had to adjust to was the lesser money. Roy Chowdhury and Tiwari both say they would be earning far more in their marketing and software jobs. For Dr Shukla, the change was possible because his wife, also a doctor, took on the responsibility of paying the bills for two years. That said, the pay in the industry is adequate, though it does not compare any more with what many other sectors pay.

So, if you have passion in your belly, a zest for creativity and a measured disregard for a fat bank balance—and you are tired of your current straitjacketed career—then advertising agencies may well have that dream job waiting for you.