Aiming for the top

Shyam S. Bhartia is pursuing his MNC dreams with a vengeance. Last week, the Chairman & Managing Director of the Rs 1,610-crore Jubilant Organosys snapped up Canada’s Draxis Health for $225 million (Rs 900 crore) to bolster his group’s presence in the lucrative North America region. 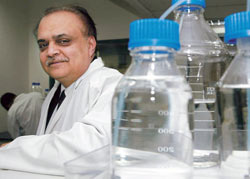 Shyam S. Bhartia
April seems to play a special role in his global dreams. In April last year, he acquired the US-based Hollister-Stier Labs for $122.5 million (Rs 514 crore then) in what was billed as the largest overseas acquisition in the contract manufacturing sector by an Indian company.

Jubilant, which has a leading presence in pharmaceuticals, agrochemicals, construction, food & beverages, textiles, tyres and paper & packaging, is already one of country’s largest players in the Custom Research and Manufacturing Services (CRAMS) segment; so what was the rationale behind this latest acquisition? “Draxis brings along Sestamibi; a high-margin radiopharmaceutical (a radioactive compound used as tracer in the diagnosis and treatment of diseases) used in the cardiac-imaging market,” says Bhartia, adding: “The second attraction is Draxis’s multi-year $120-million (Rs 480-crore) contract for supplying multiple non-sterile specialty semi-solid products to Johnson & Johnson.”

Under Bhartia, Jubilant has turned into a leading contract drug manufacturer, which exports its products to 50 countries, including the US, EU and Japan.

He has steered the company, earlier called Vam Organic Chemicals, into foods, infrastructure, oil & gas, aerospace and IT. For the record, one of his companies is also the franchisee for Domino’s in South East Asia, he owns the sole Audi dealership in South India, and he is also the sole representative for Bell Helicopters for commercial avionics in India. His stated goal is to be among the top two players in every segment his companies are present in. He’s already there in several of them, and hopes to get there in those that he isn’t.