SARSON KA SAAG
Chef Ravitej Nath's winter pick is a North Indian classic. He first ate sarson ka saag while driving through Punjab on a food exploration trip and instantly fell in love with the dish's innate simplicity. Every Indian family has its own recipe for preparing the dish. Some are purists, refusing to dilute the heat of the mustard leaves with any other greens.

This simple dish paired with a cold lassi has been a North Indian staple for centuries
Ravi's recipe-to accommodate more sensitive palates-uses a bit of fenugreek, spinach, jaggery and radish to temper the pungency of the mustard. This blend is then pounded and slow-cooked in a traditional tandoor overnight.

Just before plating, Ravi adds a crackle of spices and rich, classic dish is ready to eat. For the complete north Indian experience, Ravi serves the sarson ka saag with makki or corn rotis and that quintessentially Punjabi beverage, lassi.

An American classic, pumpkins are standard fare for the holiday season that lasts right until christmas
PUMPKIN CASSEROLE Glenn Eastman, Executive Chef, The Leela Palace, Delhi
Chef Glenn Eastman's favourite winter dish honours his American roots. His first memories of eating pumpkin go all the way back to his family kitchen where his grandmother would whip up holiday meals. "I remember my grandmother doing candied pumpkin and pumpkin pies at home in our family kitchen," he says.

American families typically turn to pumpkins around Halloween and Thanksgiving. However Glenn says they are incredibly versatile. This large vegetable can be pureed, sauteed, roasted or even turned into a soup.

Glenn prefers to cook his pumpkin dishes as a stew or a casserole along with other vegetables thrown in. Another reason pumpkins make the perfect winter food is the drinks that pair best with them. Glenn balances the sweetness of his pumpkin dishes with a heady cognac or calvados. "The burnished flavour complements the taste", he says. 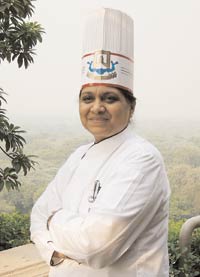 Manisha Bhasin, Executive Chef, ITC Maurya, Delhi
Manisha Bhasin has two favourite winter dishes. The first is a rich lamb stew; the other is what is called Shalgam Ghosht. The former is a simple but delicious concoction that uses potatoes, carrots and broccoli stewed with the tender lamb in a rich broth that looks and tastes like heaven. The latter is a traditional Indian dish, which Manisha contemporises with a few seasonal greens. "These are found in plenty in winter in North India so the dish becomes a wholesome meal in itself", she says. The shalgam or turnip adds just the right amount of bite to the warm flavours of the meat, making it perfect for cold evenings.

In both cases, Manisha suggests slowcooking mutton. This technique retains natural juices of the meat and prevents over-cooking. Given the richness and big flavours of these dishes, Manisha recommends pairing them with a red wine, preferably a dry Shiraz.

The flavours of this rich, creamy risotto are magically improved with even just two slices of truffles
RISOTTO WITH TRUFFLES 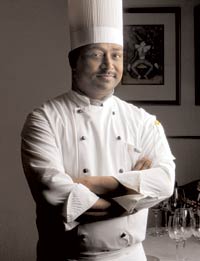 Nilesh first tasted truffles when a former colleague added them to a risotto. "I was one of the lucky chefs's to taste it," he says. Nilesh starts off his version by rubbing some elephant garlic in a warm pan. He then cooks the rice until it is al dente, a technical term that means it's just slightly resistant to a bite.

He adds few finely-chopped mushrooms for texture. Finally, there's the piece de resistance. Finely sliced truffles are added along with parmesan just before plating. Truffles will add flavour to almost anything. "Truffle scrambled egg, even truffle pate is a bingo", says Nilesh. Be careful when you pair up a truffle though. The delicate flavour needs a finely-balanced accompaniment. Nilesh suggests a Chardonnay or dry Riesling as you toast a fine meal.

A fun but forgettable feast