Disruptions such as electrification, autonomous driving and connected technologies will pave the way for luxury cars that will be more futuristic and cutting-edge than ever. 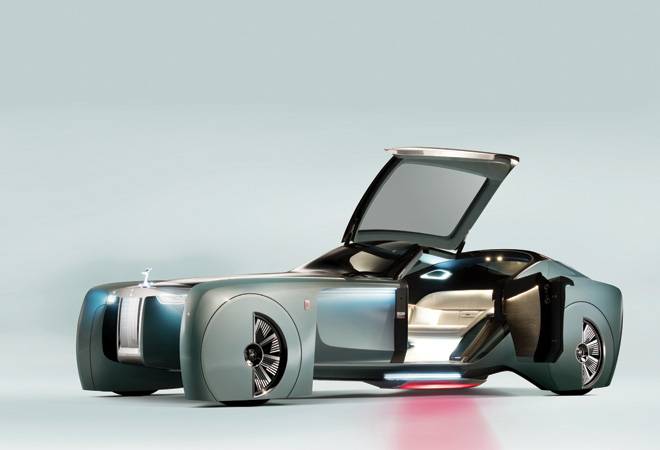 Imagine a car that offers you a comfortable flatbed to sleep, is silent as a church and unobtrusive as it doesn't need a driver. Top it off with unmatched versatility that can transform the cabin into a living room, a theatre or business centre at the press of a button replete with a change of upholstery, lighting and furniture. A highly robotised machine that can munch miles by the hour at hyper speeds without much fuss, manoeuvre twisty roads or traffic jams on its own and offers you an invisible but friendly and efficient robot that doubles up as a chauffeur and assistant much like Jarvis of the Iron Man series. All that, without hurting the environment. That in a nutshell is the future of the luxury car.

The three-pronged disruption - electrification, driverless cars and connectivity that has engulfed the global automotive industry - is having its say on the luxury side of the business as well. Within a decade from now, cars meant for billionaires would be starkly different from today. Unlike the other segments, though, the evolution is likely to be more coherent and the cars that emerge from the shadows, more exciting. Lack of any restriction on a sticker price does have its merits. Replacing the conventional internal combustion engine that has done its duty for over a century now, by a simplistic electric motor and battery pack would herald a new era of comfort and convenience. With the engine gone, the snout of the car can now be shorter, the wheels more spread out to the extreme corners of the vehicle enhancing the space inside. For the Bentleys and Rolls-Royces of the world that today house monstrous 8 to 12 cylinder engine blocks under the hood, this change would be dramatic. The cars in future would have much more space than before without any change in dimensions per se.

"Our outlook for the long term gets depicted by our research car F 015 Luxury in Motion," says Roland Folger, Managing Director and CEO, Mercedes-Benz India. In the F 015, the proportions of the occupant cell are set considerably farther forward. The front and rear overhangs are reduced to a minimum. This layout enables an extremely long wheelbase, leading to maximum interior space."

The extra space would mean more comfort and an overhaul of the seats that we are used to in cars today. Another big change would be the absence of any engine noise. A lot of research and development in luxury cars today is concentrated on how to make the cabin silent and insulated from the sounds of the outside world. The biggest challenge was the noise emanating from big engines themselves. With that gone, the luxury car of the future will be a sea of calmness.

Mass market car companies like Renault Nissan may lead the charge in electrification but the rise of Tesla has shown why it need not be a boring thing. In fact, an electric motor by design offers higher torque than a conventional engine.

A Croatian firm, Rimac Automobili, turned heads earlier this year when it showcased its offering C Two. Rimac makes some of the most powerful electric cars in the world and the C Two with its 120 KWh battery makes 1914 horsepower giving it a top speed of 412 kph and a range of 400 miles. It can also accelerate from 0-100 kmph at 1.85 seconds. To put it in context, Bugatti Chiron - the most powerful and fastest car today - does the same in 2.4 seconds.

The other big innovation would be in autonomous driving. Currently, car companies are working on a variety of driverless modes largely on partial assistance where the car can either park by itself or manage lane driving on freeways and manoeuvring gridlocked traffic in cities. The next era would be where the chauffeur would become completely redundant and the car could drive by itself on any terrain guided by a matrix of radars and cameras. Gone will be the steering wheel, pedals and in effect the driver's seat itself.

The chauffeur of the Rolls-Royce of the future demonstrated in its 103EX is a virtual assistant that is imbued with its own artificial intelligence. It would work intuitively to advise owners on itineraries, schedules, and options before leaving the residence reminding about appointments and tasks and making suggestions to ease any anticipated impediments. With no driver, the privacy on offer would make the car an extension of the home or office.

"When driving is done by the car with all amenities of autonomous technology, passengers could use the luxurious interior as their new "third place" between home and office," says Folger of Benz. "Without being attentive to the urban traffic and other commuters, the first meeting starts in the car with a coffee and full attention. In addition, the other meeting members could be on board. But besides work and travel scenarios, the luxurious series equipment will be ease and comfort. And the option to do what you like is this new quality time for yourself." "The luxury mobility of tomorrow is driverless technology. Just like in the past when features like Rear View Camera, ABS and Airbags made their debut in luxury sedans and hyper sportscars, autonomous driving would become a reality for luxury cars before it enters the mass market. While this is still a few years away, it clearly reflects the creation of a demand the customer may not be aware of now. Once full autonomous driving is available, it will reflect a basic necessity, similar to a smartphone," says Rahil Ansari, Head, Audi India The biggest impediments to the electric vehicle story are twin problems of range anxiety and charging. Like most technologies in the past that are adopted, developed and perfected in high-end cars before making their way to mass market vehicles, luxury cars are expected to pave the way here as well.

There are two big reasons for this. One, the luxury car customer has deep pockets, so manufacturers need not wait for battery prices to crash before planning. While for a humble electric car, the cost of the battery may account for as much as 60 per cent of the cost of the vehicle, for a top-of- the-line luxury car, it would be less than 30 per cent. That means these cars at the outset would have the biggest and most advanced batteries that would offer far more range. Further, turbo charging stations would also come up specifically for such cars so that the consumer is not inconvenienced at any point for lack of electricity.

"As challenges like high power batteries and charging infrastructure manifest themselves, luxury cars would take the lead here. You will find the most advanced batteries in our flagship products of the future offering significantly more range," says Ansari of Audi.

Porsche's concept Mission E is a case in point. As the template on which future Porsche cars would be built, the Mission E concept has a 95 kwh lithium ion battery that gives the four-door sportscar a range of 500 km. Porsche has also doubled the car's system voltage to 800 volt, which means its turbo chargers can charge it 80 per cent in less than 15 minutes. In other words, if you stop by at a charging station just as long as it takes to refuel at a gas station today, you would end up with a range of at least 100 km in that time.

In a nutshell, the ability to last longer on the road and charge faster by the road side itself would become a key luxury element.

Return of the quirks

The universal trend towards using common platforms to bring down the cost of manufacturing in the last two decades had taken the sting off the quirkiness that is part of a super luxury car. Before the current generation came about, the Rolls-Royce Phantom, for example, shared a lot of underpinnings with BMW 7 series. Ditto for Audi and Bentley. It also restricted the level of bespoke - customisation, which is offered. Today, mostly that is consigned to the interior design and upholstery.

With the rules of the game being reset, the quirkiness will make a comeback. Rolls-Royce, for example, is working on a concept that will allow passengers to stand up and climb down from the car, just as it used to be in the Victorian era of stage coaches. The Rolls-Royce 103X concept has a glass canopy hinged on the left of the vehicle that lifts to allow the occupant to stand whilst providing shelter from above and behind. Then, in one effortless movement, the single coach door sweeps open and a step emerges from below the running board. As a final flourish, a red light is projected, carpet-like, from the underside of the step as a welcome.

Italian hypercar maker Lamborghini is grappling with the future in its own way. It aims to reduce weight and to increase the availability of electric energy using structural electric energy storing composites as a rechargeable battery. In other words, the outer body panels of the car could be used for energy storage.

At the same time, the Terzo Millennio project aims to combine the technology to monitor the whole carbon fibre structure, both visible and invisible, with the concept of health-monitoring with the goal is to provide for the car the ability to conduct its own health-monitoring, to detect cracks and damages that might occur after accident, throughout its substructure, while limiting or reducing to zero the risks correlated to the presence and propagation of cracks in the carbon fibre structure.

Ultimately, for any new concept to find its feet, it needs iconic early adopters. The luxury electric car got one in the form of Prince Harry and his wife Meghan Markle who drove off in an electric Jaguar E type after their wedding this year. The same car, which has retro styling, will go into production soon.

Having shown the glimpse and vowed the royalty - the pre-eminent class of luxury customers, it is now for the industry to bring the future closer to the present.