Apart from offering the ultimate luxurious experiences to their guests, luxury hotels are also home to priceless works of art. The presidential suite of the iconic Taj Mahal Palace Hotel in Mumbai has hosted the likes of former US President Barack Obama, actor Angelina Jolie and the Duke and Duchess of Cambridge, William and Kate. The 5,000 sq.ft. of grandeur has the best view of the Arabian Sea. Its colonial style furniture, marble floors, exotic artifacts, private spa and private butler service are bound to leave guests with unforgettable memories of Indian hospitality. It also offers a museum art gallery experience. From M.F. Husain to R.H. Raza and Laxman Shrestha to Ram Kumar and Jatin Das, it has 25 pieces of art of these iconic Indian artists. These include Husain's acclaimed Sitar Player and his untitled painting of a single female figure, and paintings from the famous Delhi-based artist Ram Kumar's Benares series. In fact, the hotel has 4,000 pieces of art collected between the early sixties and the late eighties, some of the most prized ones being the painting made from newspapers by one of the worlds greatest abstractionists, Vasudeo S. Gaitonde, a depiction of the Bombay harbour by Jehangir Sabarwala and Lakshman Pai's Ragmala series. These were acquired by Elizabeth Kerkar, the wife of the then General Manager of The Taj Mahal Hotel, Ajit Kerkar, who was in charge of the decor of the hotel. She not just invested in art but also encouraged budding artists by giving them space in the art gallery. Painter Laxman Shreshtha, for instance, owes his career to the Taj Art Gallery from where the King of Bhutan bought one of his works in the sixties; thereafter, there was no looking back for him.

Luxury and arts have always gone hand in hand. Luxury hotels believe that beautifying their spaces with spectacular art can be the ultimate luxury experience they can offer their guests. They are also a symbol of culture and heritage of the city they are located in. One of the finest examples of an art-led luxury hotel that echoes the rich French history is the 129-year-old Ritz Paris. Despite undergoing two rounds of renovation, Ritz has kept its age-old art and artifacts intact. The hotel boasts of a Turgot Plan de Paris (the Turgot Map of Paris) at the entrance, Louis XV secretaire, fine oak wood carvings and gold fittings across the lobby, all of which have retained their age-old glory. The hotel even has its age-old upholstery and curtains intact. "Great hotels give you an experience that goes beyond F&B and comfort. They promote culture and take it forward. The Ritz in Paris is ingrained with its art," says Gaurav Bhatia, MD, Sotheby's India. 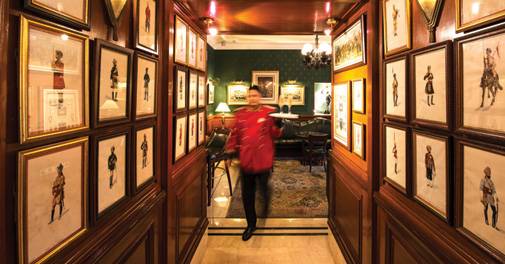 Art comes naturally to most luxury hotels in India too. While the Taj has one of the most envious collections of Indian artists which experts say is worth Rs 300-400 crore, the collections at the ITC hotels, especially ITC Maurya (in Delhi) and ITC Chola (in Chennai) are equally top-notch. While the collection at Taj is largely abstract and more contemporary, ITC's focus remains on showcasing history. ITC Maurya's exterior architecture is based on the ancient Buddhist stepped stupas and the main lobby follows the shape of a chaitya or prayer hall as seen in the Buddhist stone-hewn caves of Ajanta and Ellora. When ITC Maurya was coming up, it commissioned Delhi-based painter and national award winner Krishen Khanna to curate the art in the hotel as well as reach out to the leading artists of the time such as M.F. Husain, Tyeb Mehta, Akbar Padamsee, J. Swaminathan as well as sculptor A. Ramachandran. In sync with its theme of Indian history, the hotel has a series of paintings on glass by Husain which illustrate the Arthashastra. The most captivating, however, is the mural on the dome of ITC Maurya, painted by Krishen Khanna. Titled the 'Great Procession', it depicts Mauryan Age cameos and is known to be valued upwards of Rs 100 crore.

However, if one wants to experience India during the British Raj, The Imperial, New Delhi, is where one should go. The 82-year-old museum hotel has over 6,000 works of art from 1800s and 1900s. The lobby has ornate chairs and tables gifted by the royalty. The lobby, the restaurants and each and every floor takes one to the British era with life-size paintings of the Imperial Royal Durbar of 1911, coronation of King George V and portraits of Robert Clive, Queen Mary and Queen Victoria. The hotel, which owns the original Victoria Cross and has a collection of black and white photographs of Lord Mountbatten's high tea meetings at the hotel with India leaders such as Mahatma Gandhi and Jawaharlal Nehru, conducts a two-hour art tour for visitors. The Imperial had its first art exhibition way back in 1936 which was inaugurated by the Maharaja of Patiala. "Art defines Imperial New Delhi. It not just adds to the design of the hotel, it also adds to the value of the property," says Vijay Wanchoo, Senior Executive Vice President, Imperial New Delhi.

The focus of most of these iconic luxury hotels now is not so much on acquiring art. "The vision has moved from acquisition to preservation. Once you have 4,000 paintings, the priority is to maintain. I was brought in to do the inventorisation in 2003," says Mortimer Chatterjee, Art Curator, The Taj Mahal Palace Mumbai. While the older luxury hotels already have a lot of art, the newer ones are spending enormous sums on acquiring art. One of the recent art acquirers is Mumbai's St. Regis Hotel. The three-year-old property already has 200 pieces of art, the most spectacular of which is a hand-painted mural by G.R. Iranna, a homage to the culture of the city of Mumbai. St. Regis hotels across the world have a mural depicting the culture of the particular city, and the one in Mumbai depicts iconic personalities such as Mahatma Gandhi, Dhirubhai Ambani, Sachin Tendulkar, Amitabh Bachchan, as well as the famed Mumbai street food and the dabbawallahs. "We have put aside a fund and in the next five years we want to seriously acquire art and have a good inventory of our own," says Gayatri Ruia, Development Director of Palladium, Phoenix Mills, which owns the St. Regis in Mumbai. Bhatia of Sotheby's laments that most iconic Indian hotels, be it the Taj or the Imperial, are no longer investing in art. He says while these institutions have promoted contemporary artists, a lot still needs to be done to promote folk arts such as the Madhubani art from Bihar or the Pattachitra art from Orissa which are an important part of Indian culture and are languishing. "Hotels need to continue to develop as cultural institutions. They need to have budgets allocated to art, to preserve as well as invest in new art, especially folk art, which is being sold so cheap."

Though the St. Regis Mumbai has a collection of Rajasthani Tikri art and block printing on a few of its floors, Ruia says that sourcing heritage or folk art is challenging as there is no provenance. The St. Regis recently acquired painter Shakti Burman's depiction of Hanuman invading Lanka to rescue Sita which, according to art lovers, would be anywhere in the region of `5-7 crore. At a time when the economy is constantly going through ups and downs, does it make economic sense to invest crores on art? Ruia says art will be her hotel's biggest differentiator in the long run. "As an investment opportunity, there are four or five things that you would invest in before you would invest in art. If you are passionate about art and you are able to understand that you have made a reasonably good investment which will hold you in good stead over the next 10 years, you will probably invest in art."