Owning a citizenship is a sought after luxury among the world's rich, and countries are not letting the opportunity pass.
Joe C Mathew   New Delhi     Print Edition: October 21, 2018 How many have you got? No, not private jets, yatchs, jewellery or houses. We're talking about passports, the new stamp of luxury. For the 21st century jetsetters, the world is a playground and not for them the restrictions of visas to move from one country to another. Many countries, too, are eager to attract such wealthy globe trotters and billionaires, and of course, their money. 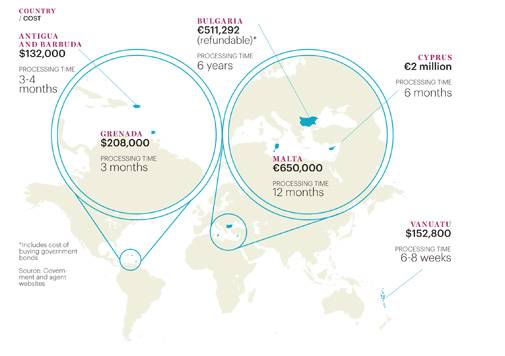 The main advantage of having certain passports is that not only do they indicate citizenship, but also offer easy access to various other countries. For instance, with an Indian passport, one can go to 78 countries without a visa. But with a passport from, say, the US, Canada or the UK, you can go to 180 plus countries visa-free. If you have one from Malta in Europe, you get instant access to Schengen countries. No wonder passports are the new must-have for the global rich.

While various countries offer citizenship investment programmes, the details vary. Among the cheapest are some Caribbean countries such as St Kitts and Nevis, Vanuatu, Antigua and Barbuda, and Grenada. And among the most expensive are New Zealand, Cyprus, and Malta. Speed varies too, often depending on how much one invests. So while some countries offer citizenship within just a couple of weeks, others take longer. But for applicants with the right credentials, and deep pockets, a passport of choice is a certainty.

Malta, the smallest member state in the EU, has a popular investment based citizenship programme. To be eligible, applicants must contribute 650,000 euro to a government fund; lease property in Malta for a minimum of 16,000 euro per annum, or purchase property for at least 350,000 euro; and acquire government bonds or bonds or securities listed on the Malta Stock Exchange worth 150,000 euro. The property and the bonds or securities have a lock-in of five years. The entire process of getting citizenship takes around 12 months.

"EU member countries like Cyprus, Malta, Greece and Portugal all have investment programmes where the investment requirement is 100,000 euro to 10 million euro. In some cases, you get residency followed by passport, and in some cases, a passport," says Ajay Sharma, founder, Abhinav Outsourcings, an immigration visa consultancy in New Delhi.

Another picturesque island nation to offer investment-linked citizenship is Vanuatu, in the South Pacific. The main applicant can get citizenship in six to eight weeks, for $152,800, without living or visiting Vanuatu. The passport allows visa-free entry to over 125 countries including those in the EU, and the UK.

The pioneer in investment linked citizenship programmes, however, is the US. The EB-5 programme has been in effect since 1992. An EB-5 investor has to invest a minimum of $1 million in a new commercial enterprise that will create at least 10 full-time jobs for US citizens. The validity of the programme, however, ends by September 30, 2018, though it may be extended.

Another popular programme among Indians is the investment immigration programme of Quebec in Canada. The applicant must have legally obtained minimum net worth of CAD$1.6 million and make a government guaranteed investment worth CAD$800,000 in Quebec, which will be refunded without interest after five years. The candidate's residency will initially be for Quebec, until the grant of Canadian citizenship.

Such investment linked programmes work well for passport seekers as well as the supplying countries as these investments can be significant. For example, the Global Wealth Migration Review of the Mauritius-based AfrAsia Bank states that growth rates in Malta, Mauritius, Israel, the US, Luxembourg, Switzerland, New Zealand and Australia have been assisted by the ongoing migration of wealthy people. "Global wealth migration is accelerating. Approximately 95,000 millionaires (HNWIs) migrated in 2017, compared to 82,000 in 2016. With 7,000 outflows in 2017, India registered the second biggest HNWI outflow (after China's 10,000) in 2017," the report states.

Pankaj Joshi, Founder, Nysa Global, a professional services firm that works with families that want to move abroad, says the reasons include business expansion, and a desire for a better quality of life. "We work in countries where people actually want to move to. We have clients from smaller cities and more people are from North and West India," he says.

Wealth migration, however, need not entail migrating to that country. Antigua and Barbuda is an example. According to the Citizenship by Investment Unit of the exotic Caribbean island nation, there were seven Indian citizens among the 187 applications they received during the January-June 2017 period. To secure a passport, one has to donate $200,000 to Antigua and Barbuda's National Development Fund (NDF). The passport will be renewed after five years, provided the recipient has spent a total of five days in Antigua and Barbuda since gaining citizenship, within the five-year period. The passport holder can travel visa-free to 150 countries, including Hong Kong, Singapore, the UK and the Schengen countries. The government has recently announced a 50 per cent discount on the non-refundable NDF donation, a clear indication that competition is on the rise among nations to attract the investment of wealthy global citizens.