Obeetee, a 100-year-old company, is reinventing the design language used in carpets 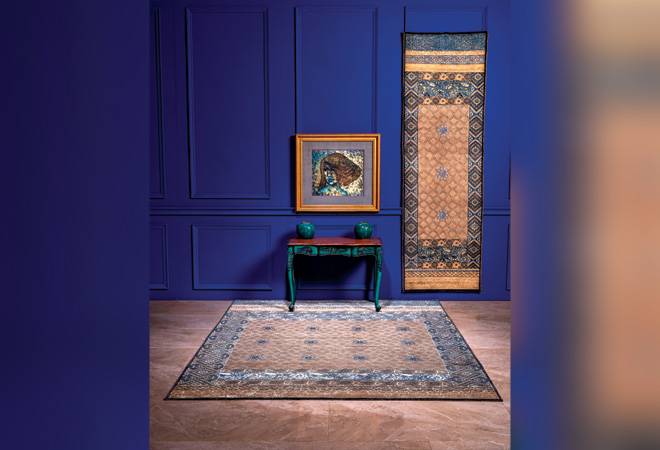 Mehtab Bagh, from the Obeetee-Tarun Tahiliani 'Proud To be Indian' carpet collection, has been made using midnight blue and dusky beige material

The village of Dehariya in Uttar Pradesh's Bhadohi district is a quiet place with houses nestled in a sea of lush green fields and trees. Apart from chirping birds, only a two-storied building makes noise. Weavers on the ground floor prepare looms. In a room above, artisans sitting on benches in a row hand-knot warp, or yarn that is held horizontally, to weft - yarn is inserted over-and-under the warp. Each artisan can create up to 9,000 knots a day. Slowly but surely, they give shape to colourful silk and woollen carpets. In a few months, the carpets would be shipped abroad to NRI homes, to luxury hotels in Delhi and Mumbai, and to CEO cabins in large companies.

In one corner, three weavers knot indigo yarns. They are readying a carpet commissioned by the Arvind-Indigo Museum in Ahmedabad. The brainchild of Sanjay Lalbhai, Chairperson and Managing Director of Arvind Ltd, the museum is exclusively dedicated to the colour indigo. This carpet has 65 per cent silk and the rest is wool. There are 150 knots per square inch and when ready, knots would total 97,200. It would be 6x9 feet in size and cost over Rs 4 lakh. The carpet, after it is woven, would also be embroidered.

The order for the carpet has been placed with Obeetee, a 100-year-old carpet making company. Five years ago, Obeetee started collaborations with top Indian design houses to bring about an Indian twist to carpets, thus far dominated by Persian and central-Asian design philosophy. This particular carpet is designed by fashion designer Tarun Tahiliani and is inspired from the miniature art of Rajasthan.

How Carpets Are Woven The collaborations, under the Proud To Be Indian collection, mark a new chapter in the long history of Obeetee. The company was formed just after World War I, in 1920, by three Britishers. F.H. Oakley, F.H. Bowden, and J.A.L. Taylor brought together many artisans around Mirzapur, about an hour's drive from Varanasi, to start Obeetee, the name reflecting the initials of the founders.

Obeetee changed hands many times. Bowden and Taylor gave up their stake in the company. Oakley's nephew took over and then his son, Edward Oakley. In 1998, Kolkata's Luxmi Group took a controlling stake in the company. "Edward Oakley was looking for a partner because he didn't have any family in India. He met my father. We are in the business of tea so we knew many of the old British businesses in India," says Rudra Chatterjee, the current Chairman of Obeetee and Managing Director of the Luxmi Group. "Edward impressed us with his professionalism, integrity, ability to plan ahead and create infrastructure. Although we were a majority shareholder, he continued running the business." Edward Oakley passed away in July 2019.

"Our customer base included important government offices (including the Rashtrapati Bhavan). Then, there were the embassies in India, and hotels such as The Oberoi Group. The business with Oberoi Group dates back a long time," says Chatterjee. However, most of Obeetee's carpets, are exported.

Carpets are priced on a per square foot basis. The larger the carpet, the higher the cost. The price also varies based on the knot quality and the amount of silk. Obeetee's carpets that are 100 per cent silk and have 300 knots per square inch are priced at Rs 11,500 a square foot. 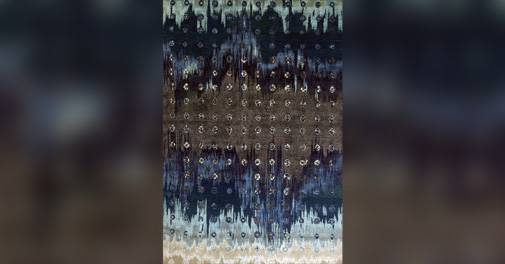 Rangrez in indigo is from Obeetee’s collaboration with designers Abraham & Thakore, and is inspired by the bandhani and ikat designs

Design traditions, which were mostly from either Persia, Nepal or China, are seeing modern renditions that showcase India. "Chinese carpets have an oriental motif. There are dragons and flowers. (Designs) from Indo-Nepal and Tibet are more influenced by tanka paintings and more Buddhist impressions. They are more subtle and have geometrical shapes. Not as intricate as a Persian design," explains Jasmine Roy, the Assistant Vice President of Design and Marketing at Obeetee.

"Persian carpets, on the other hand, have intricate patters and imagery. They often have a medallion at the centre. Anything is considered aesthetically appealing when you have created maximum symmetry. Persian rugs follow that," she adds. Persian rugs also tell a story. The narrative is direct. You could tell a war scene from a forest scene and from a display of flowers.

The carpets in the Proud To Be Indian series, however, are different. While they take inspirations from India, the interpretation can be subtle, even abstract. "The use of colours were limited in Persian rugs. In our Indian collection, the designers have played with unusual colour combinations. We have never seen pink, fuchsia or jade happening before. Those colours have been tried out," Roy says.

So what are these top designers designing?

At Obeetee's factory, near Mirzapur, a showroom houses some of its prized collections, from carpets with an antique look to vibrant ones, from carpets that tell a story of war to those that are inspired by architecture to sarees. The first designer Obeetee collaborated with for the series was Tarun Tahiliani. He shifted the focus of carpet design by designing detailed borders inspired by miniature paintings. "The central part of the carpet, in Persian design, is the central medallion. That is the focus. In the Tahiliani collection, the focus is on the border. It is detailed and has embroidery. This also works when it comes to the usage of the rug. Very often, people have fancy centre tables, which would hide the central medallion in the Persian-style design," Roy says.

A collaboration with design house Abraham & Thakore brought textile design sensibilities to carpet design. In a coffee table book on their collection, the designers write that they wanted to propose an alternative design vocabulary versus the strong Persian and central Asian design language. "We looked at the bandhani textiles of Western India, the ikats of Pochampally, the block-print traditions of both Rajasthan and Farrukhadab as well as the diverse saree weaving patterns from Kanjeevaram for inspiration."

The designers also have a calligraphy collection that is inspired from old postcards. The script here is in Latin, but it is an abstraction. At Rs 8,100 a square feet, this is one of the more expensive of the Proud To be Indian carpets. It has 78 per cent silk and 200 knots per square inch.

Abraham & Thakore mentions that the design house was looking at creating surface effects that were muted and washed out, to evoke a sense of nostalgia. This was achieved through complex finishing techniques. At the end of the weaving process, carpets are finished with a washing, in water and chemicals. How it is washed can make or mar a carpet. Done well, it gives the carpet a certain sheen or the desired antique effect.

Obeetee says a collection from designers Raghavendra Rathore and brothers Shantanu and Nikhil Mehra is in the works and is slated for release next year. Rathore's design has a royal theme with the usage of colours such as indigo, dark charcoal, magenta, maroon and burgundy. Shantanu & Nikhil is working around the theme of pre-Independence mutiny.

So are hand-knotted carpets a good investment? Chatterjee says a good carpet can be enjoyed for a lifetime, and beyond. "By the time our children grow up, the craft of hand-made carpets will become rare. And every year, it is going to get more expensive to weave a carpet," he says. "Carpets do appreciate in value over time - there is no question about it," he adds.