The recent run-up in stock prices notwithstanding, a host of Indian promoters has little choice but to either sell assets or equity to survive the downturn.

Throw that nugget of Oriental wisdom at the promoters of India Inc., and they might just be quick to retort: “We bought what we need, and now we’re selling what we don’t.” Yet, if Corporate India was being patted on its back for its acquisitive itch a few years ago, these days Indian companies are hogging the limelight for the selling spree they have embarked upon—of assets and shareholding. Right from India’s biggest conglomerates like the Tatas and the Birlas, to mid-sized sector leaders like pharmaceutical major Wockhardt and real estate major Unitech, to new-generation promoters like Tulsi Tanti of Suzlon Energy, India Inc. is preparing for its own end-of-season garage sale.

On offer are bits and pieces of core operations, non-core businesses lock stock and barrel (anybody for electric insulators or animal feeds?), and good old shares—either in flagship companies or those that are lying around as financial investments. As far as sale seasons go, it can’t get any bigger than this—the Tatas selling equity in its crown jewel TCS (in which Tata Sons owns a 74 per cent stake); the A.V. Birla Group looking for buyers for its electrical insulators operations and a partner for its retail business.

K.P. Singh’s DLF rustling up a little under Rs 4,000 crore by selling 10 per cent of the promoters holding in the flagship realty company, and looking to raise Rs 5,500 crore more by hawking non-real estate assets like windmills; Wockhardt putting its animal feeds unit on the block and scouting around for a buyer for a minority stake in Wockhdart Hospitals…It’s a long list (see Who’s Selling What) and it’s an endof-season sale alright, with many of the assets being offered at a substantial discount to their peak values.

The trigger for such hectic activity can be summed up with one four-letter word: Debt. Debt that was used—or overused—to make acquisitions big and small, to expand operations, and to flag off new ventures.

Highly-leveraged buyouts—40 per cent of the $6 billion Hindalco paid for Novelis was in debt—at peak valuations appear totally out of whack today; to make matters worse, demand for these products has softened, making a mockery of the cash flow projections made at the time of acquisition.

As Frank Hancock, Managing Director-Advisory, Barclays Capital, points out, promoters didn’t anticipate that credit would dry up so fast and so quickly. “Typically, as companies do big-ticket acquisitions, an industry scenario analysis is done which factors in the upside and the downside risk. But nobody anticipated this kind of a meltdown. Now they are faced with a double whammy of restructuring the loan and a slowdown in their industry.”

Hancock had advised a few large corporates on acquisitions in his previous stint at ABN Amro. Still, yesterday’s buyers turning sellers today is just one factor that explains the divestment burst. The others include the rush for foreign currency convertible bonds (FCCBs) and also promoters who borrowed money by pledging their shareholding, only to lose it when they couldn’t pay up. A recent Ernst & Young survey of finance executives and CFOs across 14 industries suggests that the sale season will be a prolonged one.

Nearly 63 per cent of the respondents say they expect consolidation in their industry. The survey points out that there is intense pressure on executives to create the right divestment strategies and lists “prepare your team to divest non-core assets” as one of the “ten M&A imperatives to focus on during the downturn”. 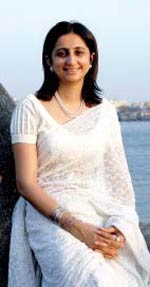 Manisha Girotra, CEO, UBS India
That pressure to divest will culminate in an increased sell-side deal flow for investment bankers. Last fortnight’s rally on the stock markets, however, may result in many corporate houses reconsidering the need to divest. Manisha Girotra, CEO, UBS India, points out that if the market rally sustains for a period of time, large corporates will not need to divest non-core assets. For instance, Aditya Birla Insulators, which was one of the best performing business units for the AV Birla Group till some time ago, was put on block in January this year; it hasn’t yet found suitable buyers even though two private equity funds did evince interest. Chairman Kumar Mangalam Birla may just be tempted to call off the proposed sale, feel bankers, as funding options open up. “What looked like a drought until the election results were out will turn out to be an early monsoon,” quips Ravi Sardana, Senior Vice President, ICICI Securities, indicating that more equity issuances, qualified institutional placements and initial public offerings could now take place. He adds that companies that were looking at raising debt to buy back FCCBs or to meet other requirements may now turn to the equity route. The euphoria has got built in so fast that according to one estimate nearly Rs 7,000 crore of fund-raising is being lined up by corporates.

But crucially, as Girotra explains, mid-sized companies could still be under pressure to sell. “The segment that may not still get easy access to funds is midsized companies and that’s why consolidation or mergers are bound to happen in this segment,” she adds. Agrees Hancock of Barclays Capital: “The mid-sized and smaller companies don’t have the bandwidth and a portfolio of non-core assets that they can divest to raise funds. And, secondly, banks have more comfort with large corporates and are accommodating in their loan terms and agreements.”

Another investment banker at a foreign investment firm believes that many mid-sized companies in financial stress today could have sold stakes or assets last year, when the going was good on Dalal Street.

“It’s the promoters’ affinity to hold on to their shares or assets that has gone against them. Now when the street knows about their financial stress, it’s difficult to get any acquirer interested in the company,” adds the banker.

Consider one mid-sized company that’s in a debt trap. Aban Offshore, the country’s largest offshore oilfield service provider, which acquired Norway-based Sinvest in 2007, is now saddled with debt of $3.3 billion. In the March-ended quarter, the company had to write off Rs 151 crore on capital expenditure incurred on a jack-up rig which was returned from the lessee. The onetime write-off wiped out its profits for the entire quarter. Most analysts have given a sell call on the stock as they are unsure about the company’s ability to service the debt on its books. E-mails sent to C.P. Gopalkrishnan, Deputy Managing Director of Aban Offshore, didn’t elicit any response.

Then, in textiles, Spentex Industries is another company whose acquisition strategy has gone awry. When the going was good, the company expanded rapidly by buying cotton yarn and other textiles firms in foreign countries and managed to have a presence in Uzbekistan, Czech Republic, Germany and Turkey. In the quarter ended December 2008, Spentex approached its bankers for a reduction in interest rates and a revision of terms for loans and rescheduling of debt repayments. Its subsidiary in Czech Republic has filed for re-organisation of its business activities. Frank Hancock, Managing Director-Advisory, Barclays Capital
Analysts don’t rule out Spentex having to sell pieces of previous acquisitions. Another variation of the sell spree is promoters losing their stake simply because they have no choice. That’s because such promoters have borrowed money by pledging their shares with the lenders and aren’t in a position to repay these loans. Result? They lose their shares, and control of their companies. Case in point: Great Offshore, where the promoter Vijay Sheth had to relinquish a 14.89 per cent stake to Bharati Shipyard, its key vendor, after he failed to repay Rs 200 crore he had borrowed from banks including ILFS and Motilal Oswal Financial Services. “The acquisition was done to ensure that we don’t lose business if the company gets sold to a competitor or foreigners,” says P.C. Kapoor, Managing Director, Bharati Shipyard. Whatever the rationale, Kapoor acknowledges the transaction as an acquisition; such buyouts could prove an opportunity for predators on the prowl for assets on the cheap.

Kishore Srinivasan, Executive Director, Structured Finance at Avendus Capital, warns that there are many more promoters who could end up losing control if they fail to repay loans taken by pledging shares.

For consolidation to take place, not just sellers but buyers too are needed. And that’s the silver lining of the sale spree: There’s no time like now for a bit of strategic M&A, when valuations are still a fair distance from their all-time highs. Those who buy now won’t have to fear about overpaying—and having to later on sell something they may or may not need to pay up for the acquisition.