Back in 2008, owning an Android smartphones was a farfetched dream, the reason being the operating system was relatively new and only the leading handset makers were releasing phones on the platform. The handful of smartphones, therefore, had hefty price tags. Things have changed down the years. Along with the big names, Indian handset companies are now looking beyond the dual-SIM devices and eyeing the Android market. As a result, we now have many Android smartphones priced under Rs 10,000. While the prices are enticing, you shouldn't, however, expect the best of hardware when you acquire these phones. Do consider the display size, processor speed and the RAM- specs that will boost the overall performance of the handsets. Here are a few that we think are worth their price. 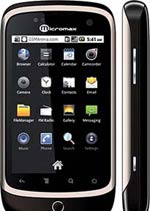 MICROMAX A70
Price: Rs 6,200
Specs: Android v2.2; 3.2 inch capacitive display; 160 MB memory, 256 MB RAM; 5 MP camera; 85 gm.
The company is not just coming up with dual SIM phones but is aggressively trying its luck in the Android space as well. One of its three offerings on this platform, the A70 comes with a 3.2-inch capacitive touch display. The decent metallic look is accompanied by the traditional Android design comprising four keys-back, home, search, options-and the Micromax branding at the top. On the internal hardware front, it packs in a 600 MHz processor, 256MB RAM and runs on Froyo, Android v2.2. In performance, this phone is neither super fast nor can it be called sluggish. Accept the fact that this handset cannot stand comparison with the likes of Samsung's Galaxy S series. Also, the onscreen keypad isn't the best and one might take some time getting used to it. Basic connectivity options such as Wi-Fi, Bluetooth, 3G are onboard along with a 5 MP camera, music player, video player and FM radio. The 1450 mAh battery manages to do the required tasks for around a day and a half.

MOTOROLA FIRE
Price: 9,999
Specs: Android v2.3; 2.8 inch capacitive display, QWERTY keypad; 256 MB RAM, memory expandable to 32 GB; 3.15 MP camera;110 gm.
The Motorola Fire has a 2.8-inch capacitive display on which you can navigate with your fingers, as well as a physical QWERTY keypad on which you can type. It may have a regular 600 MHz processor and 256 MB RAM, but it scores over some of the other Androids since it sports the latest version of the operating system, Android v2.3. Capable of handing emails, web browsing, applications and multimedia with ease, it comes with a 3.15 MP camera and ability to record 480P videos at 24 frames per second. Predictive text input, document viewer, digital compass, etc, are other usual options. This phone packs in a 1420 mAh battery.

SONY ERICSSON W8
Price: Rs 9,999
Specs: Android v2.1; 3-inch capacitive display; 128 MB storage, expandable to 16 GB; 3.15 MP camera;104 gm.
Although Sony Ericsson is pushing it as a music phone by labelling it a Walkman device, the W8 is still an Android smartphone. Compact and good looking, it has a scratch-resistant display. Sadly, it runs on outdated Android v2.1 and is powered by a 600 MHz processor and has a168 MB RAM. Although on the spec sheet it scores less than the Micromax and Lava phones, the W8 is better in term of hardware and user interface. The 3.15 MP camera captures decent images and the music player is loud and clear. The phone handles emails, browsing, application download with ease.

KARBONN A1
Price: Rs 6,999
Specs: Android v2.2; 2.8-inch resistive display; 210 MB memory, expandable to 32 GB; 3.2 MP camera;105 gm; 1100 mAh battery.
Being a budget phone, Karbonn's Android smartphone, the A1, has a plasticky look and feel; its 2.8-inch resistive display doesn't respond fluidly to the touch of the finger. Unlike other Android phones, this one has a physical D-pad with navigation keys and a call answer and call reject key. Hiding under the hood is a 600 MHz processor, 162 MB RAM and the Android Froyo operating system. An Advance Task Manager for killing the apps running in the background, Aldiko (an eBook Reader), AccuWeather, Documents to Go Viewer, Swype keyboard input and a call black list app are preloaded on the phone.

MTS LIVEWIRE
Price: Rs 4,999
Specs: Android v2.2, 2.8 inch resistive display; 3MP camera; 600MHz processor; 256 MB RAM; 1000 mAh battery
There were talks about sub-$100 Android smartphone but none was priced below ` 5,000. The MTS Live Wire is the most affordable Android smartphone but only for CDMA users. With a 2.8 inch resistive display, a stylus has been placed at the back for operating the device. With the ability to provide easy access to Google Services and Android Market for downloading apps, it runs on Android v2.2. For prepaid users, the phone is price at ` 4,999, however, postpaid users can get it for ` 2,999 by paying the balance in form of the monthly rental and accessing limited calls, data and messages for free.

MTS MTAG 3.1
Price: Rs 5,499
Specs: Android v2.2, 8.0 inch capacitive display; 256 MB ; 3.0 MP camera; 1000 mAh battery .
Of all the smartphones mentioned on these pages, only the ones offered by MTS are meant for CDMA users. Priced relatively higher than its LiveWire, the MTAG3.1 one has a 2.8-inch capacitive display and the matt finish makes it look elegant. This phone runs on Android v2.2 with a 600 MHz processor, but in addition, it comes with apps such as Task Manager and call recording. The 3 MP camera along with VGA quality video recording are the other highlights of this affordable Android.

LG OPTIMUS NET
Price: 9,999
Specs: Android v2.3; 3.2 inch capacitive display; 150 MB storage, 512 MB RAM, expandable to 32GB; 3.15 MP camera; 1500 mAh battery.
After the success of the Optimus One, LG has come up with two new Androids phones, of which the Optimus Net is the better one. Even though the high-end Optimus devices ran on the old Android v2.2, the Net proudly runs on Gingerbread. Moving ahead from a 600 MHz processor, this one has a 800 MHz processor and 512 MB RAM. These make this phone significantly better than the ones available in the market in this price bracket. Also, the device looks stylish with its curved edges, this designing extending to below the display near the physical keys as well. Multimedia features include a 3.15 MP camera, FM radio, YouTube, and GoogleTalk.

LAVA S12
Price: Rs 9,999
Specs: Android v2.2; 3.2-inch capacitive display; 120 MB memory exandable to 32 GB; 5 MP camera;120 gm.
The Lava S12 is a good-looking Android smartphone with a curved, textured design at the back. Despite the plastic, it has a sturdy build quality and weighs 120 gm. It has a 3.2-inch capacitive touch display. On the specs sheet, it boasts similar dimensions as the Micromax A 70-600 MHz processor, 120 MB onboard storage, 3G, Wi-Fi, and Android v2.2. Even with the custom 3D menu on board, the phone isn't slow and manages to perform everything smoothly. The 5 MP camera fared better than average and the music output is impressive. This device comes with one year free subscription to Zenga Mobile TV and a 2GB memory card in the sales box and has a 1300 mAh battery.