Phones for a Budget

Visit a phone dealership and you will probably walk out disappointed that the smartphone you coveted is beyond your means. Yes, the Samsungs and the HTCs would floor you with their price tags. But then you can always look at the domestic handset makers, who today bring you feature-rich phones at aam-aadmi prices. Interesting devices from the likes of Micromax, Lava, Karbonn, Zen, etc., abound in the market.

And while once you would have sneered at these as tacky wannabes, it wouldn't be a bad idea to get these affordable phones. In an age when you change phones every two years or so, these home-grown products perform well enough during their life expectancy. Listed below are a few phones that have something special to offer. If one is good with music, the other is gaming expert. If one comes with a good QWERTY keypad, the other is a full touch. Read below and choose the one that best meets your mobile needs.

MOVIE/TV PHONE
A cell phone often substitutes for an FM radio and a music player. Now you can use it for a video experience too. Here are innovative offers form G'Five and Zen.

G'Five E680
Price: Rs 2,600
How's this for a phone loaded with 20 blockbuster movies? The movies are compressed and stored in the memory card and comes with a software that compresses the size of the movie while transferring. A dedicated movie button gives instant access to this feature.

Zen Z82
Price: Rs 4,000
Launched last year, the Zen Z82 was one of the first handsets to support Analog TV. It broadcasts DD National and DD News free of cost (without active data connection). It is pretty nifty when you are close to a window or outside. It also has a good QWERTY keypad and other features such as music player and Bluetooth. Specs: 2.4-inch display, 2MP camera; 4GB expandable memory; GPRS, Bluetooth; 1100 mAh battery.

DUAL SIM
Most of the domestic handsets are capable of supporting two SIM cards. So you need one like that, you can easily get yourself a good-looking, cheap phone. 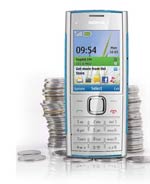 CAMERA PHONE
These days it is difficult to spot a phone that doesn't have a camera. But why be content with a VGA camera or 2 MP one when you can acquire a 3.2 or a 5 MP shooter?

Nokia X2
Price: Rs 4,710
This is a complete package from Nokia that scores on every front: looks, sound and camera. Along with a 5 MP sensor, it has an LED flash for photogarphy at night or in dim light. You can also capture moving images at 20 frames per second. The plus point: the X2 can be used for sharing images and videos with friends on your social network.

MUSIC PHONE
While most phones come with some music capabilities, there are some that are especially built for the audiophile and often come with a headset.

Lava M30
Price: Rs 4,499
Although the M30 doesn't come with an over-the-ear headphone, the attractive feature of this phone is its SRS Wow HD technology

and Yamaha PA speakers. It also has a sharing hub accessory that allows two earphones with 3.5mm jack to be connected to the phone simultaneously. Specs: 2.2-inch display; 2 MP camera; Memory expandable up to 8GB; GPRS, Bluetooth; 1200 mAh battery.

TOUCH
There was a time when touch phones with capacitive displays used to be the envy of the cash-strapped. Today there are a select few that are easy on the wallet.

Karbonn K1616
Price: Rs 4,800
Trying to replicate the looks of the Apple iPhone is Karbonn's K1616. It boasts a 3.5-inch capacitive touch display (though it isn't anywhere close to the iPhone). On the other hand, it has 3D graphics widgets, a 3.2 MP camera and 3D menu style interface. To

round it off, it is also a dual SIM phone on standby. Specs: 3.5-inch capacitive display; 3.2 MP camera; expandable up to 8GB; GPRS, Bluetooth; 1150 mAh battery.

Zen Mobile Flikk M45
Price: Rs 5,000
Zen Mobile has a good reputation regarding the hardware of its phones. The latest touch phone from its stable is based on capacitive technology, so out goes the stylus. Once can even pinch and zoom on this, like in high-end phones. To capitalise on its full touch display, this phone comes with a back stand and so can be placed on a table for watching movies and videos. The 4GB memory card bundled with the phone comes with 3 Bollywood films-Dabangg, Deewar and 3 Idiots-along with wallpapers and ringtones. Specs: 7.1-cm touch display; 3.2 MP camera; 4GB expandable memory card; GPRS, Bluetooth.

QWERTY
Rather than tap-tapping away on an alpha-numeric keypad, isn't it far easier to type a note or message on a QWERTY pad? 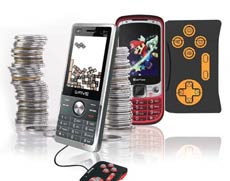 Airfone Game YoPrice: Rs 2,500
G'Five is not the only company offering a gaming phone with a console. Airfone has joined the bandwagon by adding a game pad to its Game Yo phone. Here, the handset is fitted in a controller attachment and games can be downloaded and played on the microSD card. It come preloaded with 1,650 games. Specs: 2.4-inch display; 4GB microSD card; GPRS, Bluetooth; 1300 mAh battery.

3G
Considering the erratic service and the high cost of 3G services in India at the moment, many will not be convinced to move to the 3G network. However, there is no harm buying a phone that is 3G enabled just in case things imporve.

Nokia C2-01Price: Rs 4,279
This is an affordable 3G-enabled phone from Nokia. The C2 comes with a 2-inch colour display and can be used for staying Sony Ericsson CedarPrice: Rs 4,890
Sony Ericsson doesn't have many phones price under Rs 5,000 but this one is a good looking 3G-enabled device. The 2.2-inch display is comfortable to use while browsing the Web or accessing apps, including YouTube, Twitter, MySpace and Facebook apps. Specs: 2.2-inch display; 2 MP camera; 280 MB internal, 16GB expandable; 3G, Bluetooth; 1000 mAh battery.