Popular online shopping portal Flipkart has launched an Android application. Easy to use, the main display of the application contains various categories listed on the website. For instance, we were able to browse through books, mobile and accessories, computers, cameras, games and consoles, movie and TV shows, music, home appliances, etc and even search for particular items. One can even buy stuff using the app. Our experience was spoilt a bit by the extra large 4.3 inch display, but the app should work fine on a displays less than 4 inches. (Tested on Motorola Razr) 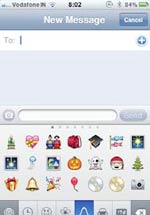 Is your iPhone looks boring without funky emoticons? Install the Emoji Free developed by Awesomest Inc, that introduces close to 460 creative emoticons in text messages, notes and even emails. Installing the app directs one to go to settings and add Emoji to the keyboard in general settings. Once done, by using the Globe icon in the keyboard, one can instantly switch between the selected keyboards. The Emoji keyboard has various rows of icons to choose from. These include people, animals, places, food, silliness, etc. Fun to use, the only problem is that these will be visible only on an Apple device and not other platforms. (Tested on iPhone 3G S) The widespread network on the Delhi Metro acts as a lifeline for the people our capital city. But it isn't as easy as you think. With numerous lines and different routes crisscrossing each other, a new commuter is likely to get confused. The Delhi Metro Navigator can be a handy app that shows offline map routes while highlighting the yellow, blue and red lines. Travel fares can also be easily calculated by selecting the starting and end points. There is also a feature to check the parking rates, but this didn't work well for us. (Tested on Motorola Razr) 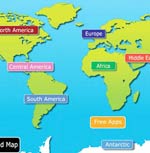 Having an Atlas handy can be really helpful, especially if you have children at home. The Atlas 2012 is an easy way to carry the world in your pocket on your iPhone or the iPod. The free version shows the world map in the landscape mode and allows one to zoom in and have a look at major cities in any country. Being a free app, ads keep on running at the top when you use it. But they don't spoil the experience much. The good thing is that this Atlas doesn't even need an Internet connection and can be accessed in an offline mode as well.(Tested on iPhone 3GS)

Developed to enhance Blackberry Messenger, this application introduces a range of smileys to be used in the chat. Launching the app takes the user through a demo that reveals the location of the new symbols and smileys, which are not accessible with traditional keys. Instead, these can be accessed through the options in chat. (Tested on BlackBerry Bold 9900)