Hoping to make a wave

The Wave 3, with the Bada OS, is a typical Samsung device: it boasts a 4-inch bright capacitive touch display with just a single physical key below the screen. However, it took us a few minutes to understand how to access the SIM slot by removing the back panel. Crafted of metal, the back panel is in the form of a casing that doesn't come out completely but opens upwards, allowing access to the battery, SIM card and memory card slot. Unlocking the homescreen makes it look similar to Android smartphones. Long pressing the icon in the main menu allows users to drag them in any of the homescreen windows.

A notification bar can be dragged from the top-it shows settings such as Wi-Fi, Bluetooth, Sound and Vibration and auto rotation and also notifies pending calls and messages. Emails, social hubs, Chat on, Google, Voice Cmd, Caster, desk clock, Orkut, are a few apps that are preinstalled on this phone and more can be downloaded from the Samsung App Store. But even now, Bada doesn't have a wide range of apps. The Polaris Office lets one open documents and edit them as well. It has a music player and video player on board, but the sound is just about average. The 5 MP camera captured decent images. On a positive note, Samsung has added a 1.4 GHz processor that makes it operate quickly.

BAG IT OR JUNK IT? The new Omnia W may be a better device.

There used to be a time when Nokia spelt trust. Not anymore. While we wait for Nokia's first Windows Phone device, we have in hand one that runs on the new Symbian Belle. The new OS still can't compete with the iOS and Android. However, Nokia lovers who have never experienced any other OS will love this device. Like the C-7, the 701 too has a metal body with curved edges and a 3.5-inch capacitive display. The interface has undergone a change as it now allows us to add different sized icons to the homescreen. And all the applications are placed in the main menu, instead of in an application folder.

Unlike older Nokia phones, this one has a 1 GHz processor that speeds up the time the device needs to handle demands like multitasking, browsing, email, downloading apps, etc. But the onscreen keyboard in portrait mode feels cramped and we struggled a lot while trying to use it for messages and email. With most other phones increasing the megapixel count, the Nokia 701 too has an 8 MP camera. But in default mode, images are captured at 6 MP resolution. This phone is NFC-enabled and allows users to exchange data between two NFC-enabled devices.

BAG IT OR JUNK IT? It's this vs a Windows Phone device. We leans towards the latter. 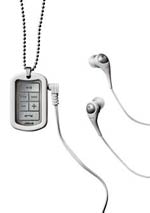 Jabra has infused style into its latest products. The Street 2 is a small rectangular device with black edging, having a 3.5mm jack and silver base containing play, backward, forward, volume up/down and call control. A silver metallic lanyard is attached at the top. It isn't heavy but we were not very comfortable with it hanging around the neck like a millstone. The earphone is connected to the 3.5mm jack and can be used for both music and calls. Holding the call key activates the headset and pairs instantly over an iPhone as well. While making calls, it support voice controls-give a voice command like 'Call Didi' and it connects the call through. The sound clarity is clear at both ends and the headset is soft on the ears. While the play key brings the music to life, the next row of keys assist in changing the tracks. Good looking, it stays active for close to six hours on both music and calls. It is also water proof.

BAG IT OR JUNK IT? Unique looking Bluetooth headset. All youngsters will love it.

The name Omnia from Samsung's stable sound familiar? Yes, a couple of years ago, it belonged to the Korean company's Windows Mobile devices. With the launch of Windows Phone Mango, Samsung is back with the Omnia W. The Omnia W is the only competition to the HTC Radar at the moment. It packs in a faster single core processor clocked at 1.4 GHz. The other specs-512 MB RAM, 8GB memory, 5 MP camera, 720p video capture and connectivity options-remain same. The only disadvantage that the Omnia W suffers is the 3.7-inch capacitive display compared with the bigger 3.8 incher on the Radar. But then the Omnia clearly outdoes the Radar on the price front.

The Samsung Omnia W is made of plastic, so there isn't anything impressive about its looks. The 3.7-inch display looked small in front of the Radar. Thankfully, it didn't hamper the typing or the navigation experience. Along with the Windows Live account, we managed to configure our Gmail, Yahoo!, Outlook, Twitter and Facebook with ease. It also has the WP feature of integration of Facebook and Twitter in the contacts (people hub). We were able to comment on our friends' updates from that location. Giving value to the customer, the Omnia W packs in a few apps. These include FunShot, All Share, Mini Diary, Now and a wireless manger. The 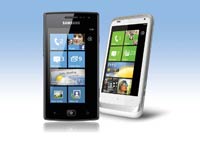 images captured by the 5 MP camera were above average and could be edited quickly using auto-fix.

BAG IT OR JUNK IT? Of the two Windows Mango phones, Omnia W is a better deal.

BAG IT OR JUNK IT? Looks good, performs well but will face competition from the Samsung Omnia W

Of the two handsets available in the market on the new Windows Phone Mango update, the HTC Radar is a more perfect blend of looks and functions. Made from a single piece of silver metal, the white plastic at the back gives it a rich feel. As the battery is non-removable, the SIM card slot is hiding behind the small removable panel at the bottom. The homescreen is divided into two, the first comprising big, colourful tiles. Hitting the arrow key pointing towards the right unveils the main menu.While Android devices prompt for Google account IDs, here a Windows Live ID is a must, specially for downloading applications from the Windows Marketplace.

Typing on the onscreen keypad was among the best we have experienced. Office Suite for documentation is painless and browsing web over the phone is a pleasant activity. HTC Radar scores full marks on the multimedia front as well. The sound output is nice and videos looked crisp. It also has a 5 MP camera that captures good images. The auto-fix feature in the album works well as does the onboard Photo Enhancer app. Powered by 1GHz processor along with 512MB RAM, the device performed smoothly, without hanging even once during the week-long testing. Some users who store a lot of data on the phone might be disappointed as it has 8 GB inbuilt memory, of which only 6.54 is available for use, and it doesn't support expandable memory. All this is accompanied with a good battery backup that lasted a day on constant connectivity. There is no denying that smartphones have simplified our lives. The addition of push email notifications, bigger and better touch displays and higher megapixel camera have paved way for a bigger battery. But even with a 1700 mAh capacity, their batteries often don't last more than a day. For victims of coughing batteries, Belkin has come up with a simple solution that can instantly energise their smartphone. The Power Pack 2000 is a compact device to refuel batteries. It has a USB port for connecting smartphones using data cable. It also has a microUSB port that can be plugged to a laptop using a USB-to-microUSB cable. There are two LED indicators that display how much charge is left in the pack. Once charged fully, it stores the battery for future use. Apparently, it can retain charge for over a month. While testing, we tried charging a few smartphones with over 1500 mAh battery and it did manage to put new life in them. Available in different capacities, the Power Pack 2000 is a smart device to have when you are on the move.

BAG IT OR JUNK IT? A must have for emergency situations


What the new mobile OS is all about