A SEBI committee moots physical settlement in derivatives. But the markets may not be ready for the transition yet. 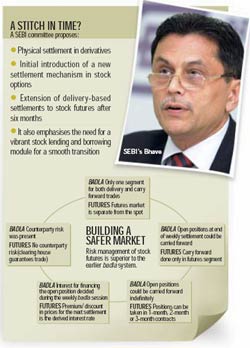 Click here to Enlarge
Derivatives trading has been an unqualified success story in the Indian equity markets. Launched in June 2000 with the introduction of index futures, over the years the market has grown in size and scale. The volumes have soared and on most days are three-to-four times that of the underlying cash market. Enthused by the response, market regulator Securities and Exchange Board of India (SEBI) has gradually introduced more products. In addition to index futures, index options and individual stock futures and options are actively traded on the NSE, which is the preferred exchange for derivatives trading by market participants.

The committee, headed by former Indian School of Business (ISB) Dean M. Rammohan Rao, has recommended that the physical settlement system be extended to stock futures, after testing it in stock options for six months. “While analysing this experience, parameters such as extent of convergence and ability to handle short-squeeze situations need to be considered,” says the committee report. In physical settlement, futures and options trade are settled with delivery of shares.

Market players now agree that the time may have come to gradually phase in physical settlement. For, the derivative market now seems more skewed in favour of speculators than hedgers and arbitragers. Speculators, for instance, find cash settlement beneficial since they do not (by definition) have an offsetting cash market position and cash settlement saves them the burden of operating in two markets.

On the other hand, it exposes hedgers and arbitragers to “basis risk”—due to the imperfect link between the futures and cash market in the absence of delivery-based system, the price movement of the same stock in the two markets may not be highly correlated, making hedging and arbitraging difficult. Physical settlement of derivative contracts, then, is likely to help hedgers and arbitragers avoid basis risk while imposing some additional costs on speculators. Says Yogesh Radke, Analyst, Edelweiss Securities: “It’s a good idea and would help in reducing market volatility.” However, a few hurdles have to be cleared before our markets can shift to physical settlement. For one, our markets require a vibrant stock lending and borrowing module.

SEBI’s L.C. Gupta Committee, which had laid down the roadmap for the development of the derivatives in 1998, had actually advocated that stock futures should be introduced only after a system for lending and borrowing of shares is in place. It, therefore, visualised physical exchange of shares for settling the trades executed in individual stock futures from the very beginning. What worried SEBI was that the introduction of a share lending and borrowing mechanism would make stock futures identical to the earlier system of badla, which had been misused by operators in the past. It, therefore, advocated cash settlement.

There are obvious similarities between badla and delivery-settled stock futures contracts. Badla was also a facility for borrowing and lending of shares and funds. Both futures and badla system then allow investors to buy stocks without huge cash outflow and help in leveraged trades. But analysts feel SEBI’s concerns that stock futures could also be misused are misplaced. Says Vijay Kanchan, VP (Derivatives), Dolat Capital: “Stock futures are safe products. The risk management is far superior to the badla system.”

Also, analysts underscore that chances of manipulation are greater with cash settlement. Once physical settlement is in place, manipulators would know that if they artificially rig stock prices, counter parties could impose delivery.

Vijay Kanchan
The immediate challenge before SEBI, then, is to build an active stock lending and borrowing module. The Stock Lending and Borrowing Scheme (SLBS), which started in April 2008, is yet to witness large participation by market players. Says Kanchan: “Right now the problem is there are few lenders, which has pushed up the cost of borrowing.” Adds Radke: “Mutual funds and insurance companies must be encouraged to participate in the borrowing and lending of shares to add depth to the market.”

Then, if physical settlement is to be allowed, regulators need to put in place mechanisms to prevent short squeezes (rapid increase in the price of a stock that occurs when there is a lack of supply and an excess of demand for the stock). The exchanges would have to lay down limits on daily exercise and assignment of stock futures and options to limit the ability to squeeze the market in the middle of the contract month. This would curb speculative activity which analysts feel would be healthy for the market. Says Radke: “Compulsion to deliver would mean lower participation. Volumes would come off.” Clearly, then, while physical settlement may be desirable, SEBI still has to lay the groundwork to ensure that the transition is smooth. This might make any immediate shift to a new settlement mechanism difficult.

Pulling out of the debt trap