A shot of cash

Mutual funds are holding a larger part of their corpus in cash, waiting for the volatility to subside, and the strategy has worked.

If the cash position OF mutual funds is any indication, the stock market could see some buying over the next few months. Equity mutual funds, at the end of August 2008, had about Rs 13,737 crore in cash, or 11 per cent of their corpus, that can be deployed in the stock markets, according to data from valuerearchonline. com. This was slightly lower than the cash balance of Rs 14,348 crore at the end of July 2008, as fund managers increased buying on dips. 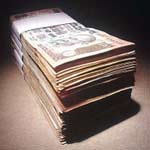 At the beginning of the year, cash as a percentage of the total overall corpus stood at 5.93 per cent. Usually, equity funds keep about 5-6 per cent of their total corpus in cash to manage day-today liquidity and also to bag any big buying opportunity. Since then, fund managers have been increasing their cash levels as a percentage of their portfolios. Given the carnage in the stock markets following the snowballing worldwide financial crisis, fund managers steadily increased their holdings this year. The cash levels peaked in May 2008 to Rs 17,664 crore—about 12.38 per cent of the equity corpus—as fund managers anticipated a major fall in the market. As of August 2008, however, the cash levels as a percentage of corpus dipped to 11 per cent from 11.2 per cent the previous month. 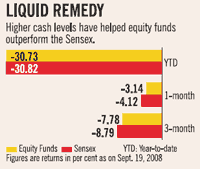 But is the higher cash holdings affecting fund performances? So far, it seems that fund managers have marginally benefitted in this falling market and have managed to eke out a small out-performance. Since January this year, the Sensex dipped 30.8 per cent to 14,042 (on September 19), while equity funds as a group fell 30.73 per cent. But on a 3-month basis, fund managers did far better as equity funds dipped 7.78 per cent compared to the Sensex’s fall of 8.79 per cent, suggesting that the fund managers were better prepared to meet the bear onslaught. In a one-month period, too, a similar picture unfolds as funds dipped 3.14 per cent against the Sensex’s fall of 4.12 per cent.

Cash management, of late, has become the key to a mutual fund’s overall performance. As the stock market is trading in range-bound or lower levels, fund managers with higher cash in their portfolios manage to outperform the markets. But in a bull market, the reverse is true. As stocks rise, fund managers with plenty of undeployed cash in their portfolios might find themselves lagging their peers. For now, the stock market can surely do with a little bit of cash infusion from fund managers.
TweetYoutube