Several public and private sector banks have recently cut their lending rates for consumer borrowings. Such a scenario offers investors who have invested in longer-term bond instruments a chance to make gains on their investments.

Several public and private sector banks have recently cut their lending rates for consumer borrowings. Such a scenario offers investors who have invested in longer-term bond instruments a chance to make decent gains on their investments. Even if RBI holds rates steady, as it is likely to do, given the rising rate of inflation (see Between the Devil and the Deep Sea), they will still stand to make a neat packet.

The last time this happened was way back in 1999, right up to 2002, when the rates in the economy nose dived to around 7 per cent. At that time, bond funds raked in doubledigit gains. When the rates recovered later, bond funds started lagging in performance.

Like all such market cycles, this one is expected to be favourable for bond funds. As domestic interest rates go down, or hold steady, bond funds make better gains on their corpuses. Even if the inflation rate rises to 5 per cent, from about 4.07 per cent now, there will be enough liquidity in the system to keep growth on track.

As bond fund managers take a call on the interest rate movements and construct a portfolio according to their assessment, interest rates play a key role in determining the composition of paper in their funds. Over the last few months, as interest rates have tended to harden, fund managers have moved towards longerterm bonds, essentially ones that mature in five, 10 or 15 years, indicating their optimism that bond funds will deliver better returns.

Typically, bonds are either short-term or long-term. The bonds with a higher tenures always have coupon rates (interest rate the bond carries) that progressively increase. Bonds with a maturity of 10 or more years have higher coupon rates to reflect the uncertainty of the future as well as the risk of inflation. A person buying such bonds should be reasonably sure that the interest rate will decline, which will help increase his returns. For instance, let us assume that a fund manager buys a bond XYZ worth Rs 100 with a coupon rate of 9 per cent and a maturity of 10 years. Bond prices have an inverse relationship with interest rates. If interest rates move up or down, bond prices will change in the opposite direction. Let us assume that the interest rate moves up to 10 per cent. The bond with a coupon rate of 9 per cent begins to look unattractive as the prevailing market rate is 10 per cent. To adjust the difference, the price of the bond XYZ begins to fall to cover that differential—and investors lose capital. In this case, bond XYZ’s market price falls by Rs 10 (the interest loss multiplied by the number of years to maturity). 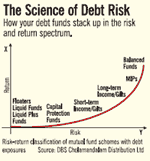 The other major influence on bond price is inflation. When the inflation rate falls or is set to decrease, bond prices rise even as coupon rates fall. On the other hand, if the inflation rate increases, the income from bonds will fail to compensate for the loss of buying power. Besides, exchange rates also affect bond prices as do international interest rates. “Money tends to get arbitraged between countries,” says D. Arulmany, Business Head, DBS Cholamandalam. Large institutions tend to make much of currency arbitrage, borrowing at one rate, earning interest at a higher rate.

Santosh Kamath
Corporate bonds (debentures) can also be part of a bond portfolio. In this scenario, the company’s financial performance and the profits it is generates is paramount. If rating agencies downgrade the company’s creditworthiness, the price of the bond falls, as it re-prices the increased risk of the bond. Among others, bond funds can also invest in paper that matures in a few days to a few years, and they can be government, corporate or municipal bonds. All these different types of debt paper make a complete bond fund portfolio.

The average tenure of all the debt instruments combined makes a bond fund uniquely positioned to make the best of interest rate fluctuations. Short-term bond funds are steady movers, whereas long-term bond funds swing the most, and the market offers all kinds of choices.

Typically, an income builder fund is highly sensitive to interest rates and have time horizons of one or more years. This fund invests in fixed income instruments with high maturities. Longterm GILT funds also carry a substantial rate risk and have paper of more than a year. “The safest of the lot are liquid funds, which expose the investor to low risks even over the period of one day,” says Rajiv Shastri, Head (Business Development & Strategic Initiatives), Lotus India Mutual Fund.

The consensus is that it is a good time to enter bond funds in the later part of March. Dynamic debt funds or active income funds are alternatives that manage interest rate risk actively, making them a suitable product for investors who don’t want to take a call on the market themselves.

“However, given the fact that these may be exposed to a reasonable amount of interest rate risk, I suggest that investments in these funds be made with an investment horizon of six months or more,” says Shastri.

D. Arulmany
Note also the size of a fund— the bigger it is the more the investors prefer the fund. Investors should also regularly track the benchmark index against which the fund has positioned itself. This gives an indication of the efficiency of the fund. Income funds use the CRISIL Composite Bond Fund Index as a benchmark while Liquid funds use CRISIL Liquid Fund Index. Bond funds should ideally outperform their respective indices.

Also, consider the risk of investing in a bond fund. If you have invested in a longer-term bond fund, and if the interest rate rises, your returns could diminish significantly in the very short term. But if you manage to hold on to your fund for the duration of its average maturity, the risk reduces significantly. As of now, it does seem unlikely that interest rate will go much higher.

For now, though, adding some medium-term bond funds in a falling, or stable, interest rate scenario can prove profitable. But monitor the net asset values regularly and stay invested for a year, at least. The lower rate cycle (as observed in the past) can last for a few years, so make the best of it.

Room for one more