For many families, loan repayments can get rough and uneasy. So, how can one manage one’s loans better. 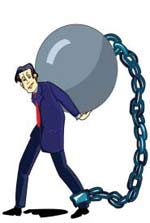 Ramesh Sehgal is a worried man. The bank inc reased the 34-year-old FMCG retail executive’s home loan rates twice in the last three years, driving up his monthly installment to Rs 16,819, up a stiff 29 per cent. When Sehgal first took the home loan from a well-known new generation bank back in 2005, banks were offering mouth-watering rates of 6.5-7 per cent per annum. Now, it’s 11.5 per cent.

What’s worse, despite three years of regular repayments amounting to Rs 4.03 lakh, Sehgal’s loan outstanding has hardly decreased. His Rs 17-lakh loan is down to just Rs 16.16 lakh. At current monthly installments, Sehgal will take 35 years to repay his loan in full, way beyond his original target of 20 years. “I won’t get my property documents even after 20 years. I will have to ask my son (currently three years old) to takeover the loan,” he jokes.

Sehgal’s plight is no different from most home loan takers’ right now. Interest rates have risen by more than 30 per cent in the last three years. The easy money policy that fuelled the credit boom has seen many households getting burdened by debt. Though exact household credit figures are not available, many leading banks had retail portfolios anywhere between 15 and 30 per cent of total loans in 2006-07, with a marginal increase in the loan base in the following year.

J. Karthikeyan
Assess your total loans
If you find yourself debt-ridden on car, mortgage or any other type of loan, take steps to lower your (debt) burden and make repayments easier on your wallet. Among the first things you must do is to estimate your total debt and calculate how much you still owe the banks. This will help you assess which loan you can eliminate first. The next step is a basic one: check out the high cost debts and see if you can shift these to a lower cost debt or get a lower interest rate by refinancing it. 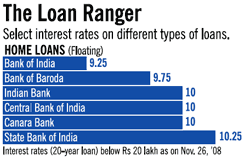 Click here to Enlarge
Sehgal, in fact, opted for refinancing of his home loan from a public sector bank that offered him a lower interest rate of 9.5 per cent. While the prepayment did cost him a penalty of 2.25 per cent of the outstanding, Sehgal reckons that, over the years, his savings will amount to a cool 30 per cent of the total net outgo at current rate of interest. More importantly, it will also help him manage his outstanding tenure better.

Know where you stand
To be able to re-negotiate your current loan with another bank, you need to have a good, clean record of monthly repayments. You also need to have adequate income to be eligible for the loan. In fact, during these days of credit squeeze, banks will make it difficult for you to procure a loan. Like Derek Symonds, a 34-year-old IT professional, found out to his dismay. Symonds has two ongoing home loans and a car loan. But his plans for refinancing his second house at a cheaper rate got rejected because of his high outstanding debts. His financiers wanted Symonds to rope in another earning member or close his outstanding car loan dues. The bank rejected his plea of co-opting his father, who was a pensioner for the loan, but were amenable to the suggestion of his earning wife becoming party to the loan. 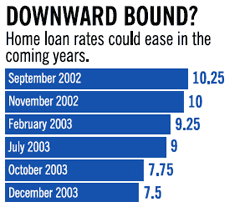 Click here to Enlarge
In fact, knowing the rules of lending will help you to maintain your financial future. Banks usually lend to people whom they assess as having good repayment capacities, but they limit loan paying capacity to a maximum of 60 times your gross monthly income for a home loan. This amount is reduced further after statutary deductions such as income tax, PF, and the remaining portion of the salary is multiplied by 100— which finally determines your actual repayment capacity for all loans. But wait. Bankers also check out your basic eligibility for a housing loan by considering two other factors and finally sanction a loan that is the least of the mentioned criteria, including repayment ability. If your income is under Rs 1 lakh per month but greater than Rs 20,000, then you are entitled to a housing loan, which would be approximately 48 times the gross salary. The market value of your property is also assessed and the loan amount determined after deducting a 15 per cent margin. The least of the three calculations is taken as the amount of loan that you can be entitled to.

mosimage If you are in the high income bracket, this could be relaxed a bit at the discretion of the bank. But for your own financial health, it’s best not to extend your borrowing limits. Says J. Karthikeyan, Director, Finerva Financial Solutions: “Your banker is in the best position to evaluate how much loan you can take. Listen to him, and don’t overstep this limit.”

Some individuals may have found themselves at the receiving end because they borrowed from multiple banks and overstepped borrowing limits. This turns into a double blow when interest rates rise significantly, stretching the already strained finances and increasing the chances of a default. Says Mukund Hari Jachak, Head (Retail Lending), Bank of Baroda, in Chennai: “Bankers check a person’s CIBIL rating as well as his credit card statement, and also other bank accounts. Any defaults will impact his ability to borrow more.”

Convert to low cost
The next step you should do is to evaluate the cost of loans and convert to a low-cost loan, wherever possible. If your credit card debt runs into five figures and you still haven’t managed to reduce it, convert it into a personal loan. Credit card debt is the costliest form of debt with interest rates as high as 50 per cent per annum. To see how serious a credit card loan is, let us assume you have a loan outstanding of Rs 1 lakh. If you pay Rs 5,000 a month towards principal, your loan gets closed in 20 installments. But as you are paying an interest of 3 per cent per month, it will take you 38-40 months to close the debt.

According to banking sources, personal loans can be negotiated on a caseto-case basis with a bank. Credit card loans can also be easily converted to personal loans at half the yearly interest rate. But don’t refinance your home, in case you are mortgage-free, to clear your credit card dues.

mosimage Prioritise your repayments
Your home loan is probably the most important loan for which you must always keep at least three future monthly installments in emergency funds. Car loans carry an interest rate of around 11.5-12.5 per cent these days. But if you can free up this asset by using some spare cash in your savings account, go for it. The interest rate in your savings account is merely 3.5 per cent, so it makes sense to pay off a 12 per cent car loan. On the other hand, if you have, say, a fixed deposit that pays you 12 per cent instead, don’t close your car loan yet. “If the general interest rate for deposits is higher than your car loan rate, it’s not prudent to close your car loan,” says Karthikeyan.

Use any extra cash that you receive to pare down debt. Individuals can also boost their incomes by working additional hours or moonlighting.

If you need to tide over a short-term crisis, use existing assets as collateral. “We recommend an assetbased borrowing for personal debts,” says Karthikeyan. In fact, borrowers can use bank overdrafts as interest is charged only on the amount you borrow and there is no question of an EMI on the entire value of the asset. This works out well on ‘car overdrafts’, for instance. If your car is worth Rs 7 lakh, and you are eligible for a loan of Rs 5.6 lakh (after the bank deducts the margin), you need not borrow the entire amount on day one—but draw on sums as you require them. Jewel loans availed by pledging the family gold with a bank also comes in handy as the interest charge on these is slightly lower than a car loan. Usually banks give loans of 75-80 per cent of the value of jewellery.

So, managing your debt in this downturn assumes importance because of the uncertainties involved. And remember, it’s easy to get into debt, but getting out of it takes time, lot of planning and some sacrifice to make loan repayments your priority. If you manage this well, it will sooner or later result in a secure financial future.

The storm in ESOPs

2008—The year that changed investing