The engineering sector is bursting with order flows, notwithstanding the economic crunch. Time to add them to your portfolio.

If there was a doubt over whether engineering companies face the prospect of a dip in earnings due to the economic slowdown, it’s time to cast those uncertainties aside. Apart from returning stellar performances in the first quarter of the current financial year (2008-09), the engineering sector, in fact, saw a significant increase in the size of its order book. This promises to keep its mills grinding for some time more, and its profitability on course.

Little surprise then, the sector got a boost lately. The BSE Capital Goods Index, which lagged the Sensex over the last one year, has outperformed the bellwether since July 1, 2008. The Capital Goods Index returned 26 per cent against the Sensex’s 15 per cent till August 5, 2008. A significant development for engineering and capital goods companies in the first quarter of 2008-09 is that the economy has not contracted too much just yet.

Demand for capital goods and engineering services is still robust despite the rising interest costs, and companies have not curbed their appetite for expansion. Order books for the four companies mentioned in the story increased by 45.6 per cent to a combined Rs 1.74 lakh crore between June 2007 and June 2008.

Another promising development for engineering companies is that lately, their focus has been on winning new orders with a costescalation clause. This will protect their margins against rising input costs in the coming months. Stocks of engineering companies were beaten down heavily since the beginning of the year because of concerns over rising interest rates and the slowing growth rate. These concerns, it is now evident, were premature. At current prices, many engineering companies have turned into value buys. Here are four that are likely to do very well in the near future.

BHEL
India’s largest power equipment manufacturer needs no introduction to investors. This low-cost manufacturer is now expanding its capacities and moving into higher capacity generators to cater to the growing demand from India’s power sector. Despite its size, the company has been clocking growth rates in revenues and profits of around 30 per cent per annum. Given its huge order book, it’s a solid stock to buy for the long haul. 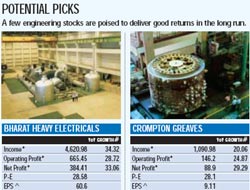 Click here to Enlarge
Another power equipment manufacturer, Crompton Greaves is also witnessing strong growth in the overseas market. The company produces high technology electrical products, essentially for power distribution and transmission, and operates in three business segments—power, industrial systems and consumer products. It also has a strong list of clients in the domestic market. With the government’s thrust on the power sector, Crompton is set to do well in the coming years.

Larsen & Toubro
With its entry into new thrust areas like ship building, railways, aviation, nuclear power and defence, Larsen & Toubro is among the fastest-growing Indian engineering companies. This will also add to its already strong order book position of Rs 56,366 crore. With the exception of construction, the engineering and equipment segments are all on fifth gear and the company has reported an income growth of 50.6 per cent in the first quarter of 2008-09, compared to the same quarter last year. As India builds new plants, L&T, with its strong financial muscle, and proven execution skills, is a must-have in any portfolio.

Punj Lloyd
This is a fast-growing player in the engineering and construction space, particularly in the hydrocarbons segment. It builds pipelines and storage tankers for the oil and gas industry, which is expected to grow by leaps in the coming years. Over the years, the company has scaled up the size of its business and has been taking complex and higher margin projects. While the domestic economy is pausing for a bit of fresh air, there’s earnings visibility for this budding engineering company. Investors can accumulate this stock in their portfolio.