The hunt for value

The market is hogging the limelight these days and the incessantly falling sensex is creating excellent buying opportunities for investors despite the gut-wrenching uncertainty.

Cricket and the stock market are hogging the headlines these days, the former for its highs and the latter for its lows. And both hold the promise of greater exhilaration for the average Indian. So, while the Indian cricket team looks like recording its biggest ever Test series win against the Aussies, the incessantly falling stock market is creating excellent buying opportunities for investors despite the gut-wrenching uncertainty.

Click here to Enlarge
Indeed, the carnage on Dalal Street has been unprecedented. Large-cap stocks have lost 57 per cent, mid-caps 69 per cent and small caps 73 per cent from their peak levels in January. Investors who took the plunge in the stock markets either directly or through mutual funds two years ago feel cheated as stock values are down to their two year-lows. The wealth created over the last two years has gone up in smoke. People are running for cover and taking shelter in other asset classes such as gold and fixed deposits. Nobody knows when all this will end.

But ironically, it’s the severity of the fall that has made stocks that much more alluring. They are nearly as cheap now as they were five years ago when markets were just entering the longest bull-run in the India stock market history. The price to book value—the basic valuation parameter that is obtained by dividing the book value of a company by its stock price—of the largecap stocks that make up the Sensex and the Nifty, has now fallen to its May 2003 levels. The mid-cap stocks and the Top-100 companies by market capitalisation are also trading at price to book values that are closer to their 2003 levels. 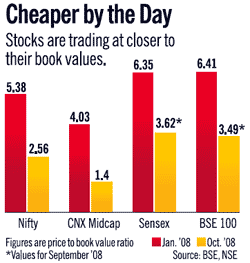 India’s top value investors see enormous opportunities at present for picking stocks at a huge discount. “It’s the uncertainty and panic that causes good prices to emerge as investors tend to overreact to every news flow. My sense is that unless there is a complete breakdown of the financial system, markets will soon bottom out,” says Chetan Parikh, Director of Jeetay Investments and an ardent follower of Warren Buffett and his investment principles. He believes that the prices at which stocks are available today are as good as buying a risky bond with a high but uncertain income stream. He has a word of caution, though: “Price by itself has no meaning. You have to look at the underlying value in the company vis-à-vis its market price.”

Bharat Shah, CEO & Managing Partner at ASK Investment Managers and a former mutual fund manager, echoes Parikh. He says: “It isn’t as if the fundamentals of companies have deteriorated. But when irrationality takes over, then finding the bottom becomes mere guess work.” It’s bizarre to see reasonable businesses of decent sizes, profits and reasonable track record being available at earnings multiple of two to four times, he adds.

But not all value investors are gung-ho about valuations. “I am staying away from this market. I have stayed away from it since 2004. I am keeping 70 per cent of my assets in cash and the balance in stocks. There is going to be a big change of the regime. Capitalism will not be the same again. The notion of having free markets may cease to exist,” says octogenarian Chandrakant Sampat, a well-known investor with a sizeable following in the investment fraternity. He believes that value can only emerge if there is capital formation across economies and they are able to earn more than the current cost of capital.

How safe is debt?