Unprecedented wealth creation in the last few years has not just pushed up the number of wealthy individuals in India, but it has managed to change some of the consuming and investing behaviour of this privileged and distinguished lot.

Unprecedented wealth creation in the last few years has not just pushed up the number of wealthy individuals in India, but it has managed to change some of the consuming and investing behaviour of this privileged and distinguished lot. Like in any geography, breaking into the wealth club is difficult. But once there, it becomes a different world.

The consumption patterns have changed noticeably from the ubiquitous presence of global luxury brands in India, be it cars, holidays or fashion brands. However, more subtle changes are taking place as to where the rich park their wealth. And nowhere can there be a better evidence than in the rising number of wealth management experts—virtually all the financial services firms are pitching for wealth management services. 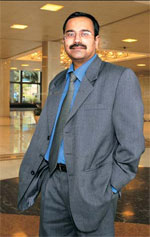 The millionaire’s list in India is growing. According to CapGemini-Merrill Lynch Wealth Report 2007, the number of High Net Worth Individuals (HNWIs)—those having an investible surplus of over $1 million (Rs 4.1 crore)—rose by 20.5 per cent in India from 83,000 to 100,000 in 2006. The wealth creation spree is only likely to continue. Last year, Barclays Capital had estimated that India’s wealth market will be growing at least 15 per cent a year in the following three years with assets under management hitting $256 billion (Rs 10,49,600 crore).

It’s not just that their numbers are rising; the nouveau rich are joining the wealth club from wide ranging mix of people. “The conventional mix was made up of traditionally wealthy, large business owners, professionals and senior managers in large corporate houses,” says Sharad Sharma, Head (Private Banking), BNP Paribas India, adding, “Now, there is an emergence of first generation entrepreneurs running their businesses, those who have sold stakes in their companies and employees with employee stock options.”

That happened on the back of stupendous appreciation in the capital market. Anup Bagchi, Head (Global Private Banking), ICICI Bank, believes that the sheer momentum of re-rating that happens on equity dilution through public offer has literally changed the fortunes of many promoters. And that has also benefitted the employees who have an ESOPs-linked package. While earlier stock options were pretty much restricted to IT companies, their spread over the past few years has increased to other sectors.

The uber-rich are also getting younger. “On an average, the age of the HNWI client has declined. It is not surprising to find someone in their early 30s, whereas earlier it would mostly be people who were older,” says Amit Sarup, Head (Wealth Management), Religare Enterprises. Moreover, as Harpreet Singh, Business Director (Wealth Management), Centurion Bank of Punjab, points out: “The wealth creation in Tier II and Tier III cities is also quite dramatic.” That has been small but a change, nevertheless, from the mainly metro geographic skew of great wealth.

The rich are also changing their investment patterns. Earlier, the predominant investment behaviour of HNWIs was risk-averse. The traditional portfolio was largely made of cash, fixed income instruments coupled with some small slivers of equity. This was, of course, after real estate investments.

Malhotra has seen the proportion of fixed income assets in the overall portfolio decline from 60-70 per cent to just around 40 per cent over the years.

The rising generation of wealthy is amenable to higher risk and, therefore, higher return investments. Note the rise of different classes of equity investments in India in the past few years—from private equity and venture funding to innovative structures in mutual funds. “Many of these HNWIs are younger than the earlier generation of HNWIs and since they have a longer time to remain invested, they are more willing to take risks.

They are also more confident about future incomes,” says Bagchi. The mantra has changed from preserving wealth to enhancing wealth. “Also, as surplus funds get larger, the ability to opt for higherrisk, higher-return investments improves,” says Jaipdeep Hansraj, Business Head, Kotak Wealth Management. In the last year, new products such as gold exchange traded funds have been introduced. Futures and commodities, bullion are common lingo in the rich club.

This is not to say that the capital preservation is out. The higher-risk appetite coupled with a requirement to preserve wealth has led to the rise of structured products, some of which are capital-protected. They offer wealth preservation with some equity-like upsides. They are often tailor-made to suit the requirements of the big investors. Hansraj says that such structured products have risen fast in popularity in the last six-to-12 months.

He says that around 15-20 per cent of the total assets under management are flowing into such products. “These are typically investors who are not happy with the returns from their fixed income portfolio.” Kotak manages some Rs 10,000 crore of funds spread over 3,500 families.

The HNWI investor is now also keen to form a broad-based and asset-diversified portfolio. While some of that emerges in trends such as art or wine funds, another manner of diversification is overseas investments through the possibility to invest $100,000 (Rs 41 lakh) every year directly in assets abroad as allowed by the RBI, or to invest via mutual funds, which is why there’s a plethora of new mutual funds with overseas investing themes.

“There is a growing appetite and acceptance for investment (directly or through investment vehicles) into real estate and more exotic asset classes such as art and wines. However, these form a small part of their overall portfolio,” says Sharma.

However, much of the investment avenues are still clogged due to regulatory uncertainties. This is evident from the fact that interest in real estate is high as indicated by private equity play in real estate, but REITs as a product category has yet to happen, ditto for products such as forex or commodity derivatives. When the barriers come down, the avenues for HNWI investors will only balloon.

To shop or not?