The year that changed investing

2008’s extreme wealth destruction put wealth managers in a spot of bother. BT surveys their market strategies, and what they learned from the crisis.

New Delhi-based tax consultant, Deepak Jain, was among the few investors who manged to pull through a difficult 2008. The 31-year-old started investing in equities in mid-2006 when the Sensex crossed the 10,000 mark. Jain accumulated stocks of blue-chip companies and built his corpus brick by brick. His investment grew from Rs 5 lakh to Rs 8 lakh by July 2007.

When the Sensex surged past 16,000 levels in September 2007, Deepak concluded that markets were overheated. He decided to sell. “As I feared a crash, I sold over 75 per cent (Rs 6 lakh) of my equity portfolio and switched to savings accounts and fixed deposits,” he says. Although the balance portfolio of about 25 per cent (Rs 2 lakh) has dipped to Rs 1 lakh, his overall investments are in a profit. Not many investors were lucky enough to sell early in the bull market. Some, like Gurgaon-based Prateek Patodia managed to pull out just before things got worse.

The 28-year-old entrepreneur had 95 per cent of his assets invested in mutual funds (MFs), which he began accumulating from March 2007. His initial investment of Rs 3 lakh turned to Rs 4.5 lakh at the peak of the bull market in January 2008. The crash took his corpus to Rs 4 lakh in a matter of weeks. 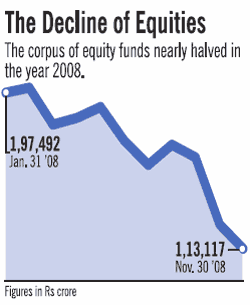 “The crash saw my funds’ NAVs dip by over 20 per cent. I was waiting for a short bull run to sell. In March 2008, I got the opportunity and took a profit of Rs 1 lakh,” he says. He also invested Rs 10 lakh in a gold fund in September last year. In August 2008, after the fund was up 50 per cent, nearly three-fouths of his gold portfolio earned him a tidy profit of Rs 3.5 lakh. Even today, the balance is up nearly 35 per cent.But for a handful of fortunate investors, there are thousands others who see 2008 as a forgetful year. Although the year began on a promising note—the Sensex hit a record high of 21206.77 on January 10, 2008—the reversal in the stock market has been equally dramatic.

Asset prices—including commodities, with the exception of gold—have crashed by more than 50 per cent. Debt markets struggled to find momentum until the last few months, largely because of softening of the high interest rate regime. Says Akhilesh Singh, Head (Wealth Management), Emkay Global Financial Services: “Despite the surge in volatility towards the end of 2007, everyone was expecting Sensex to touch a minimum of 25,000 points by early 2008, but that didn’t happen. Since January 21, 2008, the market has been trending downwards.” Click here to Enlarge
To many panicky investors, it might seem like salvage time. But that’s precisely what investors shouldn’t do now. Even those who were bargain hunting in the middle of 2008 saw their networths dip as the Sensex crashed to nearly 8,000 levels in November 2008. Says D.K. Aggarwal, MD, SMC Wealth Management Services: “Many retail investors have burnt their fingers badly. Investors, who were bottom fishing after the January 2008 crash, have seen the value of their shares drop.” But smart money knows that the markets will recover and savvy investors are still clinging on to their investments.It’s surely not the time to sell now as stock prices are not attractive at the moment. Says Aggarwal: “If you do not need the money, wait for the markets to recover.”

Load up on debt
Analysts suggest that investors should rebalance their portfolios to include more debt paper. Debt instruments, which were out of favour till the latter half of 2008, have turned attractive as interest rates have started to dip. Bond prices surge while interest rates fall. Funds that have a larger chunk of debt instruments that will mature over a longer period will benefit the most. Hence, it’s important for investors to look at the average maturity of a fund’s debt holdings. Says Singh: “The interest rate is looking benign and this directly benefits gilt funds and debt instruments.” Inflation, too, is trending down, which signals further rate cuts. “Over the next two months, investors should build a portfolio with 80 per cent debt and 20 per cent equity. In the next bull market, the equity portion will increase to 40-50 per cent of the entire portfolio,” says Singh.

Build a corpus of solid blue chip companies, but your holding period should increase to at least three years to minimise the risk in your portfolio. As of now, the global economy is in a recession and the global liquidity crunch is expected to last for a year or two.

Position your equity portfolio in such a way that it does not contain stocks that are too dependent on the global economy for growth. Hence, export-driven companies don’t make the cut. Diversify, for it not only reduces risk, but also increases the chances of a better return. Investors can accumulate select infrastructure, pharma and FMCG stocks. Investors can also look for opportunities in the global markets. “Investors can try their hand at international equities, real estate and art with at least a 3-year investment horizon,” says Iyengar.

The role of wealth managers has now become all the more important than before. Says Aggarwal: “Professional wealth managers go a long way in understanding your goals, your risk profile, your needs and other nitty-gritty of your financial decisions. Based on their dynamic investment strategies, they have several plans to enable you to grow your wealth over time. It is better to involve professionals to help you tide through these turbulent times.”