What to do with your ULIP?

With the stock markets going nowhere, ULIP schemes are struggling. ULIP corpus has taken a hit, but don’t get out of it in a hurry. We tell you why and how to stay up for the long-term.

When Rajendra Prasad, 40, a salaried professional, bought a ULIP plan from a Mumbai-based insurance company three years ago, the bull run in the stock market was already underway.

Puneet Nanda
The all-round surge in equity prices resulted in the market value of his ULIP corpus swelling at a compounded annual growth rate of 15 per cent over the last three years. But the volatility over the last nine months has unnerved Prasad. His corpus has shrunk by more than 35 per cent from its peak in January 2008, and he is now considering exiting his ULIP—he thinks he will still be able to walk away with some gains overall.

Like Prasad, many investors are wondering what to do with their ULIP investments. The big questions on their minds are: What will happen if they exit? And should they wait till maturity? Consider this: over the last one year, investors who bought a ULIP with a 100 per cent equity scheme saw their corpus dip nearly 2 per cent on average; those who opted for a balanced scheme with 60 per cent investment in equities managed to eke out a gain of 2.97 per cent on average till September 4, 2008. Over the same period, the Sensex lost 3.5 per cent. While ULIPs as a category did manage to do better than the BSE Sensex, investors like Prasad are wondering whether they ought to cash out.

Not just yet
Should they exit now? Not if the stock market has dipped too low for them to make a profitable exit. Then, there will be the cost of surrendering the policy—investors have to pay a surrender charge to the insurance company, which stands at 4-8 per cent of the corpus after the third year, depending on the plan. For investors, this is a steep price to pay. Says J. Karthikeyan, a Certified Financial Planner and Director, Finerva Financial Solutions: “The investor has to pay a surrender charge, and the corpus gets reduced to that extent. In some cases, the charges are so heavy that the investor is left with little gains.” 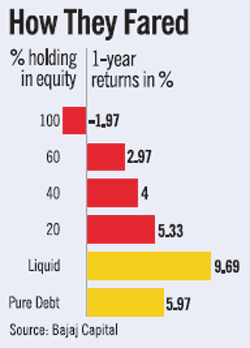 For example, if you invest Rs 1 lakh in ULIPs, your investment corpus of Rs 70,000 (after deducting the upfront costs) has to grow 12.56 per cent per annum for three years to come back to the original Rs 1 lakh you invested. Besides, other charges, such as mortality charges and those for fund management and policy administration, are also dedcuted from your corpus. Thus, moving out of a ULIP in the first five years does not benefit investors at all.

Financial planners say it could take about 6-7 years for an investment corpus to equal or exceed the sum assured, and that, too, if the stock market gives an above-average returns. “It could take as long as 13 years for ULIPs to match the returns with the costs of a term plan and equity mutual fund combined.

You should also know that charges vary across different ULIPs: some charge costs upfront; others tend to stagger the costs over the tenure of the fund. The latter will have a higher exit charge if you surrender it before the stipulated time frame. Says Puneet Nanda, Chief Investment Officer, Prudential ICICI Life Insurance: “Products that do not recover their charges in the early years tend to levy them through the plan tenure and impose stiff surrender charges till at least 10 years. Likewise, products offering a capital guarantee have to keep higher solvency margins and, thus, levy higher charges.” All these costs are recovered from investors, if they decide to surrender early.

The long-only investor
ULIPs are products addressed at the long-only investor—essentially longterm investors. They help create a corpus, say, for your young children. Says Karthikeyan: “We recommend ULIPs to customers in need of child plans or for retirement. Here, the investor has a clear goal and is disciplined to meet the objective.” ULIPs for the short-term can prove very expensive for investors— and complicated, too. Says Nanda: “ULIPs are not simple products.

Customers need to decide on product suitability first—the fund management aspect (unlike a mutual fund) is secondary.” Another reason for you to stay invested in a ULIP is the fact that the market is cheap now. The stock market has already corrected by a big margin over the last nine months—the Sensex has shed almost 32 per cent from its peak of 21,000 in January this year. Experts say that moving out of equity immediately after a market downturn, such as the current one, is like plugging a hole after the water has leaked. Also, the Indian economy is still in a growth mode, although there will be short-term hiccups along the way.

Switch it on
A better alternative to cashing out from a ULIP is to use the facility for switching between different types of funds. ULIP investors are usually allowed about four switches free in a year and up to a total of 54 switches, which they rarely use. So, if you think that the market is peaking out or if the P/E multiple of the Sensex has inched higher, you can switch a part of your funds to debt. “Insurance companies allow investors the option of being able to easily switch from an equity fund to a balanced or a liquid fund. Use this prudently,” says Karthikeyan. Click here to Enlarge
So, if you think that the stock market is going to go down further, you can move out of equity and into debt. And when the markets have stabilised, you can re-enter the fund, perhaps at a lower net asset value, and profit from the spread.

However, investors must use this tool with caution. Market-savvy investors do use this, but as Nanda points out, it’s difficult to regularly time the market. “We seldom find investors moving in and out of funds. Mostly, this happens when an investor changes his risk profile according to his age.”

As of now, going Prasad’s way won’t be prudent. If you have opted for the debt option, switch a bit of your corpus to equity, as the stock markets have come off their highs. Remember, the best time to move out of your ULIP is when your assets in the plan have grown far bigger than your sum assured and the total premium you have paid, or when the plan has no surrender charges. Such a situation will arise only if you have been with your fund long enough for it to deliver the promised returns.

Back to the gilt floor