Pranab As President: The race for Raisina Hill is virtually over. Finance Minister Pranab Mukherjee is all set to occupy the country's highest post. With the SP, BSP, and other parties offering support, West Bengal Chief Minister Mamata Banerjee, who opposed his candidature was left stranded.

CORPORATE
Corporate leaders are worried about India's image. Among the latest to express their anguish were tech giants N.R. Narayana Murthy and Azim Premji. The Infosys co-founder Murthy said he felt sad at the state of affairs, but the problems were selfcreated and could be corrected. Wipro's Chairman Premji's blunt assessment was that the country was working without a leader, and if things did not change, India would fall behind for years. Mukesh Ambani
Reliance Industries' CMD Mukesh Ambani, at odds with the petroleum ministry over falling KG-D6 gas output, has presented upbeat prospects for the company at the recent annual general meeting. Ambani sees the company's retail business taking centre stage in the months to come. He said RIL's broadband wireless plans would be a significant value creator for the firm and its shareholders. Reliance shares have risen barely 4.4 per cent this year, trailing a seven per cent rise in the Sensex.


ECONOMY
Global ratings agency Standard & Poor's has warned that India may lose its investment grade. If that happens, India will be the first BRIC (an acronym coined by Goldman Sachs economists to group the emerging economies of Brazil, Russia, India and China) nation that may be downgraded to 'junk' status. Fitch Ratings said Europe's sovereign debt crisis may pressure the ratings of India and other Asian nations. Finance Minister Pranab Mukherjee, however, was confident of a turnaround in the economy in the coming months. 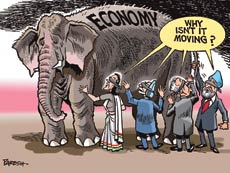 Industrial output, which dropped sharply to 0.1 per cent in April from 5.3 per cent a year ago, added to the gloom. Inflation accelerated in May, rising higher than that of the major economies and India's peers in BRIC. Food and fuel prices contributed to the 7.55 per cent rise in the wholesale price index over a year earlier. up from 7.23 per cent in April. Trade data showed exports slumped more than four per cent in May from a year earlier, the second fall in three months. The trade deficit widened to $16.3 billion.

$1 trillion Global merger and acquisition deal volumes in May, taking a month longer to reach the psychological mark than last year. This year it took 145 days (till May 28) to reach the $1 trillion mark, while last year it reached the level in just 118 days (till April 28), according to Dealogic data.

MARKETS
India managed to avoid US financial sanctions over the issue of Iranian oil imports. India and six other nations will not be penalised as they have proved that they have reduced the volume of oil they import from Iran. India is Iran's second biggest crude client.

The finance ministry has directed all public sector banks to work out a mechanism to address customer complaints within 21 days.

COMING UP
The Reserve Bank of India will discuss exchange rate volatility and export credit issues with export assocations and banks on June 21.

.. Bullet trains, with speeds up to 300 km an hour, between Mumbai and Ahmedabad, will be a reality soon. The 492-km stretch will be covered in two and a half hours, as opposed to seven hours now.

.. Over 130 heads of states will attend the Rio+20 summit from June 20 to 22. Non-binding sustainable development goals in areas such as food security, water and energy are on the cards.

What Dentsu's buyout of Aegis means for India