Necessity, in Brent Fraser “billy” Bowden’s case, was, indeed, the mother of invention, as rheumatoid arthritis made him invent the crooked finger signal that has spelt doom for many a batsman in international cricket.

Necessity, in Brent Fraser “billy” Bowden’s case, was, indeed, the mother of invention, as rheumatoid arthritis made him invent the crooked finger signal that has spelt doom for many a batsman in international cricket. 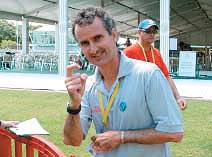 Billy Bowden
Along the way, the showman umpire invented a whole new range of umpiring signals— easily making him the most colourful umpire in the world. It was, thus, a natural progression for this 45-year-old New Zealander to sign up with Delhi-based celebrity management agency, Creatigies Communications, which will field him in the advertising arena to endorse Indian brands. “I see this as an opportunity to discover how the market reacts to umpires as brand ambassadors,” says Bowden, who is currently officiating in IPL. In fact, he is quite confident of success as an endorser of brands—“but not those of tobacco and alcohol companies,” he clarifies.

To be sure, he is not the first umpire to endorse a brand; Englishman Dickie Bird shot to fame in Pepsi’s “Nothing official about it” campaign during the 1996 Cricket World Cup.

Navroze Dhondy, CEO, Creatigies Communications, says Bowden’s vibrant personality can be put to good use in the advertising world. “He appeals to the young and there are enough brands that can ride his personality,” reasons Dhondy, who is hardselling Bowden to a host of FMCG and white goods companies. And while there’s no base price below which Bowden won’t talk, Dhondy admits that as an umpire, Bowden’s market value will be much less than those of players. But the very fact that he has been signed up shows that umpires are also emerging as stars in their own right.