Nariman Point in Mumbai, as the fifth costliest central business district in the world, by global consultancy firm Cushman & Wakefield. Connaught Place, Delhi, also climbed to #10, from 12th place a year ago. 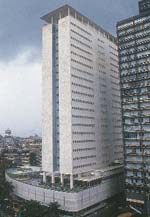 Mumbai's Nariman Point
Ranked: Nariman Point in Mumbai, as the fifth costliest central business district in the world, by global consultancy firm Cushman & Wakefield. Connaught Place, Delhi, also climbed to #10, from 12th place a year ago. Properties in these prime locations are costlier to buy or rent than any in New York, Shanghai, Dubai and Frankfurt.

Dipped: To 4.07 per cent, the inflation rate for the week-ended February 2, from 4.11 per cent in the previous week and 6.58 per cent in the corresponding week a year ago. The fall in the wholesale price index was mainly driven by lower prices of fruit, vegetables, spices and condiments.

Agreed: India and Pakistan, to double the number of weekly flights between the two nations and start flights linking their captials. The neighbours agreed to operate 28 flights a week, up from the current level of 12. As part of the agreement, three airlines from each country will operate services on the agreed routes. Only one airline from each side is currently allowed to fly between India and Pakistan.

Received: By Reliance Industries, approval from the Supreme Court, to build a part of a pipeline from its K-G Basin gas field through a bird sanctuary. This removes a major hurdle in the path of RIL’s Rs 11,500 crore, 940 km long pipeline connecting Kakinada on the east coast with pipelines in the west.

Ratan Tata
Announced: Between Tata Advanced Systems (TAS) and US based Sikorsky Aircraft Corporation, a pact under which the former will manufacture chopper cabins in India. TAS is a wholly-owned subsidiary of Tata Industries and provides integrated solutions for the defence and aerospace sectors.