Early this month, when Sunil Bharti Mittal, in an interview with the Times of India, mentioned that many telcos had quit during an adverse phase, while his own brand grew against all odds, it raised the hackles of Rajya Sabha MP and former promoter of BPL Mobile, Rajeev Chandrasekhar.

Early this month, when Sunil Bharti Mittal, in an interview with the Times of India, mentioned that many telcos had quit during an adverse phase, while his own brand grew against all odds, it raised the hackles of Rajya Sabha MP and former promoter of BPL Mobile, Rajeev Chandrasekhar.

Reacting sharply to Mittal’s references, the 43-year-old wrote, in a signed rejoinder in the same paper: “To characterise me as a quitter requires either a lot of naiveté and ignorance or is a deliberate doomed-to-fail plan to mischaracterise me.” Mittal, 49, was double-quick in defusing the situation.

In an open-letter, again in the same paper, he sought to soothe his one-time rival’s feelings, saying that he was a great telecom warrior and that the reference to him was “misplaced”.

The industry is now looking forward to seeing the two have a drink together.

As other honchos in India Inc. were winding down for an easy weekend last fortnight, Gautam Singhania, 42, was busy strapping himself to the driver’s seat of a Ferrari.

It was September 14th and Singhania, CMD of Raymond, was getting ready for Cannonball 8000 Rally, where every year about 150 ultra-rich fast car enthusiasts take to the wheel for a three-day run across Europe, starting in London and winding up in Zagreb, via Brussels and Prague.

His third year at the rally, itself just five years old, Singhania has also driven in a Lamborghini earlier. Cannonball done, he had plans of visiting the factories of Ferrari, Lamborghini, and Zonda. “This will be my first ever visit to these factories,” Singhania told BT. But don’t think it was all fun for the man in Europe. He also took time off to attend the board meeting of his Belgium JV, UCO.

From prey to predator

All these recent years, as his critics kept speculating that B. Ramalinga Raju, 52, would sell out, the Chairman of Satyam Computer Services kept insisting that he would not be acquired, but acquire. Finally, he’s walking the talk. Raju, who launched Satyam way back in 1987, is lining up $1 billion in war chest for acquisitions. “These will have to be those that have a lot of synergy with what we are doing,” says Raju. Acquire he must. Satyam’s No. 4 position is already under threat, thanks to Cognizant Technology Solutions, besides which profits are under pressure.

Analysts say no billion-dollar IT company can afford to be everything to every customer, and that it must pick and choose its areas carefully. It will be interesting to see what sort of acquisitions Raju makes.

In the three years that he’s been with german cash-n-carry giant, Metro, Martin Dlouhy has turned around operations in Russia, Czech Republic and Slovakia. It’s no wonder, then, that the 39-year-old has been despatched to India, where Metro has just three outlets to show for a four-year presence. 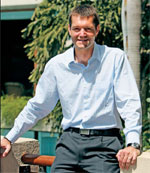 In India since July, Dlouhy has been busy getting a feel of the place. First impressions? The Indian retail scene is like what Russia’s was some years ago, and he’s very impressed with the high-voltage growth of the economy.

“We will identify, say, different clusters and open outlets in each one of them,” says the avid mountain biker, who’s moved to India with his family. India isn’t the easiest of retail markets. But, then, isn’t Dlouhy the sort of guy who likes riding uphill just for fun?

Breather on the Greens

A year after he joined private equity firm ACTIS, Sanjeev Sharma, the former Nokia India Managing Director, is taking a break for nearly a year.

After his 12-month contract with Actis came to an end, Sharma, 46, who helped turn around Actis investee, Phoenix Lamps, plans to spend time with his family and practise his golf, while he evaluates options for the future.

Sharma, who quit Nokia after a successful stint there because he didn’t want a global assignment with the Finnish mobile phones giant, may well be starting a trend where high-flying executives decide to take a mid-career breather before they plunge back into stress-laden assignments. As Sharma says, “These days it is common for people like me to take a long break.”

Yes, he may be pictured here in an open-necked shirt, but Shantanu Mukerji, the new country manager of Italian uber luxury men’s fashion house, Ermeneglido Zegna, will be responsible for selling the brand’s storied suits in India. That shouldn’t be a problem because Mukerji is no stranger to luxury brands. 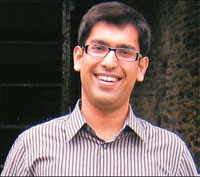 For he comes to Zegna, which opened a new 3,000-sq. ft flagship store in Mumbai recently, from LVMH Watch and Jewellery, where the 30-year-old was involved with developing brands in India and South Asia. Thrilled by the move to Zegna, the IIT-IIM alum says it’s a unique opportunity. “Zegna is a heritage brand recognised the world over.

As the economies of Asia and India rise and flourish, the markets here will demand quality and Zegna epitomises this very trait. The challenge is to communicate the inherent characteristics of this world-class brand and establish its rightful position.”