Mapping India Theirs is a nondescript office in Delhi's Okhla Industrial Area. But there is nothing nondescript about MapmyIndia's navigation products. Rakesh Verma, 60, like many engineers before him, had moved to the United States and settled down to a contented suburban life. But when he did come back to India, he lamented the lack of digital maps and in 1997 started MapmyIndia, a venture which was to do just that. "We started out with online maps but that was hampered by lack of connectivity. We did make money selling data to logistics companies but we realised that if we have to grow we have to move up the value chain," he explains. Today, MapmyIndia navigation devices - available at Rs 8,000 upwards - have local address information relating to 18 Indian cities. Son Rohan Verma, 24, is now persuading auto firms to install navigation software at the factory itself. "Today, our software has been adopted by BMW, Hyundai, Ford and Mitsubishi," says Verma Junior. Aiming to grow revenues from Rs50 crore at present to Rs1,000 crore five years from now, the Vermas are hoping that Indians will pick up navigation devices instead of asking for directions. Tiziana Dominguez, Global Creative Director, Adolfo Dominguez
This 25-year-old is heiress to a global fashion brand. Walking down the ramp comes naturally to her. Adolfo Dominguez, the brand she represents, was the first Spanish fashion label to go global, and now Tiziana Domínguez is bringing this brand, known for its minimalistic design, to India. She grew up around seamstresses. Moving into design was a natural progression for her, just as it had been with her modelling career earlier. "Our slogan is wrinkles are beautiful and we are all for organic materials, nude and pastel colours. I believe our brand is compatible with Indian textiles and sensibilities," says Domínguez, who claims to have a deep connect with India. "My parents practise eastern spirituality and value Indian culture and traditions. I love Indian food, and even frequent Indian restaurants in Spain and the US." She hopes to return soon for yoga retreats and cooking classes. Maybe she could even walk down the runway at one of India's myriad fashion weeks. 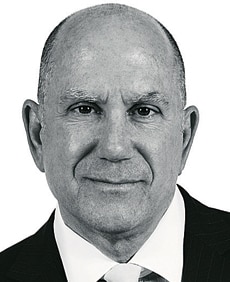 Laurence J. Boschetto, President and CEO, Draftfcb
"Our agencies in different regions have a very strong hold on their local businesses. That is why we remained unaffected during the global slowdown," says Laurence Boschetto, 56, who heads advertising giant Draftfcb. He is in India to "obviously" celebrate the golden jubilee of his Indian subsidiary, Draftfcb Ulka but it is stocktaking that is taking up most of his time. "I want to clearly send out the message that bright, young people have global opportunities in our system," he says, adding: "We have had a two-decade-long relationship with our clients and our leaders here are also stable. This has helped the agency grow and we are actually on the topmost rung here."

Aruna Jayanthi, CEO, Capgemini India
Aruna Jayanthi first walked into the offices of Capgemini India a decade ago when it employed just 70 people. The Paris-based outsourcer had acquired Ernst & Young Consulting and inherited its small India unit. Today, Capgemini has its largest set-up in India with over 30,000 employees. Over 15,000 people were hired in 2010 and Jayanthi, who has just been appointed the head of Capgemini India, expects to sustain this momentum for some years to come. "India today accounts for around 30 per cent of Capgemini's staff and we expect this to go up to 50 per cent in the next few years," she says. "We expect the country to be also our global hub of innovation." Jayanthi will have plenty of work on her hands - global rivals IBM and Accenture are much bigger in India and Indian competitors are quickly increasing their onsite headcount. "We are yet the number one outsourcer in Europe," says Jayanthi, strongly defending her employer's position in a tough market. While her predecessors, Salil Parekh and Baru Rao have moved on to larger global positions within Capgemini, Jayanthi's elevation should give the French firm's future a distinctively Indian flavour.

Manish Tandon, President, Citimax India
Manish Tandon has the energy level of a man who has had far too much coffee, but it is his plan for Gloria Jean's Coffees that is pumping him up. The Australian coffee chain has given Citimax's parent, the Dubai-based Landmark Group, an exclusive licence to operate stores in India. "Today, we have 15 stores, but we are looking at 45 outlets by March next year. Thereafter, we hope to add 60 outlets every year,'' says Tandon. To bring that about Citimax is likely to resort to franchising. Meanwhile, what sustains him is not just an assortment of coffees, but also a whole new menu that includes Australia's signature dessert - strawberry lamingtons.

Hari Marar President, Bangalore International Airport Ltd
When Marcel Hungerbuehler declined another term as president, the GVK Reddy Group-led Bangalore International Airport Ltd or BIAL did not have to look very far for a replacement. Hari Marar, 38, was already inside the terminal managing operations. Having been part of BIAL since September 2006, he has seen the airport take shape brickby-brick. The new Bangalore airport opened in May 2008 with a peak capacity of 11 million passengers a year. "I am humbled. It shows the kind of confidence and trust the management has in me,'' says Marar. And he has a big job ahead of him - to expand the airport terminal and almost double its capacity by 2015.