Life's hot
The competition in the Indian consumer electronics market may be heating up, but neither that, nor the north Indian summer, are daunting Soon Kwon, the new Managing Director of LG Electronics India, He recently took his wife and daughter to Agra to see the Taj Mahal. "It was hot, but I am travelling a lot inside India, talking to our people, dealers and customers," he says. "So we had to go to Agra when we could. I've always wanted to see the Taj." He says he has his work cut out for him, as LG's rival Samsung, also a South Korean company, pipped it for the first time in India in 2010. "We have some great new products on the way, and we are determined to be number one in flat panel televisions. We also want to improve our mobile sales," he adds.
-Kushan Mitra 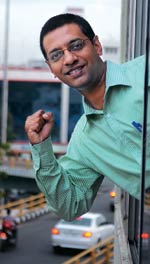 K. Bharat Kumar, Head, India Operations, Cumulux
Leader writer
Journalists do not usually grace these pages, nor, for that matter, do too many former journalists. But K. Bharat Kumar, the former information technology editor of the Hindu Business Line and an engineering graduate of the Birla Institute of Technology & Science, Pilani, has joined Seattle-based Cumulux as the head of its Indian operations. The company, founded by Paddy Srinivasan and Ranjith Ramakrishnan, two former Microsoft employees, is a cloud computing service provider and was named '2010 Global Cloud Partner of the Year' by Microsoft . On his career move, Kumar says: "After 15 years of asking questions about the information technology industry, I have decided to enter the industry to find some answers."
-K.R. Balasubramanyam James McGill, Executive VP and Chief HR Officer, Eaton Corporation
Talent factory
What do hardcore manufacturing types do when they are shifted to human resources? James Mcgill, Executive Vice President and Chief Human Resources Officer, Eaton Corporation, says: "We use manufacturing terminology for our HR strategy and initiatives.'' Read that as talent specification, raw material, production process, and distribution. McGill has been working hard to develop the global power management company's leadership pipeline in the country, by identifying the kind of people the $13.7-billion group needs. He is no stranger to this part of the world, having had India on his resume since as early as 1991.
-Shamni Pande

David Kohler, President and COO, Kohler
Toilet Tales
Is India ready for a Rs 6.5 lakh 'smart toilet'? David Kohler, president of the eponymous company founded by his great-grandfather, certainly thinks so. The Kohler 'Numi' features an interactive LCD touch screen interface, a heated seat, a foot-warmer, a built-in personalised bidet, a music system, and dual-flush technology. Kohler says that the Indian market is growing in the double digits, and is the world's fastest-growing for the brand. "We have invested $100 million here, and want to build our subsidiary with Indians who understand the market," he says. And why Kohler? "No other company can seamlessly combine high technology with high artistry like us."
-Anumeha Chaturvedi Harish Iyer
Medicine Man
The first time Harish Iyer, the new CEO of Shantha Biotechnics, heard about the company was in the late 1990s. His father, who worked for a multinational pharmaceuticals company, often talked about this "small biotech company in Hyderabad that was giving the multinationals a tough time". In 1997, Shantha launched the first indigenously developed recombinant hepatitis B vaccine, Shanvac-B. Priced well below its rivals, the vaccine was developed, manufactured, and marketed by Shantha. Now, Iyer tells BT that his goals are to ensure Shantha is recognised as the maker of the highest quality vaccines in India, and that it is the best company to work for. But his first challenge will be to regain prequalification from the World Health Organization, which had recommended the recall of Shan5, a vaccine produced by the company.
-E. Kumar Sharma