Gulu Mirchandani
The hard-nosed business sense of Gulu Mirchandani, 65, made him a natural leader at MIRC Electronics, even though he was just one of the three main promoters of the company that owns the Onida brand. Now that he is reportedly preparing to buy out the one-third stake of his brother Sonu Mirchandani in Guviso, the holding company of MIRC, his leadership and control of the company seem to have been re-affirmed.

The protracted negotiations over the price of Sonu’s stake, though, also reflect the pressures that were brought to bear on Gulu to give a better deal to the two other co-promoters.

He now has big plans for Onida. With more financial control and the issues with his brother moving towards resolution, Gulu’s business acumen should work better to execute those plans. 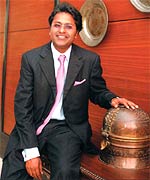 Lalit Modi
The business of cricket has never been so lucrative, thanks to the launch of Twenty20 IPL (Indian Premier League), the brainchild of BCCI Vice President and IPL commissioner Lalit Modi. A heady mix of glitz and glamour, IPL has also been able to generate huge revenues for BCCI.

At last count, IPL deals, including TV rights, team franchises and players came to $2 billion (Rs 8,000 crore). While India Inc. looks convinced about the product and its revenue model, Modi, 44, believes IPL has a long way to go before it can be tagged as a success story. Modi is a scion of the business family that owns tobaccomaker Godfrey Phillips.

He studied marketing at Duke University in North Carolina, where he learned about the major US sports leagues. Surely, that experience is coming handy now. Arvind Uppal
After hard work comes the reward. It took Arvind Uppal, 45, three years to turn around Whirlpool of India, the home appliances company that has been making losses for most part of the last five years.

The MD of Whirlpool’s Indian business has now been elevated to the role of the Asia Pacific Region Head (excluding Greater China).

Uppal can surely look back at his stint with pride. Next on the cards: Seeing the business through fast growth with new product launches and expansion of the distribution network.

An alumnus of IIT Delhi and FMS, Delhi University, Uppal continues to be Whirlpool’s India MD for now. But Asia has been Uppal’s backyard; this former Nestle executive spent several years in Vietnam and China, developing the market for the French food company. Time for him to replicate his success on the new platform.

Wipro’s lead duoThe imminent ‘son rise’ at Wipro, the soaps-to-software company, may have caught everyone’s fancy, but in mid-April this year, the succession plan at the firm took a different route with the appointment of not one, but two joint CEOs.

Both Paranjpe and Vaswani, who’ve been appointed as joint CEOs and Executive Directors, are long-term Wipro loyalists. “We’ve leveraged some of our skills to win large contracting deals in the domestic business (like the $600-million Aircel contract) and we hope this appointment will help us grow these synergies,” says Vaswani. With growth slowing, the rupee appreciating and MNCs on a warp-speed expansion of their India businesses, Paranjpe and Vaswani will have their tasks cut out in the next few months. Raghunathan Perumal
For a company that has hit the technology bull’s eye in the recent years, what’s the next logical step? “Strengthening the board,” Agile Labs Director and CEO Raghunathan Perumal would say. And that is exactly what his Bangalore-based technology company has done by roping in the former MD of Digital India, Mike Shah, 63, as non-executive Chairman.

A familiar face on the global as well as Indian IT turf, Shah heads his own consulting group M.S. Enterprises, which taps international business alliances and opportunities in software development.

An active angel investor, Shah has helped shape up a number of ventures like RelQ Software, iMorph, ICR Technologies, etc. At his new company, “customising and implementing business applications will not be expensive and time-consuming anymore”, he declares.

By all accounts, Agile can trust Shah to make the right bets for it. T.R. Baalu
T.R. Baalu, 67, The Shipping And Road Transport Minister and representative of the DMK in the UPA Government, is surprised that the conscience keepers of democracy have been offended by his stand that it is in good spirit if an ex-managing director continues to advance the firm’s business interest by exploiting his present position.

The case in point is the controversy surrounding Baalu seeking gas supplies at concessional rates for companies run by his sons. He also got the PMO to write eight letters between November 2007 and February 2008 to facilitate the same.

Innocently, he conveyed to Parliament that he was merely trying to get a fair deal for the company, its employees and shareholders. “What was wrong in it?” he asked. However, his apparent innocence has become an embarrassment for the government. Gas being in short supply, the issue has raised the spectre of crony capitalism.