Leaders who consistently think ahead of their time are a rare breed. A list of global Indians who put the country on the world map.

C.K. Prahalad
C.K. Prahalad (1941 - 2010)Paul and Ruth McCracken Distinguished University Professor, Ross School of Business, University of Michigan
Thought leaders who consistently think ahead of their time are a rare breed. So it was with deep sorrow that the world of business mourned the passing away of Professor C.K. Prahalad in April 2010. His breadth of expertise made him the foremost management thinker of his generation.

From managing multinationals to core competence, from the bottom of the pyramid market to innovation, Prahalad's range was exceptional. In 1960, at the age of 19, as a young physics graduate, Coimbatore Krishnarao Prahalad began working at the Union Carbide plant in Chennai. For many of his peers, getting a steady job was the pinnacle of achievement.

Not for Prahalad who four years later went to the Indian Institute of Management, Ahmedabad, for his postgraduate degree. By the time he was 34, he had a doctorate from Harvard Business School, having completed his thesis in a record 30 months. Prahalad always pushed the envelope on creativity and innovation.

His prognosis for India's growth was that by 2022 there will be 30 Indian companies among the top 100 corporations in the world, with the country accounting for 10 per cent of world trade and boasting the largest pool of trained manpower. "It will be a developed nation by many, many standards," he had said. "But I prefer that we still think of ourselves as emerging. If you already think you have arrived, then there is no need to experiment any more; no need to innovate."

A fitting tribute, then, that the country of his birth is being increasingly seen as the innovation hub for the developing world. Ram Charan
Ram CharanManagement Guru
How many management consultants engaged by the top 20 global corporations have gathered their insights at roadside markets from Managua to Varanasi? Just one, really. Ram Charan, a consultant who CEOs ranging from General Electric's Jeff Immelt to Coca-Cola's Muhtar Kent turn to for business fixes. Most of his learnings, the Hapur, Uttar Pradeshborn Charan says, came at his family's Bata footwear shop he helped run with 11 siblings and cousins. 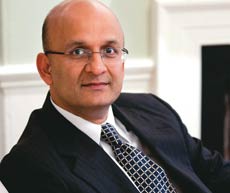 The first foreign-born dean of HBS is an expert on leadership and sustainable performance. Nohria received his BTech in chemical engineering in 1984 from the Indian Institute of Technology, Bombay.

"It prepared me for what I am today," he said of his days at IIT. At Harvard, he is focused on making his term a period of innovation and he sees HBS taking some lessons from enterprises in India.