Sukhinder Singh Cassidy,  the newly appointed CEO-in-Residence, Accel Partners, laughs when queried on how she would adjust from working in a maverick organisation like Google to a perceptibly more sober VC firm like Accel Partners. 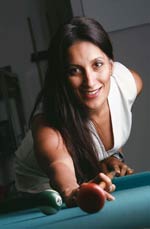 She lets out a full-throated laugh when queried on how she would adjust from working in a maverick organisation like Google to a perceptibly more sober VC firm like Accel Partners. “We aren’t all that boring, trust me,” assures Sukhinder Singh Cassidy, 39, the newly appointed CEO-in-Residence, Accel Partners, where she will be responsible for not just identifying companies to invest in, but also act as mentor to select existing portfolio companies. What prompted the change? While Google, where she spent six years—her last assignment was President for Asia-Pacific (APAC) & Latin American operations—offered her ample opportunity to increase her skill sets, Cassidy admits there was a burning desire to accelerate her growth in the next five years. This is why she has set herself a deadline of nine months to a year to identify a company where she can leapfrog into the CEO’s role. And what if she isn’t able to adhere to the timeline? “Yes, I will be a trifle disappointed, but then, I’d rather wait for the right opportunity to come along than give in to a ticking clock,” she sums up. Wise words, spoken truly. 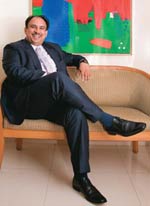 What’s most unique about Santrupt Misra, the CEO-designate of the global carbon black business of the Aditya Birla Group? The seasoned human resource expert has a shloka (Sanskrit hymn) to recite for every occasion—in the boardroom and about the slowdown. At the moment, Misra is Director on the Aditya Birla Management Corporation Board, the apex decision-making body of the Aditya Birla Group. He is also responsible for the Group Human Resources function, which consists of blue-chip companies such as Grasim, Aditya Birla Nuvo and Hindalco.The versatile industry veteran has shed IT from his profile because of the added responsibility. Ask Misra, 43, about any perceptible likeness in the two profiles, prompt comes the reply: “Every job has a unique profile, yet there are a lot of things common... it is about ability to lead a senior bunch of people.” He has a word of advice for the workforce that’s bearing the brunt of slowdown: “Look at the brighter side of things and use the downturn as an opportunity.” 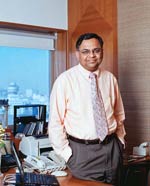 N. Chandrasekaran, 45, may not be the official CEO-in-waiting at the Tata Consultancy Services headquarters in Mumbai’s Fort area, but the world is quick to pronounce him as the likely successor to veteran S. Ramadorai, who is turning 65, the retirement age for the Tata Group executives, in October this year. Chandrasekaran, COO and Executive Director, has made it to the Business Week global list of ‘25 CEOs of Tomorrow’. What works in Chandra’s favour, as he is known within TCS, is his age as he has many more years left as compared to other contenders like S. Mahalingam, Chief Financial Officer and Executive Director, and Phiroz A. Vandrevala, Executive Director. Though Tatas have no dearth of top level talent, Chandra, a key member of the TCS Corporate Strategy Group, is surely the new power player on the block. By the time you read this, Captain G.R. Gopinath, 57, will probably know the outcome of his election campaign for the Bangalore South Lok Sabha constituency. Also, his latest venture Deccan Logistics would have taken to the air ferrying cargo around India and the world. So, how did India’s low-cost aviation pioneer end up as a delivery man? Gopinath recounts how, while he was running Air Deccan, two of his aircraft were rendered out of service in Kolkata and Rajamundry and the parts “took days to arrive”. Gopinath feels that the foreign majors such as FedEx, UPS and DHL connect “India to the world, but I want to connect India to India”. And his plans, much like before, have no bounds. With an initial fleet of three Airbus A310 and six ATR-42 aircraft, Gopinath’s cargo wings seem set to spread.

RBI Deputy Governor Rakesh Mohan, 61, has abruptly cut short his five-year tenure by taking up an assignment at Stanford University. Speculation was rife in September last, when he lost out to D. Subbarao for the RBI top job, that Mohan would be rehabilitated with a plum job at the World Bank. But this seasoned economist carried on as the RBI faced its biggest challenges with liquidity drying up. “The most challenging aspect of my stint was monetary management in an environment of volatile capital flows and inflation spikes,” says Mohan, who is now looking forward to completing his next book on monetary policy.