The solo traveller
Ankur Bhatia, Executive Director of Bird Group, a Delhi-based travel technology and services company, has his hands full steering the Segway Personal Transporter, which his group launched in March in collaboration with Segway Inc., global leaders in self-balancing personal transportation vehicles. "The product is not cheap - around Rs 4 lakh each," says Bhatia. "That's because of heavy excise duty. " Despite the price, he and his sales team have been able to convince quite a few people in India to buy the product. But Bhatia is keen to increase sales further. "Across the world, 1,500 policemen use Segways. Quite a few large retail and commercial establishments use it too to improve their security," he says. The Delhi Airport authorities have already deployed a few of his vehicles at the cavernous Terminal 3, and Bhatia expects more institutional sales soon. After all, the solo traveller is "fun to drive too".
-Kushan Mitra 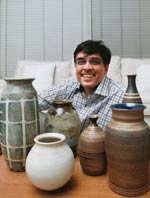 Ranu Kawatra
Lessons from pottery
He is an avid potter and enjoys "shaping and creating new things". When not at his potter's wheel, Ranu Kawatra, the new President and CEO of Pearson Education, India, tries to put the soft skills of this art form into his work. "Pottery teaches focus, patience and clarity of goals, crucial in any field but, perhaps, more so in the business of education," says Kawatra, who moved away from a sparkling corporate career that started with Cadbury, followed by Gillette (now part of Procter & Gamble) due to his interest in education. He was part of the team which created XSEED, a showcase curriculum product under iDiscoveri, an entrepreneurial entity focused on education. Today, heading one of the biggest educational publishing companies, his hands are full. Professionally, he hopes to see Pearson Education, India, emerge as a major centre of excellence in the next three years. At the personal level, the aim is simple: to become a more refined, better potter.
-E. Kumar Sharma

Rahul Munjal
Turning bills into cash
The surname is instantly recognisable. His grandfather Brijmohan Lall Munjal founded the Hero Group and his father Raman Kant Munjal led the company in its formative years before his untimely death. But Rahul Munjal is not a motorcycle buff nor is he interested in the family business. Instead, this young scion has taken the group into the services sector with Easy Bill, a service provider that facilitates payment of bills for a host of companies and utilities. The junior Munjal has turned Easy Bill into a behemoth, with 10,000 collection centres across 100 cities. Recently, the company also moved into air, rail and event ticketing. And Munjal is in no mood to put the brakes on. "In the next three years, I want Easy Bill to have 25,000 to 30,000 outlets." The senior Munjals may have to look up to this third-generation entrepreneur as they prepare to accelerate without Honda.
-Taslima Khan

Rishad Tobaccowala
Web Master
In 1993, even before the Internet had taken off, Rishad Tobaccowala, 51, set up the first interactive marketing agency - within the Publicis Group, the French advertising and communications multinational, with which he works. Since then, his career has been built around the development of online media. Based in Chicago, one of his missions within Publicis is to travel the world, spreading new ideas. With an average of 140 flight legs a year for the last five years, Tobaccowala is clearly doing a thorough job. Recently in Mumbai on one of his quarterly visits to VivaKi, the digital and media agency built to help marketers develop scalable and innovative digital solutions, Tobaccowala said: "The Internet is spreading all over the world as an advertising medium and it will be the same story for India. I notice that within Indian companies, digital has now become an important point of discussion among senior management, which was not the case two or three years ago." He had a word of praise for VivaKi too: "It has the largest digital group in India with 175 people and is very critical to Publicis's future growth."
-Anusha Subramanian Ashwin Deo
New Vino, New Bottle
Becoming an entrepreneur at 46 would be a turning point in the life of most people. But for Ashwin Deo, the former Managing Director of Moet Hennessy, it merely completes a full circle. After shifting gears from champagnes to beer, Deo is all set to launch his own wine label, Turning Point. How does it feel to be an entrepreneur? "Liberating," he says. Deo's experience spans spirits of all kinds, from beer to champagne, cognacs and wines. But why call his brand Turning Point? "The idea is to expand the market and get the new, nontraditional consumers to drink wine. I see a big potential in younger consumers," says Deo. With a unique packaging plan to market his products - easy to handle bottles which can be later used as lamps, chandeliers and candle stands - to an affordable range of wines, Rs 675 for 750 ml and Rs 375 for 375 ml - Deo say he is here to win. "It's about crushing the tradition and not the grapes," he says.
-Anusha Subramanian

Adam Gurian
Keeping Time
For Adam Gurian, a graduation gift from his wife is an exception in his collection of horlogerie - the only non-Timex he owns. "I have not worn that watch in 16 years," says the CEO of the Timex Group, laughing. Watches have undergone a remarkable change from being instruments to merely tell the time into fashion accessories. Gurian is working round the clock to further enhance the Timex brand by tying up with lifestyle majors like Versace and Ferragamo. Timex watches in the $40 to $100 range are still the most popular, he says, adding that he is keen on a bigger share of India's growing market. His favourite pastime: flying (he is close to getting a licence). For sure, Gurian is having the time of his life.
-Sunny Sen

People who dominated in news