Business leaders who made news

Hub, club, home and roam are the four mantras that she helped initiate as part of 'Blue Work programme' that seeks to get the most out of people at American Express. Kerrie Peraino, Senior Vice President, International Human Resources and Global Employee Relations with the financial giant, believes companies can add to their bottom lines by innovatively using the diversity of talent in their workforce. "By allowing people the flexibility to choose where they want to work and how, we save costs by cutting down on attrition. We also work more effectively by choosing the real estate footprint and, therefore, the cost and the kind of technology needed to maximise productivity," says Peraino. These are not empty words.

American Express is awaiting a patent for its Diverse Marketplace Intelligence analytical system that lays down the steps for leaders to get the most out of their teams and make them come up with successful solutions. Need examples? The company recently used its employees of Hispanic and Indian origins to work with the marketing team for designing its hugely successful seasonal gifting cards targeted at ethnic communities. At 66, most executives would be ensconced at a secluded farmhouse enjoying the bliss of retired life, but not Simon F. Cooper. The Hong Kong-based Managing Director for Asia-Pacific at Marriott International is presiding over the global hotel chain's bold decision to invest in India. It has just formed a joint venture with Samhi Hotels to launch its Fairfield brand here. Fairfield will be positioned above the Tata Group's no-frills Ginger brand. "There are people in India who will pay a little more for a hotel that offers that much more," says Cooper. Fairfield will join other Marriott brands like JW Marriott, Renaissance and Courtyard that are already in India. "We want to have 100 hotels here by 2015," says Cooper. "We are almost 60 per cent there when you count all the existing properties and those in the works." For Cooper, the new brand is a big gamble. And also a demonstration of his confidence in India.

After 25 years of handling some of the largest media brands in the country such as ESPNStar Sports, Star TV and NDTV, which he headed until March, 2010, Raj Nayak, 47, is now in the hot seat as the Chief Executive of Colors, the market-leading Hindi general entertainment channel from the Viacom18 stable. But to take up his new role, Nayak has had to walk away from AIDEM Ventures, the media consultancy firm he founded last year. "AIDEM is a professionally-managed company where very senior industry professionals are part of the management. They will definitely continue to strategise on what is the way forward," he said. "I am impressed with Colors and its progress within a short span of three years. It has changed the landscape of the Indian GEC space. Colors also has a team of talented people and my aim would be to continue to create newer benchmarks in the industry." Will he manage to keep Colors at the top of the entertainment pile? Watch the small screen. Sean Covey learnt about effective management principles from his father, Stephen R. Covey, author of the international best-seller, The 7 Habits of Highly Effective People. Over the course of his three India visits, the younger Covey, Executive Vice President of consulting firm, FranklinCovey, has lectured one and all, from managers at Infosys Technologies to schoolchildren in Hyderabad. He praises Indian managers, saying: "I've noticed a sense of excitement about the future." At the same time, Indians work too hard, he says. Increasing prosperity should not come at the cost of family, he says, which is what happened in Japan 30 years ago. "They lost a lot and family took a big blow." Which Indian business leader would he like to sit down with? "Azim Premji," he replies. 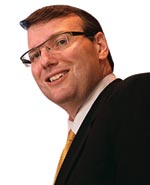 His best vacation to date was at an organic tea plantation run by a visionary farmer in Darjeeling. The place produced power from methane generated from cowdung. The experience might have scared off a fussier traveller, but Scott Durchslag specialises in offbeat experiences. As the newly appointed president of Expedia Worldwide, he oversees the online travel retailer's burgeoning India business. "It took us several years to understand the Indian market," says Durchslag. The company plans to target young, sophisticated and netsavvy consumers, especially those travelling overseas. Durchslag's typical customers are "adventurous and independent" and those interested in off-track destinations. Example: the long, rugged Dalmatian coast in Croatia in east Europe. His goal is to make Expedia one of the top five travel sites in India. "We're investing a lot on publicity," he says. "We are playing a bit of catch-up, but it's an important strategic market for us and we want to be here." In fact, Durchslag, who lived in Mumbai for a year in 1993, is already planning a vacation in Kerala.

People who dominated in news