Those who know Krishnan Ganesh call him a maverick, a maverick genius at that. Krishnan Ganesh, Founder and CEO, TutorVista
Those who know Krishnan Ganesh call him a maverick, a maverick genius at that. "Two things drive an entrepreneur. One is passion and the other, the stupidity to do it," he says. But to watchers it is genius that is driving this serial entrepreneur - his education venture saw its valuation touching Rs 1,000 crore in five years. Recently, British media group Pearson plc acquired TutorVista Global, the Bangalore-based educationcum-consumer Internet services firm, by increasing its stake to 76 per cent for a consideration of Rs 577 crore. The deal values the five-year-old company at $213 million. "I am not exiting; I am resetting the clock… and starting from here with Pearson," says Ganesh. Not for the first time, though. In 1990, he became CEO of his first venture IT&T, which was later sold to iGATE Corp. He and wife Meena Ganesh founded CustomerAsset, becoming a first mover in the business process outsourcing industry in 2000. It was later sold to ICICI OneSource and became ICICI Firstsource. In 2005, he started TutorVista, an online tutorial firm. He now wants to create a $1-billion company in three years. But that does not mean missing his daily tennis routine. 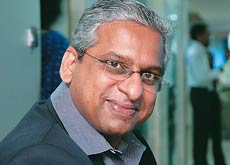 Ajit Isaac, MD and CEO, Ikya Human Capital Solutions
Serial entrepreneur Ajit Isaac plans to make his firm, Ikya Human Capital Solutions, India's leading human resources firm "like the kind which we can use as a springboard to get into other emerging markets''. After exiting his last venture, PeopleOne Consulting, when global HR firm Adecco came calling in 2007, he bought a substantial stake in Ikya in 2009 and has since gone on an acquisition spree. Isaac now wants to pilot Ikya into a leader in top-line growth and margins. Sandeep Arora, Director, Spiritual Luxury Living
Educating people is a noble quest, but educating people on the joys of whisky, as some would argue, is even nobler. Eight years ago, very few people in India knew about single malt whisky. Last year close to 700,000 cases of single malt whisky were sold, which, according to Sandeep Arora, Director of Spiritual Luxury Living, is an increase of over 100 per cent in the last five years. "There has been a major change in the way Indians have started consuming luxury spirits over the last few years. Not only is there access to these spirits today, there is also increasing knowledge of brands," says Arora, India's top whisky 'educator'. Some people drink on the job, for this man, drinks are a job. Amit Chatterjee MD, MSIDC
Amit Chatterjee is a 22-year-old veteran at Microsoft . Quite amazing when you consider that the software giant itself is just 35 years old. Chatterjee helped in the development of the earliest versions of Windows. An alumnus of IIT Kharagpur, he returned to India as one of the first at Microsoft India Development Center, or MSIDC. Now, as its MD, Chatterjee has in his hands possibly his hardest task - leading the transformation of MSIDC by providing thought leadership and "the next level of impact" for Microsoft in select areas. "We have come a long way... Our first focus then was to demonstrate that we can build products from India. By 2006, we were involved with 70-odd projects. We decided to focus on key strategic areas of ownership and instead of too many projects, we got to working on 18 to 20 key ones," he says. 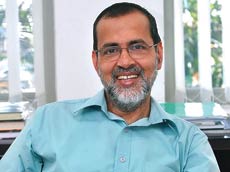 Kochouseph Chittilappilly, Founder, V-Guard Group
Corporate social responsibility and philanthropy among India's rich and famous are not new. But one industrialist has raised the bar that few can match. Kochouseph Chittilappilly, 60, Founder of the Kerala-based V-Guard Group, has offered to donate his kidney to an ailing truck driver. The inspiration came from a movement - Kidney Federation of India - started by David Chiramel, a Catholic priest. Himself a donor, Chiramel's initiative connects possible donors with the needy. Chittilappilly had experienced difficulties in finding a donor for a close relative two years ago. The relative's subsequent death set him thinking and he started making inquiries about the effects of kidney donation on the donor's health. "The doctors told me one kidney is enough to lead a normal life. I am proud that I am medically fit to donate a kidney,'' he says. 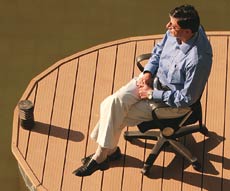 Phaneesh Murthy, CEO, iGATE Corporation
He clinched a hard-fought deal to buy Patni Computer Systems, a struggling software outsourcer three times the size of his firm. Now, Phaneesh Murthy, the 47-year-old CEO of iGATE Corporation, is getting rewarded for three months of hard work. The former Infosys Technologies sales whiz, who went out of the spotlight after quitting the software giant in 2003 over allegations of sexual harassment, has firmly re-established himself in the headlines once again. Not just for his gumption in chasing and closing the Patni deal, but also for having his basic pay at the NASDAQ-listed iGATE doubled from $500,000 to $1 million. The adventurous Murthy, who likes to choose one extreme sport every year to test the outer limits of his bravery (he went cliff jumping in 2010), has taken the long road back to stardom. Primentor, the firm he started after quitting Infosys, was acquired by iGATE. Since then he has spent sleepless nights transforming the firm from a rudimentary body shopper to an IT services outsourcer, culminating in the Patni deal for iGATE. Spotlight is nothing new for Murthy, only he is getting comfortable under it once again.