Thank you and goodbye
In the 21 months that Timothy John Roemer was the United States' Ambassador to India, the former Democratic Congressman saw bilateral ties between the two countries strengthen considerably. The highlight of his tenure was US President Barack Obama's visit to India last November, during which he addressed a joint session of two Houses of Parliament. However, the fact that Roemer announced his decision to quit a day after the Ministry of Defence ruled out the American contenders for a Rs 50,000-crore jet fighter deal, has led to intense speculation that it was this decision that torpedoed a "deeply disappointed" Roemer. "Our two countries are collaborating and partnering in almost every field of human endeavour...," Roemer said after resigning. Hopefully, his successor will replace the Ambassador's official BMW with something a bit more American.
-Kushan Mitra 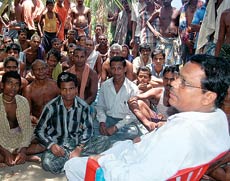 Abhay Sahoo, CPI Leader
Steely resolve
Abhay Sahoo, the paan-chewing Communist Party of India leader from Orissa, has pretty much singlehandedly drummed up the local opposition to the proposed $12 billion steel plant by South Korean company POSCO in Jagatsinghpur district. His latest salvo - even as the Environment Minister Jairam Ramesh okayed the project - has been to invoke the Forest Rights Act against the project and accuse the state government of having got permission by lying in a letter to Ramesh. Though Sahoo's alternative 'vision' of a betel leaf and nut processing hub at the site instead of the POSCO plant seems fanciful, his success is what drives anti-industrialisation protests.
-Kushan Mitra 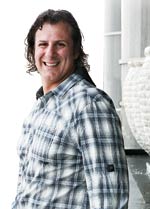 Sav Evangelou, Executive Creative Director, Digitas UK
Of chocolates and football
If you think chocolates have little to do with football, it is time you met Sav Evangelou to tell you how the two mix. As Executive Creative Director, Digitas UK, Evangelou spends a lot of time figuring out how brands should interact with consumers in the digital age. He believes most brands make misplaced investments with "a kind of desperate urge to fight for attention through a product message". Why not a more subtle engagement - starting an interaction, for instance - before a product is introduced? The digital medium certainly allows for such links to be built. Evangelou's agency tried this approach when it organised a football match in West Asia where both teams comprised consumers of the chocolate brand Snickers. The result? An online audience of 10 million people and a 36 per cent increase in sales. Indeed 18,000 even applied online to take part in the match! The online campaign and the match then led to a television documentary - a remarkable flip with the online media campaign being followed by the TV, rather than the other way around. Now that is some digital buzz.
-Shalini S. Dagar 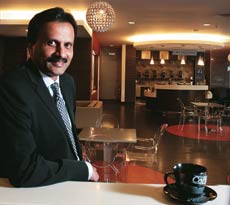 V.G. Siddhartha Chairman, Cafe Coffee Day
Midas touch
Long before coffee, V.G. Siddhartha, the reticent Chairman of Café Coffee Day, learnt investing from Mahendra Kampani, one of the founders of what today is JM Financial. The result of that experience, Way2Wealth, is today a chain of 500-plus outlets all over India. The 50-year-old Chikmagalur-born entrepreneur, with wide-ranging business interests in commercial real estate, infrastructure and hospitality, has now teamed up with Karnataka Bank to offer online trading services to the bank's clients from his Way2Wealth platform. The coffee guru can hope to hit big here even if a fraction of the bank's 4.84 million customers buy into the new service and turn stock market investors. "Kampani used to always say that the stock market is like a river of molten gold. Once in a while you should take some, cool it and set aside as your wealth," Siddhartha told BT in April 2010. Sound advice for Way2Wealth customers.
-K.R. Balasubramanyam M.G. Parameswaran (R) and Kinjal Medh Draftfcb Ulka Group
Literary encore
Eight print runs and a soft cover edition of their first case book, Brand Building Advertising, has paved the way for a second compilation of case studies. This one focuses on branding strategies and concepts. The authors are M.G. Parameswaran, 56, Executive Director and Chief Executive, Draftfcb Ulka, and Kinjal Medh, 51, Chief Operating Officer, Cogito Consulting, ad agency Draftfcb Ulka's consulting arm. The second book is not just a new revised edition, the authors point out. It includes 13 brands that Draftfcb Ulka has worked with and the strategies that they feel did exceptionally well. "We avoided case studies that focused on why a strategy didn't work because client sensitivity is paramount to Ulka," says Parameswaran. "The idea of the book," says Medh, "is to provide answers to questions that readers interested in branding might have. Why the advertisers did what they did and how the brand benefited."
Anamika Butalia 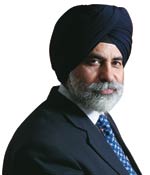 Sandeep Singh, Deputy MD, Toyota Kirloskar Motors
Tsunami victim
The recent tsunami-cum-earthquake in Japan has struck Toyota Kirloskar Motors hard. The company was first forced to cancel a celebratory function for its new factory and now has had to cut back production by 70 per cent. SANDEEP SINGH, Deputy Managing Director, Toyota Kirloskar Motors, who has taken his phone off the hook after being inundated with queries seeking reassurance that deliveries of Toyota's hot new sedan, the Etios, among others, will be prompt, is hardly a happy man. Singh told BT that the company was "communicating in a transparent manner with our customers and giving them a clear idea of the waiting period".
Kushan Mitra