Control is not leadership. Ashok C. Burman will always be remembered as the first corporate leader in India who dared to make himself redundant in his own organisation, and, in turn, inculcated in the 125-year-old Dabur India the spirit of corporate governance.

In 1997, he asked consultancy firm McKinsey to define a roadmap for the Rs 45-crore Dabur in which the family would move out of all active management roles, leaving these entirely to professionals. "That was my toughest decision," he told this correspondent - the last mediaperson to meet the 81-year-old patriarch who passed away on July 9. "But the reason we are different is that the family has stayed together.''

At that last meeting, the Chairman Emeritus of Dabur took a trip down memory lane. He recalled how insignificant he had felt after migrating to Delhi from Kolkata in 1972. "When you are in a small place and successful, there is little to prod you further. Our move to Delhi exposed us to different ways of doing things," he said. He joined the family firm in 1948 at the age of 18 and became a director two years later. In 1985, he became the chairman - the guiding force behind the fastest-growing consumer goods conglomerate in India. Looking back, however, he regretted not having devoted sufficient time to his education. "I married when I was very young and got involved with the company. But I am proud that my brothers had better exposure to education and the world," he said.

In his last days, Burman was confined to a wheelchair but remained keenly interested in the developments of the company. He often had old-timers, including Group Director P.D. Narang, call him to give him updates. These discussions would give him enough fodder to quiz his son Anand Burman, the current chairman. He revolutionised packaging techniques at the company in 1952 and later, as early as 1956, computerised the sales division. Peter Drucker could have been referring to this humble patriarch, when he said: "Management is doing things right; leadership is doing the right things."

More on Ashok Burman at www.businesstoday.in/burman

Anshu Jain, Board Member, Deutsche Bank
No language barrier
Anshu Jain is tipped to be CEO Josef Ackermann's successor at Germany's Deutsche Bank. While his investment banking record is unblemished, Jain's inability to speak fluent German had raised concerns about his suitability for the job among sections of the bank management. But Jain seems to have won the confidence of the skeptics, and is likely to co-head the bank with his board colleague Jürgen Fitschen. Will this result in more Germans taking to cricket? Jain, after all, was a co-owner of Mumbai Indians till 2010. Manasi Kirloskar, Director, Kirloskar Systems
Painter on the Board
Manasi Kirloskar, 22, the only daughter of Bangalore's industrialist couple Vikram and Geetanjali Kirloskar, has made a quiet entry into the family business. In her senior year at the Rhode Island School of Design in the US, she is now also on the board of Kirloskar Systems. The family's business interests include medical equipment, financial services and real estate. Manasi hopes to learn the ropes on her visits to her home town before taking up a more definitive role. She is also a trained painter. In her free time, she teaches art to underprivileged school children, imparting such skills as painting on T-shirts or making masks. She then raises funds for them by showcasing and selling their work. She champions community service and has come up with a model to help schools go about it systematically. "Community service should be made a part of the high-school curriculum so that privileged students realise that there are many disadvantaged children out there," she says. 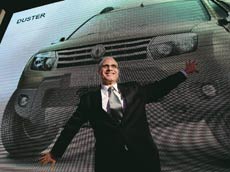 Marc Nassif, Renault India MD
Changing lanes
With rumours of an impending split between Bajaj Auto and the French car giant Renault following differences over their small car project gaining ground, Renault India Managing Director Marc Nassif was bombarded with questions by the media at an event. Nassif, desperately dodged salvo after salvo, but eventually blurted out that Renault and Bajaj were not driving down the same lane. But Renault has plans to roll out a small car in India from its own stable in 2012.
-Kushan Mitra Lady Gaga, Pop Sensation
Soon in India
Stefani Joanne Angelina Germanotta is due to visit India. Does it sound as good as the news of Lady Gaga's upcoming India tour? No, certainly not. But it is the same thing, for that is Lady Gaga's real name. The most successful singer of the last decade (sorry Justin Bieber fans), who has sold close to 20 million albums worldwide, has tweeted that she will be performing in India this October. This most successful entertainer of our times is also a smart businesswoman. Bollywood starlets better watch out!
-Kushan Mitra Jairam Ramesh, Minister for Rural Development
Power to you
Jairam Ramesh, green crusader and industry's most-hated UPA minister, must have done something right. He becomes more powerful after the Cabinet reshuffle on July 12. Elevated to Cabinet rank, 57-year-old Ramesh will now be in-charge of the aam aadmi portfolio - the Ministry of Rural Development. This alumnus of the Indian Institute of Technology, Bombay, and the Massachusetts Institute of Technology, US, reached his new office at 9.45 am on his first day, ahead of the rest of the staff. Close to the Gandhis, the Rajya Sabha member from Andhra Pradesh had prepared the UPA's 100-day agenda after the 2009 general elections. In his new role, the minister gets to monitor the flagship MGNREGS and pilot the crucial Land Acquisition Bill, which is high on the Congress's priorities. On a couple of occasions as the environment minister, he even got away with snubbing Singh. He probably knows how to do it the right way.
-Puja Mehra