Improved connection
After heading Nokia India for more than three years, D. Shivakumar will now be heading IMEA - India, Middle East and Africa - from January 1 next year. IMEA is one of the four newly formed regions Nokia has divided up its market into, the others being the Americas (North and South), Asia Pacific and Europe. The regrouping of markets will help the Finnish mobile phone giant, whose fortunes have fluctuated of late, respond to customers better, says Shivakumar. "We haven't listened to the market the way we should have done," he says. He will be shuttling between Dubai, where his new office is based, and Gurgaon, where Nokia India is headquartered. With more than 90 countries under him, Shivakumar will be a key strategist to develop the IMEA business for Nokia. The company is also focusing on a new series of smartphones which will hit the market later this year.
-Sunny Sen Stephen Lussier, CEO, Forevermark
Diamonds with dash
He studied psychology in college and puts that knowledge to use in his profession - selling diamonds. As CEO of Forevermark, the premium diamond brand from the De Beers Group, Stephen Lussier has decoded the psyche of rich Indians and their penchant for exclusivity. The Forevermark branding on a diamond assures buyers that it is of exceptional and rare beauty apart from being sourced responsibly. "Less than one per cent of the world's diamonds are eligible to become Forever diamonds,'' says Lussier, who has spent 25 years in the industry. "Each diamond carries an inscription and a personalised number.'' His strategy to increase diamond sales in India - already the world's fastest-growing market for the last five years - seems to be working. Launched in six Indians cities so far, Forevermark diamonds are selling well. "We hope they will account for 20 per cent of our global sales soon,'' says Lussier. "By the end of the decade, India and China will bypass the US as the largest consumers of diamonds." No wonder he spends the bulk of his time in this part of the world.
-N. Madhavan

Manish Kejriwal, Senior MD, Temasek India
Sailing in fresh waters
Manish Kejriwal loves water. His office and his home both overlook Mumbai's Marine Drive. His office desktop wallpaper is a grab of the waterfront adjoining United World College, his high school in Vancouver, Canada. The young Kejriwal loved sailing and today, at 42, he is ready for a new journey. After heading Temasek India for more than seven years as Senior Managing Director - a few of his marquee investments include Bharti Airtel, ICICI Bank and Mahindra & Mahindra - Kejriwal is starting his own fund along with two former McKinsey colleagues. After years in what was essentially a government job, it seems the son-in-law of Rahul Bajaj, Chairman, Bajaj Auto, has rediscovered his Marwari genes.
-Suman Layak 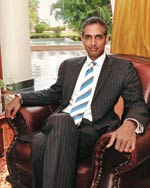 G.V. Sanjay Reddy, Vice Chairman, GVK Group
Reddy for Australia
He may be Vice Chairman of the GVK Group and the son of its founder G.V. Krishna Reddy, but G.V. Sanjay Reddy, 47, is best described as the new initiatives' leader of the group. Reddy, who made a social splash in June this year with the big, fat wedding he hosted for his daughter - where guests were ferried in and out of Hyderabad by chartered flights - will now lead the group's push into natural resources. He will manage the $1.25 billion acquisition of the Hancock coal project in Australia. "I am not relocating to Australia as I have enough responsibilities here... It will take up 50 to 60 per cent of my time over the next few years," he says. In Phase I, the new project is five times bigger than what the group has handled so far - the Rs 10,000-crore Mumbai airport project.
-E. Kumar Sharma Sumant Sinha, CEO, ReNew Wind Power
Strong tailwind
"An entrepreneur has to be prepared for neardeath experiences," says Sumant Sinha, Founder, Chairman and CEO, ReNew Wind Power, on the risks of running a business. Goldman Sachs plans to invest $200 million for a majority stake in ReNew and Sinha seems quite happy to be a minority owner. He is keen on building up volumes in the business before thinking of moving into other sectors within the renewable energy space. Ask him about the influence of his father, BJP leader and former finance minister Yashwant Sinha, on his career, and he says: "It is an interesting sidelight. Hope people do not treat it as the main highlight."
-Shalini S. Dagar
TweetYoutube