Ring in the new
Deepak Mehrotra, recently appointed CEO of mobile handset maker Micromax, knows the mobile business thoroughly. He spent eight years at Bharti Airtel, and was Director, Mobile Operations, when he quit to join Micromax. He also fondly remembers his challenging days at Coca-Cola earlier. "When I joined Coke, we were not the leaders," he says. One of Coke's triumphs during his tenure was the launch of the Rs 5 mini-bottle. Mehrotra's strategy for Micromax, which pulled out of a planned IPO earlier in 2011, is simple: build scale, increase market share, provide a range of handsets in various price bands, improve distribution and focus on services. "We can be in the list of the top brands globally," he says.

Harsh Mariwala, President, FICCI
Tackling the trust deficit
It is not often that the head of an industry body stands up to the Prime Minister. But Harsh Mariwala, President of the Federation of Indian Chambers of Commerce and Industry, or FICCI, has done just that. At a recent meeting of the PM's Council of Trade and Industry, Prime Minister Manmohan Singh expressed his displeasure over the way some business leaders had been openly criticising the government for its alleged inaction on reforms. Mariwala was quick to respond that the problem lay in the trust deficit between the government and the corporate sector. He added that the industry and the government needed to work together to resolve problems such as high inflation, which was pinching the industry. Mariwala also gave the government his wish list for the upcoming Union Budget, which included ensuring faster execution of pending projects in the infrastructure and power sectors, supply side reforms, and monetising of government assets to reduce the fiscal deficit. Pallavi S. Shroff, Senior Partner, Amarchand & Mangaldas
No disputing her ability
Pallavi S. Shroff, Senior Partner at leading law firm Amarchand & Mangaldas, recently won the award for the Best Lawyer in Dispute Resolution in Asia, given away by Euromoney. But she still remembers the early days of her 30-year career when clients would not take her seriously because she was a woman. She feels the award should be an inspiration for aspiring women lawyers. Poornima Shenoy, Founder, Latitude
Restless spirit
As president of the India Semiconductor Association, Poornima Shenoy, 46, was the face of the semiconductor industry. But, having quit the organisation a few months ago, she is now charting an entrepreneurial course. She has bootstrapped an education consulting firm, Latitude, which addresses education management and skills development. She already has two customers: the International Institute of Information Technology, Bangalore, and the new Indian Institute of Technology in Jodhpur. "We are developing content that will enhance the employability and vocational skills of degree and diploma holders in technical education," she says. "We want to do good, and benefit from it financially too." This is not her first foray into entrepreneurship: when she was 25, she set up Nexus Consulting, a headhunting outfit that went on to become No. 1 in the information technology segment. Shenoy sold it to e4e Labs in 2000.

Sunil Dutt, MD (India), Research In Motion
Shooting a new hoop
Sunil Dutt, 50, is a technology industry veteran. After stints with Nokia, Samsung and Hewlett-Packard, Dutt has just taken over as the new Managing Director of the Indian operations of Canadian company Research In Motion, or RIM, the maker of BlackBerry smartphones. "This is a company I have always admired, one that is deeply rooted in the enterprise space but still appeals to consumers," says Dutt. He feels that with more and more Indians buying smartphones, RIM, with its strong brand recognition, will do very well in the coming years. 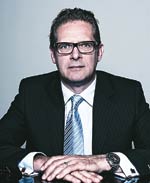 Jean-Claude Monachon, Head, Product Development, Omega
Time costs money
As the head of Product Development with Omega, Jean-Claude Monachon is the man behind every watch launched by the Swiss company over the past decade. He was in India recently to showcase his latest creation, the Ladymatic, which retails for between Rs 3 lakh and Rs 15 lakh. "Until now, all our ladies' watches were smaller versions of our men's watches. But we wanted to do something different, something specifically aimed at women," he says. He considers India an important market. "We believe that Indians have an affinity for exquisite timepieces," he adds. Monachon has also been working on the limited-edition Constellation and Speedmaster watches that Omega will release at the 2012 Summer Olympics in London.