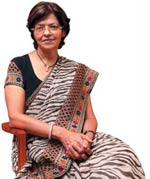 Kalpana Morparia
She is back. Kalpana Morparia, 59, is the new head honcho of JPMorgan’s India operations. What attracted her to the investment bank after working for 33 years in the ICICI Group? Says a confident Morparia: “It’s a great platform to lead in India.” She will accelerate JPMorgan’s presence in investment banking, wealth management and treasury and securities services. She will also have a seat in JPMorgan’s Asia Pacific Executive Committee. “There will also be an opportunity to participate in a global initiative,” says Morparia, who was Joint Managing Director until last year at ICICI Bank. While there are restrictions galore for foreign entities in India, Morparia says: “JPMorgan is here in India for the long haul.”

Readying for her second innings, Morparia—till recently the Vice Chair of the ICICI’s insurance, AMC, and securities subsidiaries—says: “I’ve imbibed everything from ICICI and that’s something I take with me to the new job.”

On a return path 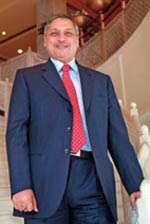 Ravi Uppal
He has been the face of Swedish power equipment giant ABB in India for the last two-and-a-half decades and after rising through the ranks to head the country business, he was elevated as Head (Global Markets) a year ago, and moved to Zurich to take up this role. Now, the 56-year old Ravi Uppal has quit and is headed back home.

This is his second move out of ABB; the first happened over a decade ago, when he moved from one Swedish giant, ABB, to another, Volvo, to run the auto major’s fledgling local operations.

Having helped both these companies set up and grow their India operations, it appears that Uppal is now turning his attention beyond ABB. According to an ABB media statement, he will be leaving the company “for personal reasons” and relocating to India to pursue opportunities “outside of ABB”. Given his successful track record with ABB and Volvo, Uppal (who couldn’t be reached for comments) shouldn’t be short of job offers.

Indra Nooyi
Indra Nooyi, 52, the India-born Chairwoman & CEO of PepsiCo., continues to accumulate power that comes with her stewardship of one of the world’s most visible multinational corporations. Forbes has elevated her stature from #5 last year to #3 this year in its annual ranking of the world’s most powerful women.

Nooyi is the world’s second most powerful businesswoman. Only German Chancellor Angela Merkel and Chairman of the US Federal Deposit Insurance Corporation Sheila C. Blair feature above her in the list. She has led the Fortune list of the most powerful businesswomen for 2006 and 2007. If that’s not enough, Conde Nast Portfolio magazine recently celebrated Nooyi as one of the “executive icons with distinct fashion sense.” Business and élan go hand in hand for this power woman. Lord Karan Billimoria
UK-based liquor baron Lord Karan Billimoria, 46, who drove around London with his business partner in a battered old Citroen 2CV to sell less gassy beer, is now in the news for supposedly wanting to sell the popular Cobra Beer that he established nearly two decades ago.

This comes in the wake of the news that the company’s talks on a minority stake sale to Diageo have fallen through. In fact, Cobra Beer even toyed with the idea of listing its Indian domestic subsidiary, to raise nearly $100 million (Rs 430 crore) for its operations here.

It should not find itself short of takers if it does choose to exit. Players such as UB Group, SAB Miller are thirsting for growth and a lot of it involves increasing market share through acquisitions.

Time, perhaps, for Billimoria to look for fizz in his decade-old wine business.

Santanu ‘sandy’ K. Baruah
Santanu ‘sandy’ K. Baruah, 43, is no Bobby Jindal, but the ascendancy of this Indian American— little known in India—in the US federal bureaucracy is significant. He has been Assistant Secretary of Commerce for Economic Development, heading the Economic Development Administration (EDA) under the US Department of Commerce.

He has now been appointed as the Acting Administrator of Small Business Administration (SBA), which supports small businesses across the US. The significance of this move lies in the US slowdown, which is making life difficult for small businesses, and some serious questions that SBA faces in terms of its credibility. Baruah, who could not be reached for comments, is said to be a sharp and hands-on bureaucrat. The right man in the right place, by all accounts.

Nikhil Puri
It’s a homecoming after a long sojourn. Unlike his colleagues who chose to take a break with a handsome severance package or moved on to JPMorgan, Nikhil Puri, the former MD in the global industries group of beleaguered investment bank Bear Stearns, has chosen to return to India.

He will be the Managing Director of Ambit Corporate Finance, a homegrown investment bank promoted by Ashok Wadhwa. Puri, who is in his early forties, returns to India after a 15-year stint across firms like Arthur Anderson and Lehman Brothers and insists his homecoming is not a defensive move. “The aspirations of Indian promoters have grown tremendously....Therefore, I think this is the right time to be on ground.” The doting father, however, hopes the transition is smooth for his family since his two daughters are very young.