Joginder Singh, New President/MD, Ford India Photo: G . Keshav Raj
Stopping and Starting
It was a promise he had made to the youngest of his three sons that prompted Michael Boneham to retire from Ford India. He had told the boy he would be back with the family in Australia by the time he entered his final school year. When Boneham took charge over five years ago, Ford was a marginal player in this country, with sales of just 30,000 units a year, plenty of unutilised capacity and zero presence in the fast moving small car segment. Today, Ford's presence in the small car market is sizeable, it has invested $2 billion in India, sale volumes have quadrupled to 120,000 units annually and market share doubled to 3.5 per cent. "We have laid a strong foundation for Ford's growth," says Boneham. Joginder Singh, who takes over from Boneham as President and Managing Director of Ford India, is a Ford veteran, having spent 32 years with the company globally. "We are in the middle of a growth story for Ford India. The foundation is in place," he says. The challenge for Singh, who hails from Dehradun and always wanted to head Ford India, is to effectively use the large capacity Ford's investment is creating. He is banking on the success of the eight new products -most of them in the small car segment - Ford will launch by 2015.
-N. Madhavan George Wong, Founder, GEORGEWONGDESIGN Photo: G . Keshav Raj
Great Characteristic
Every hotel should have a clearly defined character. "It is a hotel's character that makes you feel good. I prefer to use local history and culture to give it that character," says George Wong, 53, founder of the New York-based hospitality design firm, GEORGEWONGDESIGN (GWD). It is a principle he has followed conscientiously in his 30-year career in which he has designed or renovated 50-odd hotels globally. By his own admission, he faced the toughest challenge of his career only recently while designing the Park Hyatt at Chennai - his first hotel in India. "India has a rich culture and it takes time to understand it," he says. "I felt hassled initially. But once you understand, it turns into a big advantage. There are so many elements to draw upon from its rich heritage." What has India taught him? Among other things that "stone work is a nice way of bringing in understated elegance and subtle luxury".
-N. Madhavan

Bjorn Rosengren, President/CEO, Wartsila Corporation Photo: Aditya Kapoor/www.indiatodayimages.com
Power Switch
Bjorn Rosengren is President and CEO of Finland-based company, Wartsila Corporation, which makes and services power generating and related equipment, The company is currently undergoing a major transition, building power plants which can easily switch from using gas to renewable energy sources. "You need smaller power plants, and they have to be switching off and on very fast," says Rosengren. Wartsila focuses a great deal on markets outside the US and Europe - 40 per cent of its revenues come from Asia.
-Sunny Sen 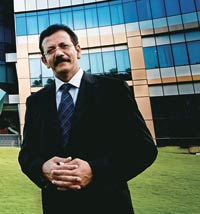 V.K. Mathews, Founder, IBS Group
Small Town Heavyweight
Thiruvananthapuram-based IBS Software recently signed a Rs 700 crore deal with German airline cargo service provider, Lufthansa Cargo AG, by which it will take care of Lufthansa Cargo's freight business, using its cargo management system called iCargo. It is one of the largest IT system deals awarded by the Lufthansa Group. "Lufthansa selected us from 400 competing solution providers. IBS will replace an Unisys system, which Lufthansa used for the past 30 years," says V.K. Mathews, Founder and Executive Chairman, IBS Group. But it is no fluke - the little known IBS already has British Airways, KLM, Virgin Atlantic, Qantas, All Nippon Airways, Emirates and other airlines on its client list.
-Goutam Das

Phillip Bernstein, VP, Industry Strategy and Marketing, Autodesk Photo: Aditya Kapoor/www.indiatodayimages.com
Making Sure the Future Works
Heard of Building Information Module (BIM) technology? It is a software tool that enables architects to visualise exactly how a particular building or project will look after completion, right down to its last detail, be it the flow of water in the pipes or the quality of the air. The man behind it was Phillip G. Bernstein, now Vice President, Industry Strategy and Marketing, of US-based 3D design and engineering software company, Autodesk. "About 30 per cent of the increase in costs in a project happens because of flawed designs," he says. "This can be avoided using BIM." The Petronas Twin Towers in Kuala Lumpur were built using BIM; it is also being employed in the Mumbai Monorail project, currently under construction. "Architecture is an expression of cultural values," he adds.
-Sunny Sen
TweetYoutube
Tags: People who made news last fortnight