In 'Pawar Save' Mode

Sharad Chandra Govindrao Pawar , 71, does not usually take combative public postures. Though the Agriculture Minister and Nationalist Congress Party chief has had his differences with his United Progressive Alliance partner, the Congress, ever since their coalition came to power in 2004, he has always given the impression of being a staunch ally. Indeed, only weeks ago he refused to back NCP co-founder Purno Sangma's Presidential bid, forcing Sangma to quit the party. Yet, just after the Presidential poll results, Pawar sparked a crisis by threatening to withdraw his party from the government and provide only outside support.

Obviously he was miffed. But why? "Sharad Pawar was always a responsible UPA leader," says Heavy Industries Minister Praful Patel, his party colleague and confidante. "But we were not being included in many decision-making processes."

That may not be the only reason. Perhaps the elevation of Defence Minister A.K. Antony to the No.2 spot in the Cabinet, after Pranab Mukherjee quit to contest the Presidential poll, upset him. Though NCP has only nine members in the Lok Sabha, Pawar held the No.3 spot, after the Prime Minister and Mukherjee, and may have expected a promotion to No.2. "NCP may be a small party, but the stature and experience of its leader should be respected," says another NCP insider.

Pawar, who first became a legislator in the Maharashtra assembly in 1967, has been chief minister of the state four times, He was even in the race for prime ministership in 1991, but later settled for the defence portfolio in Narasimha Rao's government. He has been in and out of the Congress, quitting for the second time in 1999 - after which he formed NCP.

There may be still other reasons for Pawar's annoyance. For someone who began his political career chasing away profiteering traders from the Pune mandi and helping farmers get remunerative prices, Pawar has been peeved by the various curbs recently imposed on sugar, milk and cotton exports, which affect sections of farmers adversely.

He was incensed when, in March this year, the Commerce Ministry banned cotton exports - the order was withdrawn later - without even informing him. He complained to the PM in April after a group of ministers limited cotton exports. Again, he was perhaps the only one in the government who pointed out the fiscal burden of implementing the Food Security Bill.

Yet his own performance as agriculture minister has hardly been spectacular. The agricultural sector has neither seen high growth nor reforms. The recommendations of the National Commission on Farmers have not been implemented. Until last year, Pawar held the Food and Consumer Affairs portfolio too, where he failed to control soaring food prices. His involvement in cricket management - first, as head of the Board of Control for Cricket in India, and later of the International Cricket Council - sparked criticism that he was not focusing enough on his ministry. The NCP has also had its problems in Maharashtra, where too it is in coalition with the Congress. A recent white paper on agriculture hinted at a potential irrigation scam, with NCP leaders allegedly involved.

For the time being, NCP has withdrawn its threat following the proposal to set up two coordination panels, one at the Centre and the other in the state, to give allies more say in decisions. If nothing else, Pawar has shown he cannot be taken for granted.

Jack Sim, Founder, World Toilet Organization
Heading 'the Other WTO'
When he turned 40, Sim Juek Wah, then a successful Singapore businessman, took on a radically new role. He gave up his business and turned to improving sa sanitation for the poor - but with a market-based approach. Popularly known as Jack Sim, he is the founder of the World Toilet Organization, or 'the other WTO' as he puts it, which has branches in 86 countries. Sim was recently in New Delhi to launch a mobile application called 'Sani Tool', which suggests the best 'toilet solutions' for poor and rural homes. "Poor people are also buyers," he says. "We want to shame them into using toilets." Sani Tool was developed by Grameenmobia, a social enterprise which works on technology solutions for the poorer sections. Sim is also a sculptor and likes to put up his sculptures on Singapore's streets without seeking permission. "They stay there for years... Someone needs to change the status-quo to make the world a better place," he says.

Sandeep Goyal, Adman-turned-entrepreneur
Ad-ding to his achievements
Sandeep Goyal may have sold his share in advertising giant Dentsu, but he remains as busy as ever. He is still involved with what he likes best: creative and media solutions for mobiles. "I work a lot with Airtel. Many advertisers do not know the basics of having the right presence on the hand-held device," he says. Along with launching mobile creative agency Mobocracy, Goyal has now launched Mobiwise to address issues of media optimisation. "In the future, almost 80 per cent of Internet search will be on wireless devices. Most clients do not have sites that are optimised for the medium. We offer creative solutions," he says. Goyal is also a passive investor in 'FoodFood' channel promoted by ace cook Sanjeev Kapoor. 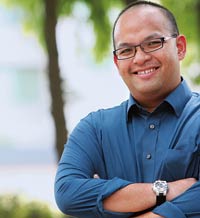 Effendy Ibrahim, Director (Asia), Symantec
Net Protector
India is high priority for Effendy Ibrahim, Director, Asia, Symantec, the world's largest security vendor. Not because of the ever-growing number of computer and smartphone users in this country, but because one in four of all malware infections originate from here too. "We are doing a lot in India," says the Singapore-based Effendy. Symantec has 3,500 employees here with Research and Development centres in Pune, Chennai and Bangalore. "Pune is our largest global innovation centre with 120 patents," he adds. In 2011, a year that saw a 93 per cent increase in mobile threats, Symantec blocked more than 5.5 billion threats globally. 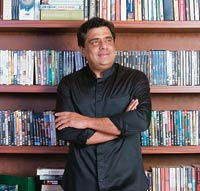 Ronnie Screwvala MD, The Walt Disney Company India
New Show
Rohinton 'ronnie' Screwvala is known for his signature style of launching business ventures, incubating them up to a point, and then selling them off when the time is right. Now, having sold his 19 per cent stake in UTV Software Communications to Walt Disney last year, he is sitting on a cash pile of Rs 900 crore. What does he plan to do with it? He will invest in companies engaged in sectors other than his core area of media and entertainment, he says. He sees immense potential in the social sector - rural health care, education and agriculture. His private equity fund Unilazer Ventures, with a corpus of around Rs 300 crore, will provide the seed capital. And wife Zarina Mehta is taking charge of their foundation SHARE, or Society to Heal, Aid, Restore and Educate, as Managing Trustee.