Lynn De Souza
She is arguably one of the finest minds in media planning today. No wonder, Lowe Worldwide has named Lynn De Souza, 47, Chairman and CEO of LMG (Lintas Media Group). That, however, is not her sole claim to fame. Multi-faceted De Souza is also a published author (A Dog’s Life), tennis champ, trained veterinary nurse and animal-rights activist. Incidentally, LMG and Lodestar Universal are the Interpublic Group’s (IPG) two media agencies operating in India. De Souza’s elevation comes after the other media units of the company—Digital Initiatives, Media Futures, Second Opinion, Insight and Interactions—were consolidated to form LMG. For her part, De Souza says the consolidation and creation of Lintas Media Group will only strengthen the agency’s position. It sure will, with De Souza in the driver’s seat. Narayana Murthy
Nearly a year after giving up day-to-day responsibilities at Infosys, the IT services company he founded with six others in 1981, Nagavara Ramarao Narayana Murthy, 62, is no less busy. Juggling an assortment of other responsibilities, he has now got yet another role—this time on the Board of Trustees of the New York-based Ford Foundation, a non-profit grant-making organisation.

Although Murthy himself couldn’t be reached for comments on his appointment, Kathryn Fuller, chair of the Ford Foundation Board of Trustees, said the Infosys founder “will play a critical role in advancing our efforts to improve lives and create opportunity for people throughout the world”. For the moment at least, a full retirement appears some time away for Murthy. Karishma Grover
Two decades after its fledgling (and home-grown) business started, Grover Wines is set to get its first in-house expert. This expertise comes in the form of 23-year-Old Karishma Grover, a third generation vintner, who unlike her grandfather and father, will use three years of undergraduate education at University of California, Davis, (in the field of Viticulture) to provide critical inputs to the business.

Her expert attention couldn’t have come at a better time. Grover Wines is more than doubling its crushing capacity and is in the final stages of introducing new variants. “I think our wine has improved tremendously over the last few years and the future looks bright,” she says.

There’s more. Before Karishma can actually get her feet wet in this business, she’ll be refining her craft with the ‘Flying Wine Maker’ Michelle Rolland in France later this year. 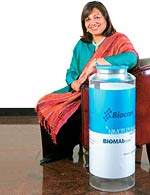 Kiran Mazumdar-Shaw
Kiran Mazumdar-Shaw, 55, the outspoken CMD of biotech major Biocon, has been among the most stringent critics of Bangalore’s crumbling infrastructure over the last few years, attacking the government for the tardy progress of several projects.

A few days after leading vocal protests by Bangalore Connect, an NGO, to keep the existing HAL Airport in Bangalore open, Mazumdar-Shaw was present at an offline briefing organised by the embattled Bangalore Metro, where she took a front row seat at the proceedings. “This is our city and we must be able to have transparency in the implementation of these projects,” she says. Mazumdar-Shaw walked the talk too; a day later, she led a rally in front of the old airport, demanding that the facility remain open.

Jandhyala Harinarayan
He pipped several other contenders to the coveted post and is set to steer the Insurance Regulatory and Development Authority (IRDA). Jandhyala Harinarayan, 60, former Chief Secretary of Andhra Pradesh, takes over from C.S. Rao as the new chairman of the authority. While his name was vetted by a search committee headed by Finance Secretary D. Subba Rao, Harinarayan’s impressive credentials easily clinched the job in his favour.

He was the secretary to the Union Ministry of Water Resources Development besides serving in various administrative capacities in Andhra Pradesh. He takes over at a time when the government is looking to push through crucial reforms in insurance, particularly in the non-life segment. Harinarayan will certainly need all his administrative acumen to take reforms forward in the face of significant political opposition from the Left.

B. Anantharaman
After spending close to seven-and-a-half years in Max India, B. Anantharaman has finally decided to re-define his career aspirations. While mum's the word for Ananth on his future plans, the man surely has something big on his mind with more than 24 years of rich and wide experience in the areas of finance and business. During his stint with Max India (ending on June 30), 53-year-old Ananth has been more than a confidant of Chairman Analjit Singh. It was Ananth who spearheaded Max’s restructuring efforts and successfully tied up the resources to fund the high-growth core businesses of life insurance and healthcare. As the joint managing director, he played an assortment of roles in the areas of finance, business and resource planning in the group’s diverse businesses of life insurance, healthcare, clinical research, healthcare staffing and specialty plastics et al. This experience will, by all accounts, come in handy for his future endeavours.