Mumbai-based Vu Technologies is one of the early movers in India's fast-growing smart TV space. But it has managed to hold its own against established rivals like Samsung, LG and Sony as well as a slew of Chinese companies like Xiaomi, Oppo and One Plus. The Rs 1,000 crore company claims to be the largest maker of 4K TVs in India and a segment leader in India's online marketplace. The company has not been impacted by India's decision to discourage sourcing of electronic components from its second-biggest bilateral trade partner, China, through higher tariffs, but is not too happy about the frequent changes in tariffs and policies in the country. This, it says, prevents manufacturers from committing funding to build own manufacturing capacities.

"From my perspective, the big challenge in government policy is that there is not much consistency. Every day, you read the papers, and suddenly the active duty is 20 per cent, and then 10 per cent. The point is, whether it's 10 per cent or 20 per cent or whatever, dont change the policy for five years," says Devita Saraf, Chairman and CEO, Vu Technologies. "When you do that, it's very harmful for entrepreneurs who take risk and set up manufacturing and then find that, suddenly, there's a political meeting and the policy is changed." Vu has a factory in Bhiwandi, though most of the large TVs it sells in India are assembled in China and have parts sourced from all over the world. 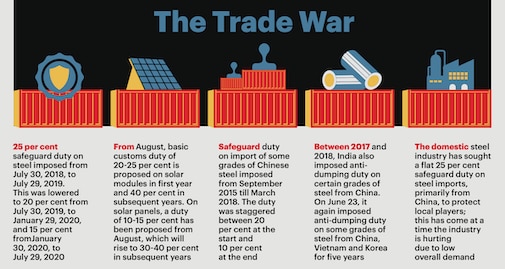 For all the talk of promoting locally made goods, be it in government contracts or household appliances, from a policy perspective, India's push for a self-reliant economy is fairly recent. The framework of the first two annual budgets of the Modi government after 2014 was to the contrary. Import duties were slashed on a host of products and their components such as LED/LCD TV panels, microwave ovens, solar equipment and laptops/desktops. It was only in FY17 and afterwards that duties on all these products were either partially restored or increased.

The trend of imports from mainland China and Hong Kong follows roughly the same trajectory. For example, imports of electrical machinery from the region rose from $14.81 billion in FY14 and peaked at $29.87 billion in FY18, before falling in last two fiscals. In case of other machinery, where focus of policymakers has been less intense so far, there is no decline yet. Imports were $9.61 billion in FY14, rose for a couple of years and stagnated around $14.67 billion after that. 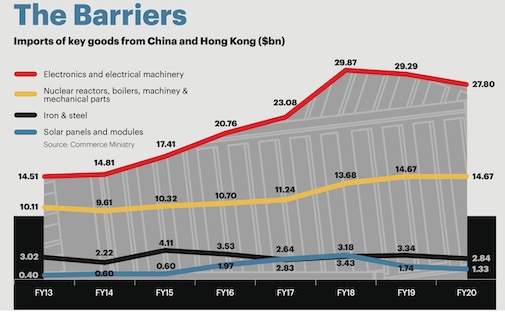 The slowdown, or stagnation, in imports is in tune with global trade trends. A decline in global demand will automatically impact import of raw materials to produce goods for exports. Growth in India's overall exports and imports had been declining long before Covid-19 disrupted supply chains and muted domestic demand. India's efforts to make imports from China expensive have led to re-routing, not just through Hong Kong, but also several South East nations like Singapore, Indonesia and Vietnam. This has caused a dip in import figures from mainland China, without a corresponding reduction in import dependence. The absence of clear classification of goods (HS Codes) also plays a role as goods on which there is higher tariff or anti-dumping duty are often imported under different tariff lines or simply under the "others" category. The government is attempting to plug most of these loopholes but the impact of its steps will be visible only in the medium term. The decline in value of goods imported from China and Hong Kong should thus be seen as the result of a combination of factors of which protectionist measures are just one part.

Import of solar panels and modules is perhaps the best example. Imposition of safeguard duties in mid-2018 to check import of solar panels from China has had little impact. Further, India's efforts to have 100 GW solar power by 2022 largely depend on Chinese equipment as the country accounts for nearly 80 per cent of India's solar panel and module imports. This cannot be substituted by local production in a hurry. Any ban on Chinese imports or substantial increase in duties is only likely to harm domestic power producers in the short term. "There was an attempt to curb imports from China with safeguard duties but it was not very successful. We are not in a position to self-sustain. China has the full value chain for manufacturing solar panels, modules and cells," says Ashish Khanna, Managing Director, & CEO, Tata Power Solar & President, Tata Power Renewables. "They also have the scale that makes them cost-effective. For us, till the time we have the full supply chain, any abrupt stoppage (of imports) will harm the industry." He adds: "We need a concrete policy that incentivises manufacturing of the full supply chain. It is capital intensive, but given the demand for renewable energy that India is projected to see, it is possible. Till we have the full supply chain here, stopping imports abruptly will harm the country.

Despite moderate success, the government seems to be pinning a lot of hope on such measures as it expects high tariffs, anti-dumping duties and mandatory standards to make India less reliant on China. It has already raised tariffs on 3,465 items in the last three years to protect domestic industry. According to the World Trade Organization's database, India has 92 anti-dumping measures against China in force, and investigations on another 11 are in progress. Similarly, it has initiated 203 sanitary and phytosanitary measures against WTO member countries, including China. In addition, Indias official standards setting agency, Bureau of Indian Standards (BIS), is bringing more products under compulsory quality certification. In the last six months, standards have been reviewed or introduced for steel, chemicals and fertilisers, air-conditioners, plugs and sockets, pressure cookers, electric cables, rubber hose for LPG, aluminium foil, toys, flat transparent sheet glass, etc, all aimed at making imports from China less attractive. The BIS has also notified that products such as LED modules for general lighting, keyboard, induction stove, ATM machines, USB external hard disk drive, wireless headphone, earphone, USB storage devices above 256 GB, electronic music system, etc, all mainly imported from China, will have to undergo quality compliance from October 1. The cumulative effect of these measures, Commerce Minister Piyush Goyal tweeted, will see the country in the "next five years fulfill our aspirations, encourage entrepreneurship and our businesses to grow, make quality products, become the global factory of the world, create new job opportunities and ensure a better future for every citizen of the country." Incentives and protectionist measures alone may not be enough to fulfill this dream. As Vu Technologys Saraf points out, lack of consistency in policy - like reducing and then restoring duties in a span of just three years - could reduce the appetite of industry to invest in manufacturing in the country. Some even believe it will be unrealistic for India to insulate itself from China and make each and every machine component in-house . Considering the tensions at the borders, expect a lot of action on the trade front.