Need a reason to get a new console? Here is a very good one.

There are many things you can buy for Rs 2,499. You can even get a mobile handset for that amount. But when it comes to pure entertainment, you cannot do much better than GTA IV. The game that takes place in ‘Liberty City’ (which is loosely based on New York City) is an amazingly detailed game. 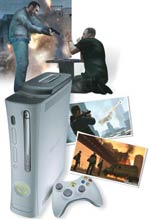 Pure entertainment
I have just about managed to get through a third of the way through the game—enough to get flabbergasted at everything, from the amount of detailing and the depth of the storyline. This game is a great continuation of the sex-drugs-andviolence-filled gameplay of GTA–Vice City and GTA–San Andreas.

This is not a “softy” of a game. The GTA franchise has never been a soft franchise. No whacking piñatas or alien characters here, but unlike earlier games, this one has a major change: character guilt.

Sure, the lead character Nico Bellic, a refugee from the Balkan conflict, blows holes in the brains of people, but there is a feeling that this guy is almost human. That is a remarkable thing to say about a game character, but then again, you are playing the game.

Now, gameplay is pretty similar to previous versions of GTA, and newcomers to the franchise might take a while getting used to it. But even more experienced franchise hands will find the new phone and Internet features pretty cool. Bellic has a phone that he can use to call people and surf the Internet to read about the aftermath of his actions. Plus, the game has a fantastic soundtrack.

Tracks have been remixed and re-mastered to throw in references to Liberty City. If you want to experience the sheer power of next-generation consoles and have no moral issues about doing certain things in the virtual world, get this game.

For the first time, the game has been released both on the XBox360 and the PlayStation3, so you do have a choice of machines to play it on.